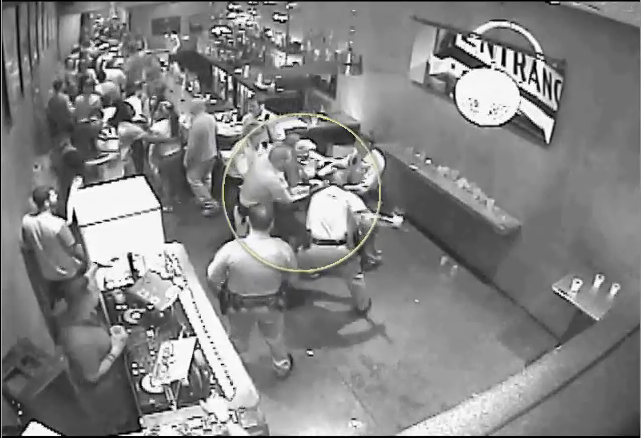 On June 4, 2014, Dominic Gennarino was beaten by members of the Las Vegas Metropolitan Police Department and arrested for “Obstructing a Public Officer”, specifically because the officers claimed that Mr. Gennarino was not moving fast enough.

The incident was caught on video. Below is the Youtube link:

https://www.youtube.com/watch?v=Qfs3YLE21p8 (It’s also embedded below at the bottom of this post.)

On August 20, 2014, multiple media sources reported on the beating. As a direct result of the media coverage, LVMPD Sheriff Doug Gillespie ordered that Internal Affairs re-open the investigation.

On December 15, 2014, after Internal Affairs concluded their 2nd investigation, Attorney Stephen Stubbs and Dominic Gennarino met face-to-face with LVMPD Internal Affairs Officers and were informed of the following:

2) There was a communication failure during the incident, and the officers should have communicated better.

3) Officers acted on erroneous perceptions and “mistakes of fact”.

4) Officers acted within then LVMPD policies and will not be disciplined. However, documentation of the incident is being placed in their personnel files.

5) LVMPD recognizes a “policy failure” and is not happy with this incident. Therefore, as a direct result of this case, LVMPD will implement “fundamental policy changes” in both its use-of-force policies and policies dealing with the investigation of use-of-force incidents.

The video below was submitted via the “Submit Your Story” page. It involves an incident that happened shortly after a stabbing at the Vanguard Lounge, a bar/nightclub located on what is known as Fremont East in Downtown Las Vegas. While members of the Las Vegas Metropolitan Police Department are clearing people out of the area where the stabbing occurred, Officer Glowinski apparently wasn’t happy with the pace at which a man, named Dominic Gennarino (possibly spelled differently), was moving and decided to arrest him.

What happened next is that all of the other Metro police in the immediate vicinity dove on and began beating Gennarino. In particular, one of them, identified as Officer Kolkoski, begins jabbing his nightstick into Gennarino’s body (the descriptions indicate he is hitting him in the legs, but it’s not real clear exactly where he’s being hit on the video because of the number of cops involved) with such enthusiasm that he looses his balance. The fact Kolkoski knocked himself down and appears to almost injure himself by hitting his head against a nearby table doesn’t seem to diminish that enthusiasm very much, as he subsequently has to be pushed away by another (as of yet unidentified) officer, in order to prevent him from resuming his attack with the nightstick.

As is mentioned in the description that was included with the submission, the video raises several questions about the “official story,” which was filed by Ofc. Glowinski as part of the police report (excerpts from which are included in the submission description). The first and most obvious is whether Gennarino should have been arrested in the first place. The claim that he “pushed back into” Glowinski is a complete fabrication that is in no way supported by the video.

Also, the idea that he should have been moving faster or refused to do so is dubious from the start because there is a rather visible and large crowd in front of Gennarino, which would prevent him from doing so, even if he wanted to. While you can see what appears to be some verbal exchange between Ofc. Glowinski and Gennarino, arguing with cops isn’t an arrestable offense and even Glowinski admits in that police report that he “complied” with his orders to leave the area. So, at best (from Glowinski’s standpoint) Gennarino was not complying fast enough to satisfy him and at worst that was simply an excuse to justify beating and arresting an innocent person because a member of the LVMPD had a personal issue with that person.

Secondly, in the video Ofc. Kolkoski has his nightstick out and is swinging it immediately. Prior to that, there is no visible sign of Gennarino jerking or pulling away, as claimed. The idea that he could determine that such a tactic was necessary with a half dozen other cops (none of whom are using nightsticks or any other weapon) already on him that quickly is another incredibly dubious aspect to this incident. Further, the fact another officer has to stop assisting in the arrest to restrain Kolkoski and prevent him from continuing his assault on Gennarino (about 0:30) casts doubt (to put it mildly) on that idea. That’s even more so the case, since after he is prevented from continuing his attack, he simply stands back and watches as the other cops arrest Gennarino. Also, in spite of what is stated in the report, the entire video only lasts 1:30 and the portion with the arrest takes less than one minute. So, the claim that they had to struggle for several minutes after he was on the ground is, at the very best, an exaggeration by Golkowski.

Of course, you can watch the video and judge for yourself (that’s one of the reasons Cop Block encourages people to record their encounters with people wearing badges) whether this was justified or yet another case of the LVMPD’s unnecessarily heavy-handed tactics that have become so common place in the Las Vegas area, especially downtown. One thing you can be sure about is that, regardless of what you or anybody else outside of the Las Vegas Metropolitan Police Department thinks (including the department’s Use of Force Board that is supposed to prevent this type of thing, but that the sheriff is under no obligation to actually listen to, so it doesn’t), this incident will be “investigated” by other people working for Metro and then declared justified. The history of Las Vegas area police departments pretty much guarantees that. The fact that the cops working for those departments know that pretty much guarantees that these types of incidents will not only continue, but will become more numerous, unless people in Las Vegas put enough pressure on them that they have no choice but to reign their enforcers in.

The original video, which has been embedded below is available on the youtube channel of Las Vegas attorney Stephen Stubbs, who currently does monthly (every last Thursday) free “Know Your Rights” seminars within the Las Vegas area. He also was himself featured recently in a post on Cop Block and NVCopBlock.org after an incident in which he personally was arrested for refusing to leave the side of a client that had requested him as an attorney while being detained by members of the LVMPD.

The text in quotes below was included in the original submission and is included as it was received, without any editing.

“This poor man wasn’t moving fast enough as police tried to clear out a crime scene for investigation. So, LVMPD grabbed him and LVMPD Officer Kolkoski (P#10002) began immediately to beat him with a night stick.

In LVMPD Officer Glowinski’s own words:

“I again instructed [him] to walk towards the rear of the lounge. [He] complied, but began walking slowly.”…”Despite most people complying, [he] would not. As we reached the DJ Booth I instructed [him] one more time to move more quickly”

“[He] stopped, and leaned back and threw his back into me. I took hold of [his] right arm in an attempt to take control of him. [He] pulled away. I grabbed his right arm and Officer Werner (P#13017) grabbed his left arm. In an attempt to place [him] under arrest we instructed [him] to go to the ground. [He] refused by pulling and jerking. Additional officers attempted to assist in taking control of [him] but it was unsuccessful. [He] only began to comply after Officer Kolkoski (P#10002) used a baton to deliver focus strikes to [his] legs. After [he] went to the ground it still took me and several officers several minutes to place [him] in custody.”

If you compare the video to the official sworn statement, you will see that Officer Glowinski does not tell the truth. The victim did not “lean back and [throw] his back into [Glowinski]”, the victim did not resist (no pulling and jerking and the victims legs are completely limp after he lays on the ground), and Officer Kolkoski immediately began to beat the victim with a baton (victim had no time to comply). It did not take “several minutes to place him in custody (The entire encounter lasted a little over a minute).

The one positive part of this encounter was the officer that physically stopped Officer Kolkoski from continuing the beating.”