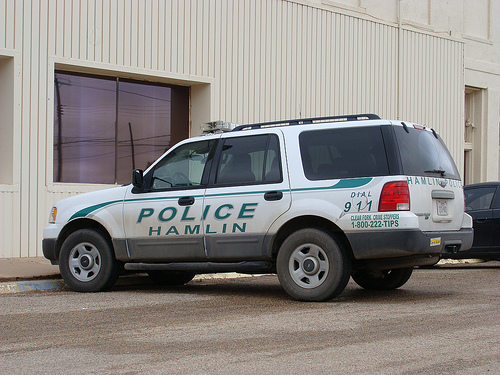 A reader, named Wendy Robins, shared the content below, regarding the service several employees of the Hamlin, TX Police Dept. provided to her, via the Cop Block Submissions page. On November 2, 2014, I was walking home from buying some items at the local grocery store. I was approached by Officer Chad Boyett a block and a half away from my home, which I own. Officer Boyett passed me and did a U-turn at the intersection in front of me and then pulled up beside me. I continued walking as he asked me where my auto was. I told him it didn’t matter because I was walking and that I didn’t have time for this, so I was going home.

He got out of his auto and ran around to me, approximately 3 feet from his auto, forcefully gripped my arm and drug me to the front of his auto. He kept asking where my auto was and stated he knew I had been driving without a license. I informed him he can’t do this and to call the Chief of Police, Bobby Evans. He said he didn’t have to call him and that he was writing me citations for driving without a license and expired registration.

I again stated he can’t do that and that I thought he was harassing me and again asked him to call the Chief of Police, Bobby Evans. I stated that I would not sign the citations and he gripped my arm tighter, resulting in bruising, and stated that I was being hostile and that now I’m going to jail and that I could tell it to the judge. He slapped the cuffs on me so tight and fast that my only thought was……I need a witness. I raised my arms in cuffs above my head and yelled at the top of my lungs to the first passing auto I saw.

The man did a U-turn at the opposite end of the block and pulled up across from us and asked what was going on. Officer Boyett told him he had everything under control and that he didn’t need to worry about it. Knowing the man, I asked if he could take my groceries to my home. The officer refused. I simply told the man to inform my husband that I was going to jail for walking without a license. The man later wrote his statement proving there was no other auto at the place where I was arrested, only the police auto. I was taken to the Hamlin Police Department for quiet some time while paperwork, etc., was being done.

I asked for a cigarette before I had to be transported to the jail. I was told by Officer Boyett that if I was quiet he would let me. I was placed in front of the police station in a chair in handcuffs on the main street for public display intentionally. This was humiliating simply because I do not break the law, nor go to jail. Prior to having the painful cuffs moved to the front I had asked many times to turn or loosen them and denied. At this point Officer Boyett asked what was in my pockets. I told him I had a two pack lighter in my back pocket and my credit card in my front pocket, which I attempted to get for him when he slapped my hand back and said he’d get it. I stated as he slid his hand in my pocket that I’m not comfortable with him doing that and he stated I didn’t have a choice. I informed him I could say he touched my hoo hoo.

I was read my rights finally and loaded by Officer Nick(?) for transport to Jones County Jail. The officer dropped off my groceries to my husband and informed him I was going to jail. No one could tell me what my charges were. Upon arriving at Jones County Jail, jokes were made by the jailers and the transporting officer regarding the arresting officer and his tactics. I was booked in after a long wait and instantly asked for someone to take pictures of my arm where it was bruised and the redness from the cuffs many hours later. Later, they complied and stated only the Chief of Police, Bobby Evans, would get the photos. This was on a Sunday, so I had no choice but to stay the night in jail. How humiliating, how unjust, how……..!!!

Still no one could tell me what my charges were, why I was in jail. After lunch the next day, I was called to talk to a judge at the jailers station. The judge only told me I was being charged with driving without a license and expired registration and that my bond was $500 on each charge. After a bondsman got me out and took me back to Hamlin, I discussed things with my husband and walked to the police department for court, which I was told I had up to 10 days to see the judge. I told the judge I was walking and not guilty and agreed that he and the Chief of Police could review the audio and video and agreed that if I wasn’t driving the charges would be dropped and if I was I would pay the fines.

I filed a formal complaint on Nov. 4th and gave them ample time before requesting the status of my complaint. I requested to discuss it with the Chief of Police and denied by stating they sent me a letter and refuse to discuss it until I receive the letter. The letter only discussed the humiliation and excessive force stating they stand by the officer and that he did nothing wrong. I called a meeting with Chief Evans where he stated he knew I was NOT driving and I submitted my request for audio and video. The officer NEVER turned on his lights, so I knew there was no video.

The Judge informed me a few days later at my request for status again that he refused to view the “video” now. I don’t understand that, but I was given a day to appear at a “court” between me and the city attorney, ex crooked mayor, alone. When I entered he asked if I knew what the fines were for my charges. I stated I didn’t care because I’m not paying them. I placed in front of him the paper charging me with driving without a license and placed my license on it then I placed the other paper charging me with expired registration with the title, bill of sale dated Dec. 3, 2014 for the auto he stated I was in and proof of inspection which would have dismissed the charges but I said one thing he didn’t like……I have an attorney…..so nothing was dismissed. My attorney is a civil rights lawyer from Houston and is currently investigating my case. I do worry they can get to him. HELP ME GET JUSTICE

NOTE: No permission is needed to share this post, or any content housed at CopBlock.org.
Ideas have consequences – the more good ideas are shared the better we all are.
Help fuel our efforts – donate Bitcoin: 1D6hdGKcFfzciJaMSLU6X1Tq69fcCsEh65