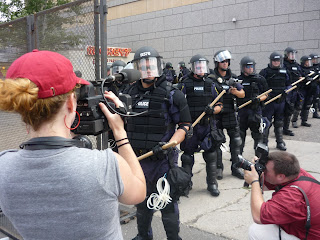 I’m always searching for content to post on Cop Block.  The sad thing is – there’s no shortage of police brutality or abuse stories.  What’s even more sad is how often I read an article, like the one below, that defends cops for their actions.

So it has become some what of a routine of mine to break down these articles and take them to the next level.  By expanding on the thoughts of the writer and interviewees.

The article was posted on The Daily Caller by Don Babwin and discusses the scrutiny cops face when their actions are caught on film:

Minutes after a suburban Chicago police officer was charged with striking a motorist with his baton, prosecutors handed out copies of a video showing the beating — taken by a dashboard camera on the officer’s own squad car.

In California, after a transit cop and an unruly train passenger slammed against a wall during a struggle and shattered a station window last fall, video from a bystander’s cell phone was all over the Internet before the window was fixed.

The same cell phones, surveillance cameras and other video equipment often used to assist police are also catching officers on tape, changing the nature of police work — for better and worse.

Some say cameras are exposing behavior that police have gotten away with for years. But others contend the videos, which often show a snippet of an incident, turn officers into villains simply for doing their jobs, making them targets of lawsuits and discipline from bosses buckling to public pressure.

I’m one the believers that cameras are exposing police activities that have gone on for far too long.  Whether it’s a ‘snippet’ or an entire video, police are supposed to be the most purest members of a community.  People who remain calm, cool and collected in any type of situation.  The argument that they’re ‘simply doing their jobs’ is wrong.  There’s never a reason to beat, tase, shoot with rubber bullets or to use any other form of force on some who doesn’t follow police ‘orders.’  Which is what most the videos here are about.  Non violent, non victim crimes that end up in a police ass whooping because the ‘criminal’ questions or lips off to the officer(s).

We need to ask ourselves, who’s supposed to be the better person in terms of police encounters?  And if you can’t keep your cool to mouthy teens, or an upset mothers of three then you’re in the wrong profession.

“We tell our officers all the time you’ve got to assume that everything you do is going to be videotaped,” said Chicago Police Superintendent Jody Weis. “Everyone has a cell phone and almost every cell phone has a camera.”

In the video, Mandarino is seen firing a Taser at a passenger in the car and then striking Bell, who is on his knees with his hands on his head. Bell suffered a concussion and cuts that required seven stitches.

“It’s a wonderful tool,” Alvarez said of the video, which she says suggests that both men posed no threat to the officer.

Though police-behaving-badly videos have become popular staples of cable news shows and the Internet, Weis said he doesn’t believe his officers are overly cautious out of fears they’ll be videotaped — and their superiors are not advising them to be.

Quietly, though, some officers say the prospect of being videotaped makes them hesitate even if they know they should act.

“I’ve heard from officers who are sent to break up a fight in the street and see a group of people leaning out windows with handheld video cameras … they go slower and are less aggressive,” said Tom Needham, a Chicago attorney who has represented several police officers.

This quote is a good thing.  Cops shouldn’t be rushing onto scenes ready to match the aggression of a fight with force.  If cameras are responsible for this, I say GREAT!  I wonder how many police beatings this has saved.

“My own view is that YouTube has done more to expose the reality of police abuse than all the blue-ribbon commissions combined,” said Futterman.

A Chicago police officer who was arrested three years ago in the videotaped beating of a female bartender never would have been charged much less convicted if not for the video, Futterman said. Anthony Abbate initially was charged with a misdemeanor until the video played across the world.

Ronald Bell’s brother, Stacey Bell, said he doubts the Streamwood officer would have been charged with felony aggravated battery and official misconduct without the video and his brother still would have faced charges of drunken driving and resisting an officer, which were dropped.

All the more reason to adopt the policy of always carrying a camera on you.  No matter where you go.  You don’t know what could happen and as  stated above; without video proof of police doing wrong it’s a hard sell to get accountability.

But some caution that incidents caught on tape can misrepresent police work.

“The work of a police officer, even when done properly is … not pleasant to watch,” said Al O’Leary, spokesman for the Patrolmen’s Benevolent Association in New York City. “We’ve had situations, circumstances where an officer doing his job by the book is caught on video is tagged as brutal. Sometimes the work is brutal but necessary.”

I assume the author was trying to give a rounded view on the matter but this quote is off the wall.  Police work isn’t pleasant to watch, no kidding.  Police are routinely harassing people for non violent, non victim crimes.  Everyday their job seems to become more and more about revenue generating than protecting people. Until that changes you’ll only see more of this.

What’s more, video viewers rarely hear the frantic 911 call for help, rocks hurled at an approaching squad car or the countless times police have been called to the same house.

In New York City in 2008, a man died after falling from a building ledge when police jolted him with a Taser. Video of the last few moments, including Iman Morales’ fall, was posted on newspaper Web sites and played over and over again on local TV.

But before the cameras were running, “this guy was stark naked, running up and down the fire escape, he tried to get into a woman’s apartment by tearing out the air conditioner, terrifying the woman,” and swung a fluorescent light bulb at police before Lt. Michael Pigott ordered him shot him with the stun gun, said Tom Sullivan, president of the NYPD’s Lieutenants Benevolent Association.

Eight days later, Pigott — stripped of his gun and badge and demoted — committed suicide, leaving a note saying he was trying to protect his men. His widow, who is suing the police department, said the discipline humiliated her husband. The department declined to comment.

There is little chance that the videotaped scrutiny of police will slow. In fact, groups with video cameras follow police in cities all over the country..

This last story, tragic as it is, still gives no excuse for police to shoot a man with a taser.  I mean he ‘tried’ to get into someones place? He was ‘terriftying’ woman and swung a light bulb at officers, who are wearing bullet proof vest? Again, it’s tragic and there might have been no neat way to handle that situation.  This man was acting a fool but I assure you that he could have been taken down without a taser.  How about five cops jump on him?  Or they could have waited to tase him or had tased him off the ledge, that would have been smarter.

But if you look at big brother (government), who the police work for, you can then see how their laws and regulations harm or cause most of these scenarios.  Like the one above, if people in NYC were allowed to protect themselves, with guns or non lethal weapons, then this could of ended quicker and safer.  If the police didn’t hold a monopoly on force, along with the eagerness to use it,  this could of ended differently.

Maybe police wouldn’t feel so attacked by this topic if we just privatized police all together.  Allow those who want such services, without the violence, to prosper.  Giving people the option to use their wallets to manage out of control security forces. Those who violated people’s rights wouldn’t be in business long.  It would also be a hell of alot easier to get accountability from a private firm than one who’s backed by the very system you’ll try to take them too.  Just a thought.