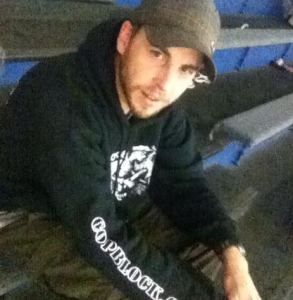 Note: This was originally posted at the Nevada Cop Block website by Kelly W. Patterson. Also, since this was written it was revealed that Dustin’s mother was actually the one that turned him into the police in an email, in which she stated, “I’m not sure if he’s safe to ever be in the general public.”

Recently, it was reported that Dustin McCaskill was arrested here in Las Vegas for making threats on Facebook. There is some room for arguments about whether the First Amendment applies in this case, but unlike some other recent cases, Dustin has made specific and persistent threats for well over a year.

One of the things mentioned in the article is that these threats were made on Dustin’s “Colorado Cop Block” Facebook page, which has apparently been removed by someone (possibly FB, but as far as I know, the person and exact reason is not known, at this time). There is a bit of context that needs to be added there. Because of violent threats of the same nature both against police and other citizens on Dustin’s previous CB page, “Southern Oklahoma Cop Block,” which was eventually removed by FB as a result of the threats, Cop Block publicly disassociated itself from Dustin and SOCB last year (almost exactly one year ago). Not only was a post made on the main page explaining the reasons for that action, but SOCB was removed from the directory of official CB pages and content generated by that page was no longer accepted for reposts, either on the site or the main Cop Block FB page.

Later, after Dustin moved to Colorado, he again tried to use Cop Block’s notoriety to gain attention for himself, by creating the “Colorado Cop Block” page. This was even after he had himself claimed he didn’t want to be associated with Cop Block and had only kept “Southern Oklahoma Cop Block” as the title of his page because he wasn’t allowed by Facebook to change it. He also had created several anti-Cop Block pages, including one named “Cop Block Exposed” (which actually predated the Cop Block Exposed page that got a bit of attention recently by “exposing” really easy to find information and pictures about some of the members of CB and prompted him to complain about his page being the “original” CBX page).

It didn’t take long before he was posting violent threats again and had actually escalated to the type of things that got him arrested. So, it also wasn’t long before another post publicly disassociating Cop Block from Dustin and his pages was posted. Instead of listening to that advice about avoiding aggressive behavior, Dustin ran around Facebook posting insults and threats to the admins (myself included) of any of the affiliate pages he could find that had shared that post and stating that admitting to the FBI that he made those threats, as well as the threats themselves, were “the way to get things done” or some variation of that.

We can have discussions about when and if people should defend themselves against aggression by the cops, which is something Cop Block has done in the past, as evidenced by the “controversial” (mostly among people that have never watched it) Larken Rose video “When Should You Shoot a Cop?,” which discusses that very issue. Also, as stated, there is some level of argument that can be made about the First Amendment protection of speech vs. actions. However, making public threats (that Dustin obviously wasn’t even capable of carrying out) isn’t actually the way to get anything done, but more realistically, just a good way to get yourself put in prison, where you can’t do shit but sit and stare at a wall, or maybe even get murdered yourself.

The real moral to this entire story is that, unlike the police, Cop Block does blow the whistle on people that are potentially dangerous and that aren’t upholding the purpose and principles of Cop Block as an organization. Rather than making excuses for and covering up for Dustin, when we saw that he might likely do something that would reflect badly on all of us and prevent us from doing the positive mission that we set about to do, we publicly disassociated ourselves from him and warned others that he did not represent us or our goals as an organization. As has been stated numerous times, Cop Block is committed to non-aggression in our efforts to eliminate police abuses and aggression from them against others.

In addition, as I personally stated in a post the morning before I and three other individuals were arrested for peacefully and legally protesting the incredible lack of accountability by the LVMPD in August of 2013, it would benefit police themselves if they would exercise the same sort of responsibility when members of their group do things that will reflect badly on them and hinder their ability to accomplish their “mission,” instead of reacting with even more aggression toward those who rightfully point out those transgressions.

The transgressions of individuals reflect badly on a group at an inverse level dictated by the positive actions that a group takes to address those actions. When a group covers up for and enables an individual to continue negative behavior, the actions of those individuals rightfully reflects badly on the entire group. When a group does the right thing, then people understand that no group can keep every individual that has ever been involved with that group from doing something bad. “Bad Apples” have to be removed before they spoil the whole barrel, not used as an excuse that allows the rot to continue.

Cop Block can point to a legitimate and consistent history of holding our bad apples accountable for their adverse actions, while the police have a long and constant tradition of protecting theirs from any sort of repercussions for their actions, regardless of how bad or deadly they might be.

Kelly W. Patterson – admin of Nevada Cop Block and Cop Block Press Passes (as well as a contributing writer on CopBlock.org and primary writer/editor for NVCopBlock.org)