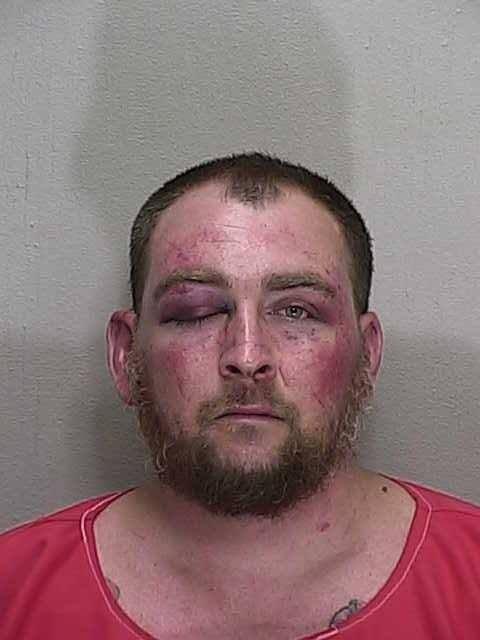 An anonymous reader shared the content below, regarding a case in which a heavily armed SWAT Team was used by the Marion County Sheriff’s Outfit to enforce a minor traffic violation based on the political beliefs of Dustin Heathman, the individual accused of “committing” that victimless crime, via the Cop Block Submissions page. There is a support page on Facebook for Dustin where you can get more information and lend support. On June 1, 2014, Dustin Heathman was setting up his speaker system when he glanced out the window and saw a cop with a shotgun walking through the yard. More cops followed quickly. Snipers in ghillie suits surrounded the house. They were there for a suspended driver’s license. Multiple Supreme Court rulings have determined that driving is a right protected by the Constitution. And even if it WAS a real crime, it was a victimless misdemeanor traffic violation. Following a financial argument, Dustin’s father had decided to call the cops on Dustin and lied to them. He also told them that there was a warrant for Dustin’s arrest for the suspended license. So the Marion County Sheriff’s Office (MCSO) responded by sending in a SWAT team, as if he was holding hostages.

Fearing for his life and knowing he hadn’t actually done anything wrong, Dustin tried again and again to avoid confrontation. Eventually he got on the phone with the SWAT negotiator, who didn’t do her job and failed to negotiate a thing. He explained to her his constitutional rights. He was not threatening to kill cops, and he was not making ‘anti-government statements’ the way MCSO claims he did.

The cops started shooting at him and using tear gas to force him out. He surrendered, was handcuffed, and then severely beaten by several MCSO officers. He suffered a fractured eye socket, a damaged ear, and a concussion.

MCSO decided to charge him with ten counts of attempted murder on law enforcement. They lied to the media about what had happened. According to them, Dustin was making a bunch of anti-government statements and saying he wanted to kill a bunch of cops. This is NOT true. He never said anything like that. The cops claim he shot at them, however NO officers received so much as a scratch. No one was injured, no one was killed. He did not point a gun at any of the cops.

He has paperwork that they wrote in which they admit that the reason they came for him with such force is because of his so-called “anti-government activities.” Dustin has been speaking out against the growing police state and the tyranny here in the USA for a long time now. He has never committed any kind of crime in doing so. He is not anti-government; he’s anti-tyranny. He has never threatened to kill cops or anyone else for that matter.

Marion County’s version of events is full of lies, contradictions, and half-truths. Their version of events raises too many questions which cannot be answered by their account. MCSO is somewhat infamous for using excessive force and for being so corrupt.

Dustin is not the violent thug that the cops are trying to make him out to be. He’s a very caring person. He’s an animal rights activist and pit bull advocate. He stands for the Constitution. He’s got the Betsy Ross flag tattooed on his chest and the Founding Fathers tattooed on his shoulder. He had a framed copy of the Declaration of Independence. He loves his country. Yet he is now a political prisoner because he dared to speak out against tyranny.

Dustin has done nothing wrong. He never tried to kill anyone. He is an innocent man facing ten life sentences for standing up for his rights and not hurting anyone in doing so.