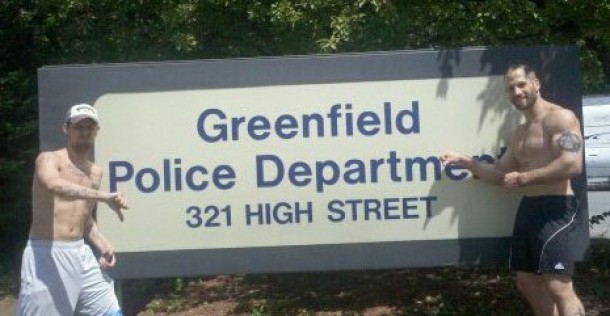 In July of 2010 I was arrested – along with Pete – by Todd M Dodge, an employee of the Greenfield, MA police department, and charged with trespassing, disorderly conduct and wiretapping. Below is a four minute video that was put together to highlight the case, it should help bring you up to speed on this blog post:

That video was released just before our trial in July of 2011. Below are two parts of our trial footage:

After we were found not guilty to the I decided to pursue a lawsuit against the City of Greenfield and the Police department, particularly Todd M. Dodge. Since I felt, and still believe, most of his actions toward Pete and I were due to our first interaction where Pete and I basically shut him down in under thirty seconds, see below:

It took nearly three years but I finally decided to accept a settlement from the township and police department. Unfortunately the agreement states that I can only state the case was settled, I cannot announce the terms of such settlement. Just know that this chapter of my life is over.

Was justice served? No, of course not, the settlement doesn’t make what happened to me right or even whole for that matter. Those involved in this from the other end barely faced any repercussion from their actions either. Probably just the headache Pete and I gave them for a year at the most. Yet, we live in a world that provides this kind of justice, so go ahead a comment your thoughts on my settlement. I fully acknowledge the world we live in and wish more than anything we could have a system that provides actual justice, but until than, slave world justice it is.

META POST OF ALL VIDEOS, UPDATES AND BLOGS REGARDING GREENFIELD, MA