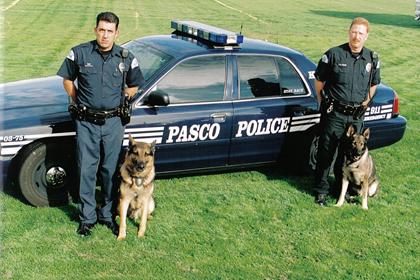 The video below was submitted to CopBlock.org through the submissions tab. The video appears to show Pasco police shooting a man who was holding a rock. According to the Yakima Herald Republic:

More than a dozen witnesses watched as Pasco police shot and killed a man Tuesday night near a crowded intersection by Fiesta Foods, a popular grocery store.

A cellphone video of the shooting posted to YouTube showed officers shooting the man outside Vinny’s Bakery and Cafe on Lewis Street as he ran away.

Police did not release the man’s identity Tuesday night. It’s unclear in the video if he was armed and police say they are unsure if a weapon was found at the scene.

(Video from a witness to the shooting was posted to Youtube. The clip, which contains graphic content, is available at the bottom of this article.)

Witnesses say the man picked up a rock and appeared like he wanted to fight officers who responded to a disturbance call about 5 p.m. near Fiesta Foods. One witness told the Herald the man threw a large rock at a passing vehicle shortly before police arrived.

Police tried to shock him with a Taser, but it had little effect on him, said Ben Patrick, who was just yards away in the grocery store parking lot with his family when the shooting happened.

“The guy was trying to pull the Taser (prongs) out of his arm,” he said.

The man was carrying a rock and may have tried to throw it at police, witnesses said. The grainy video shows him coming at officers on 10th Avenue, then turning and running as police fired several shots. He crossed the intersection onto Lewis Street while three officers chased him.

The man ran about a half block down Lewis Street before officers fired several more shots. The exact moment when he is shot is blocked by a vehicle in the video, so it’s unclear if he turned around to face officers. They appeared to handcuff him as he lay on the pavement after he was shot.

Tuesday’s incident was the fourth fatal shooting involving a Tri-City police officer in Pasco in the last six months. Officers have been cleared of any wrongdoing in all three of the previous cases.

Patrick told the Herald police fired at the man as his back was turned and it looked like he was facing away from officers when he was killed.

The police wont say if the person killed had any weapons other than a single rock. If the persons only weapon was a rock, how serious of a threat to officers is that? I mean, he only had one rock, was killing him really necessary? Seems witnesses echo the sentiment, that it’s not a valid threat. This seems to be another example of how police merely escalate interactions with violence instead of ending situations via more peaceful means.

Video of shooting below: