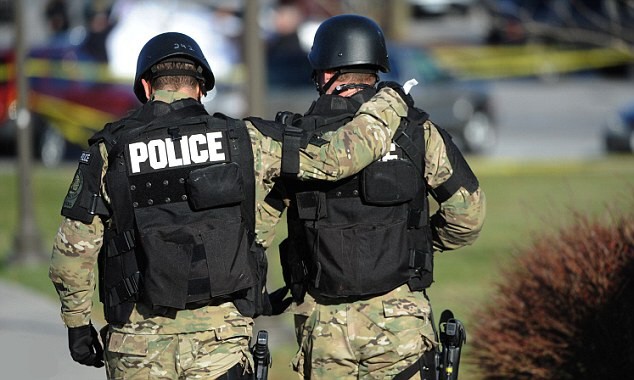 PSOSGT, a frequent commenter on CopBlock.org, submitted the following as a guest post. He didn’t think it would be published but after reading it I thought it would make a good blog, including my responses to his statements. PSOSGT’s statements are block quoted.

I realize this isn’t going to be posted, but I think these two stories shed SOME light as to why police don’t like people behind them, filming or just watching, while dealing someone else. Yes, we use the tired saying of “officer safety” but these are two examples that happened over 2 days that show why police get “jumpy” at times when people walk up to traffic stops, or any other investigation.

Cops can’t read minds. We don’t know if your going to talk, film, watch, or pull out a gun.

Sergeant David Enzbrenner was shot and killed in an unprovoked attack while assisting a code enforcement officer serve a nuisance order at a home near the intersection of 12th. and Division Streets shortly after 4:00 pm.

A person unrelated to the order suddenly approached and opened fire without warning, killing Sergeant Enzbrenner. The man then committed suicide. It is believed the man held a grudge against law enforcement officers because his father was serving a life sentence without parole in Louisiana.

Ah, it says that, “a person unrelated to the order suddenly approached and opened fire.” There was no preventing this, nor is there any one reason as to why this happened, other than some guy wanted to kill this guy. There was no camera involved in this case and a number of things can be distractions, so where do you draw the line? Or why even draw a line? If filming officers makes their job more dangerous then I suggest they stop forcing people to pay their salaries.

Officer Deriek Crouse was shot and killed while making a traffic stop in the parking lot of the university’s Cassell Coliseum, near McComas Hall, at approximately 12:15 pm.

At some point during the stop, a suspect unrelated to the traffic stop approached his unmarked car and shot him once in the head as he sat in his vehicle. The suspect fled on foot to a nearby location on campus and changed clothes. He was located in the university’s I-Lot approximately 45 minutes after the shooting and committed suicide as a Montgomery County deputy attempted to contact him

Again, this seems to be a predetermined event. Maybe this officer was corrupt? Maybe he was in the wrong place at the wrong time? Maybe, just maybe, this was a good officer who paid the ultimate price for another’s mistake. Officers who die in the line of duty are honored – parade and all – yet when officers kill someone the deceased are criminalized.

Neither of these examples prove PSOSGT’s point, that officer need to be wary of people filming. For one, both officers were preoccupied with enforcing some sort of victimless crime – code enforcement and traffic stop – which could be part of the reason for such hate towards LEO’s. Second,  if someone had been filming they would have caught these murders on video and could have helped hold those responsible. In case it wasn’t justified, like when cops kill innocent people for being at the wrong place at the wrong time.

PSOSGT goes on to say,

On a personal level, and I’ve said it before. Showing only 1 side to the story, without context isn’t going to win you any favors, or bonus points with people if you truly want to change how police conduct business.

Everyone has a bias, no matter what they say. It’s natural. If there is a bias, and we show one side of policing, I think it’s obvious by the name – CopBlock.org. Atleast we don’t tell you this is the “No Spin Zone” while we jam our beliefs down your throat. Also, I encourage anyone to look at the other side of the coin, watch COPS, visit PoliceOne.com and research as much as you can about police.

How many LEO’s have ever thought about starting their own police service, without the government’s permission, that actually protects people? Are any officers out there sick of the politics involved with their jobs? Forced to do things they don’t like, told what laws/actions to arrest people for? Wouldn’t it be great to sit at home – or do routine visits to costumers – and wait for someone who actually needs help to call you? Have you ever thought of working for yourself, rather than the man?

I agree with anyone who looks at a call, video, report, or cops actions and says, “that’s fucked up” or disagree with what happened. It’s common. But the vast majority of people out there have NO IDEA what or why an officer acted or reacted in any given situation. I think it’s just as important to see what is put INTO law enforcement, that the result of an officer doing his/her job.

I think alot of us do see what’s put into law enforcement… law, which is simply words on paper that I may or may not agree with and enforce, which means if I don’t like it I’ll be punished. So, enforcement is what happens to those who don’t agree with the laws. And an officer’s job isn’t about what they believe but enforcing laws, even ones they know are bad/unconstitutional.

What do you think? Do cameras distract officers? Were these good examples to back that claim? Are people who aren’t police officers less creditable when discussing police issues? Would you hire a private company to provide you protection services if offered (instead of paying taxes to your local department)?