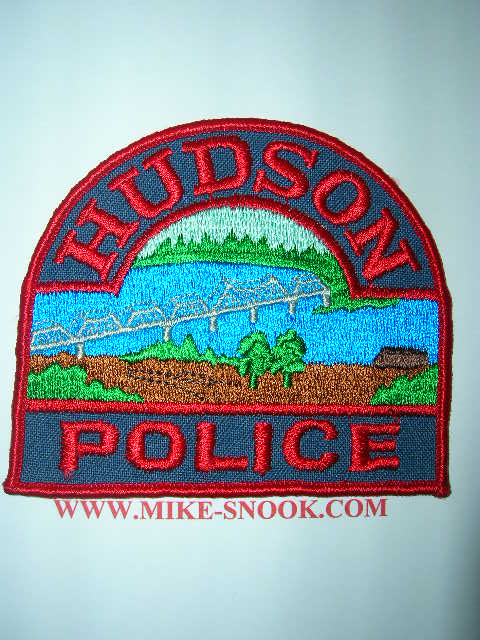 The story below was written and submitted by AJ Meulemans. You can share your stories, ideas, videos and/or suggestions about police via copBlock.org’s submission tab as well, simply click here to get started.

On the evening of 04FEB15, shortly after 2100 local time, I was travelling by means of private motor conveyance (PMC) on Carmichael Rd/ Cty Rd F on the southern end of Hudson WI. I came upon the scene of a traffic stop and decided to pull over and exercise my rights to free speech, free press and peaceable assembly by recording the interaction as a neutral, third party observer.

I positioned my PMC several automobile lengths ahead of the vehicle that had been stopped. Before I was able to exit my PMC, the ostensible officer Kate Potter, ID 4144, approached my PMC and knocked on the driver door window, shining a flashlight in my face, asking if I needed assistance or had car trouble. [NOTE – I say ostensible officer because I have not yet been furnished proof of oath and bond of any actors involved in this event] I told ostensible officer Potter “No thank you, I am here to CopBlock, please go away.” She persisted at my window, so I rolled it down approx. an inch and reiterated that I was there to observe and told her to go away. She seemed to comply and began moving back toward the traffic stop.

I secured a piece of printer paper to use for taking notes and a small pamphlet which was thicker to use as a sturdy backing. I made note of the date, time, location and a few notes about this interaction at my PMC window on said printer paper.
I stowed my pen in my pocket and exited my PMC, leaving it running and the door open slightly for fear of it somehow locking itself (it is a 99 and has electrical issues where it cycles the locks occasionally without any user input). I made my way around my PMC up onto the grass near the curb, a few feet off the roadway.

The ostensible officer Potter approached me again and told me I needed to leave because I was obstructing. This happened so quickly that I did not have time to secure my cell phone to use it to record and did not want to reach into my pocket to get it for fear of being shot. The ostensible officer was clearly agitated and seemed to dislike the idea that I was there to observe her in the conduct of her duties. I told her that I was there as a neutral third party observer and was there for her protection as much as anyone else’s. I told her that I posed no threat to her and that I had a Constitutional right to observe and create an impartial record of her in the conduct of her duties. She continued to tell me I was obstructing and that I had to leave. I told her I did not and that I was going to stay, emphasizing to her that she needed to focus on the traffic stop, go back to doing her job so I could do mine (of observing her). I thanked her for the courtesy of asking if I had car trouble and told her to go about her business.This is when ostensible officer Potter placed her hand on her tazer device during this exchange and I AGAIN reiterated to her that I posed no physical danger to her, that I was holding a piece of paper and that she needed to focus on the traffic stop. She called for backup and claimed that she would go back to the traffic stop when this backup arrived.

The backup unit arrived and immediately became confrontational. This second unit pulled up so rapidly that he almost hit ostensible officer Potter, who had been standing just off the curb. The second officer, whom I have yet to identify, climbed out of his cruiser and stormed up to me, getting within inches of my face. I asked him to back away from me, to which he did not comply, so I had to back away a few steps to create some separation and feel at least a little safer. He told me I had to leave because I was obstructing, I told him I didn’t have to leave and that I was not obstructing because that implies a physical obstruction and that being multiple automobile lengths away was not obstructing. I tried to move back toward my PMC but the backup officer blocked my path. I asked him for his name and badge number, which he provided. I then asked him if I could reach into my pocket for a pen to record that information and he denied me that. I then asked if I could borrow his pen and He told me I was under arrest and called for more back up. I told him I was not under arrest and I offered to leave (which was the original command ostensible officer Potter had given). Ostensible officer Potter had not gone back to the traffic stop at this point.

Additional units arrived rapidly forming a line of between 6-8 people and one dog. Ostensible officer Dan Jents, ID4150, withdrew his tazer device and pointed it at me. They were shouting orders at me to the effect of get on the ground, get on your knees, etc. I asked them why they were doing this, why they had escalated this, why they had a dog (who was chomping at the bit so hard that its front legs were not even in contact with the ground). I continued to reiterate that I posed no threat to them and that they didn’t need [to use] violence. At one point I even looked over the tops of their heads and shouted to the person who had been pulled over for their help. I was backing away, taking small and edging steps as the tazer was deployed. It struck me in the left thigh and lower left torso. I stayed on my feet as long as I could. I yelled “You know this is wrong” at one ostensible officer who had his head down and hand over his mouth in an attempt to avoid looking at the scene of the assault on me.

My legs were eventually immobilized to the point where I could no longer stand. I collapsed to the ground at the curb, landing on the roadway in front of my PMC. Several ostensible officers knelt on me (one on each arm near the elbow and at least one on my back/legs) while ostensible officer Jents continued to hit me with the tazer device at least three times. My glasses were knocked off and bent. The sleeve of my jacket ripped. My forehead was cut and I developed a rash at the site of the tazer wound on my torso. The tazer wound on my leg bled through my boxers, leaving several spots of blood. I was cuffed and had my pockets pilfered, with no chain of custody form or itemized record of my belongings being taken down. My PMC was stolen by a local towing company, a plastic sleeve that was holding several things inside my wallet was destroyed, the pamphlet which was used as a backing for my notes was stolen and the page, on which I was taking notes, mysteriously vanished at the scene.

The rest of the evening was relatively mundane. I was taken to a hospital and treated then I was taken to a holding cell for a relatively short amount of time, treated with what I would describe as a benign, disengaged false politeness. I was threatened with a forced night in jail (violation of due process) if I did not provide an address under the auspice that “I [officer Jents] cannot release you to ‘homeless’” and was threatened with a prolonged detention (again, violation of due process) if I did not answer questions about my employment. I posted bond and had over $50 US stolen from me in a “non-refundable credit card fee” and was released to be on my own, in Hudson WI, approx. 15 miles away from where my car was, at around 0030 hours local time on a night that got down below zero degrees Fahrenheit with windchill temperatures approaching -20 degrees. In spite of being kidnapped by Hudson PD, they refused to give me a ride to where my PMC had been stolen to. Luckily, I was able to find shelter and a means of conveyance to where my PMC was and was no longer in personal danger.