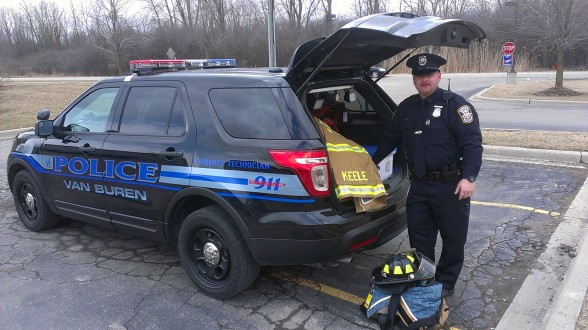 A reader, named Carter Sherman, shared the content below, regarding the service several employees of the Van Buren Township (MI) Police Dept. provided to him and the wasteful habits of those individuals, via the Cop Block Submissions page. Individuals Involved: Sergeant Papin and Lieutenant Bazzy
Outfit Involved: Van Buren Township (MI) Police Department
Phone: (734) 699-8930
Area Cop Block Affiliate: There are several Cop Block groups within Michigan, including Jackson Cop Block. In addition, if you live outside Michigan you can find the appropriate affiliate in your area by consulting the Cop Block Groups page or, if necessary, Start a Cop Block Group yourself.

So I should first start off by saying that I have had trouble with police harassment in the past. I watch most every Cop Block video that is posted and read a lot of the articles. I am fully aware of the corruption that is taking over the nation. I was wondering how my little town of Belleville, Michigan, with less than 4000 residents, is affected.

I had just finished a workout at a local gym on a Saturday when I saw three Van Buren police cruisers in the parking lot in front of a Subway restaurant. I noted that one of the squad cars, which happened to be a supervisor unit, was left running while the other two vehicles were turned off. Since I had nothing to do that day, I decided to wait and see how long this car will be left running for no reason. I parked my Honda Civic behind the supervisor car and waited 30 minutes for the officers to come out – I had a dashcam running to make sure everything was on film.

When the officer came out, I calmly exited my vehicle and politely asked “excuse me? Can I ask you a question?” Sergeant Papin’s response was “yeah sure.”

“Is there a reason that your squad car needs to be running for a half hour while you’re at lunch?”
“Short answer: laziness (laughs)”
“Oh. Okay.”
“But no, seriously, we have a lot of equipment that takes about 15 minutes to fire up once the car is turned on, so we just leave our cars running.”
“I see. Well, those other two squad cars aren’t running right now.”
“I’m only responsible for my car.”
“Thank you officer. Have a nice day.”

I then returned to my car and waited not even 2 minutes before the officer came to my car and asked “Do you have business here, or are you just here to harass people?”
I replied “I’m sorry. I don’t answer questions.”
He said “How about you get out of here?”
I said “I don’t answer questions” again.
He demanded in frustration “You know what? License, registration and proof of insurance.”
I said “Am I free to go or am I being detained?”

He then went to the back of my car and read my license plate to his radio and returned to his car. I rolled my window down and asked for his name and badge number. He ignored me and took off in his car.

At this time, I was unsure if I could leave or not. Sergeant Papin was driving in wide circles around the parking lot and my car. I exited my car a few times to flag him down and ask for his name and badge number. He ignored me every time. Then I noticed that he was on the opposite side of the parking lot with another officer. I walked over there to ask if there was a problem. Sergeant Papin yelled to me “do not approach the squad car!” I was in shorts and a t-shirt, so it was pretty obvious I was not armed. However, I returned to my car.

The two officers drove slowly towards my car at different angles. Eventually, Lieutenant Bazzy walked to my window and said “what’s up?!”
I responded “I don’t answer questions.”
Lt. Bazzy: License, registration, proof of insurance.
Me: Am I free to go or am I being detained?
Lt. Bazzy: You’re being detained.
Me: What crime do you suspect me of committing?
Lt. Bazzy: False plates. We ran your plates and they came back to a Pontiac. This is a Honda.
Me: I’ve had this car for 9 years. You have made a mistake.

I rolled up my windows and waited for them to realize their mistake. During these few minutes, they were discussing loudly how I locked my doors, roll up my windows, only crack the window to talk with them, and how I look really nervous. Lieutenant Bazzy then checks my VIN number and reports it back to the station.
Finally, I hear Honda Civic.

Lieutenant Bazzy then re-approaches my window and tells me how it is none of my business why Sergeant Papin’s car is running and a series of other things implying how I am wrong. I said numerous times, “am I free to go or am I being detained?” Finally, once he said I was free to go, I left, and he followed me out of the parking lot.

When I got home, I told my dad what happened. About 20 minutes later, Lieutenant Bazzy calls my dad’s phone and asks if he or his officers are in danger because of me. They discussed a bit more and Lieutenant Bazzy requested an in person meeting with my Dad. I am 22 years old, might I add. My dad and I drive to the station and they requested numerous times to meet with my dad alone, and we both declined until the four of us had the meeting in the hallway.

It was a 15 minute meeting, and I did audio record, but it’s basically them saying how I am a threat to them and they had every right to “yank me out of the car” and that it would hold in court.
Unfortunately, my dashcam’s sim card malfunctioned and I don’t have the video.
I sent a FOIA request to purchase Sergeant Papin’s and Lieutenant Bazzy’s dashcam video. I was able to receive Lt. Bazzy’s footage*, but Sgt. Papin’s footage “malfunctioned” as well. Oh, the irony.

The moral of the story: guilty until proven innocent.

NOTE: No permission is needed to share this post, or any content housed at CopBlock.org.
Ideas have consequences – the more good ideas are shared the better we all are.
Help fuel our efforts – donate Bitcoin: 1D6hdGKcFfzciJaMSLU6X1Tq69fcCsEh65