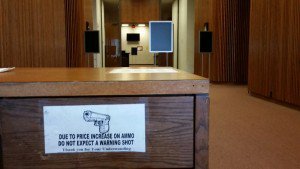 It’s disturbing to me that this is the attitude of the people that we have charged with our protection. Hopefully, the people of Cleveland would expect better of them. I would think the Cleveland Police would be trying everything they could to fix the image they have created for themselves over the last 10 years.

Why are police in the U.S. so aggressive all the time, even with their “jokes?” In other countries, the police are only defensive. Most other countries don’t even let the cops carry guns. They have em, for when the shit hits the fan, but they are not carrying around assault rifles, like they do here.

Now, I am not saying that our police shouldn’t be armed. This is America, after all, and we all enjoy the right to bear arms. I wouldn’t want to take it away from cops anymore than I’d want it to be taken away from us. But this sign? In a place of the supposed “Hallowed Halls of Justice?” I’m talking about holding our police to a higher standard! Why shouldn’t we expect them to be held to a higher standard? If this is how they see us, what chance do they ever have of rebuilding trust in the community? I mean that’s what they all say they want to do to our faces, right? They tell us how they want to rebuild that trust, and then you catch em doing dumb shit like this!

I was cited in Parma for having a sign at a checkpoint (see video below) telling people something they have every right to do anyway, and this is acceptable? Excuse me a moment. I have to laugh out loud! It’s no wonder no one trusts police. It’s no wonder we feel like we live in a police state. If the Cleveland police want to rebuild anything within this community, they better start by cleaning house in their own headquarters. I shouldn’t have to fear for my life in the courthouse from them. I already made it through the police encounter in the first place and that was supposed to be the hard part!

If you live outside Ohio, you can find the appropriate affiliate in your area by consulting the Cop Block Groups page or by Starting a Local Group.