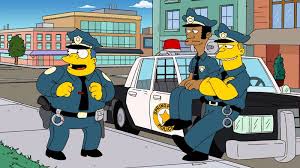 What kind of title is, ‘what cops say without actually saying anything?‘ How can someone say something without saying anything at all? I assure you that I haven’t (fully) lost my mind. What I’m talking about here is the, ‘a picture is worth a thousand words’ analogy. What is, or isn’t, being implied – or said – by the mere presence of any law enforcement officer is important to understand.

It’s true, most cops have the same shit, to be blunt about it. From the standard issued slacks, shirts and shoes the attire of a police officer is as common as that of an inmate. Their cars are all similar – for the most part; with their cages, computers, lights and additional weapons that are mass produced and over priced. The police officer’s utility belt once consisted of just a pistol and additional bullets, but now holds enough toys that Batman himself would be jealous. Throw in the additions of the nonlethal – ‘deadly as hell’ – tazer, the – ‘break your leg’ – extendable baton, double locking handcuffs, pepper spray and what do you have? Police who are ready to protect and serve (the shit out of) you.

So, why is it that the majority of police officers all look the same? Is this an effective deterrent to crime? Is it more economical for the government to buy in bulk? Or is this because they have something to say, without saying anything at all? You Say it Best When You Say Nothing at All

What can be more effective for a gang than having people understand your purpose, ability and power without having to consistently enact it? This is exactly why gangs choose colors and signs to represent themselves. It’s why most people reading this blog understand that red = bloods and blue = crips. The gang realizes that, by having a certain image, they’re less likely to face confrontations and when they do  have to enact violence, they do so under controlled settings.

Combining the recognition of a gang by symbols, colors and clothing, with that of the violence they use, creates the fear factor that people relate such associations to. This is why when people encounter a gang member – whether they are the most, or least, violent gang member – they know without any interaction that an encounter with such a person means other people dressed like them (or that person them self) are capable of using violence and are commonly carrying weapons. People know that engaging such people could lead to personal harm – even death.

[VIDEO: PSA I did comparing street gangs to the organized gang of police.]

The police are no different, in fact, they put this on steroids, and rightfully so – considering they are the world’s largest gang (if you haven’t seen this documentary by Boiling Frogs, you should). They’ve chosen to wear similar clothing, share the same weaponry and par take in organized actions. The reason for this is simple, they want you to understand who has the control and who has the power. In the same fashion as the Bloods and the Crips, the ‘thin blue line’ gang wants you to know you’re on their turf and you’ll follow their rules. You’ll never find all 600,000+ of these gang members in one spot, but anywhere you go there are a handful of them; with their matching costumes, belts and cars, grouped in little bundles of 3 – 5 officers, just humming around sending out this un-spoken message.

They commit – most of – their violent acts with superior man and firepower, commonly at night, or when their subjects are least expecting it. No less than eight cops will raid your home, while the average home only has 4 – 5 occupants. And, if faced with any sign of resistance, a flood of similarly dressed jack boot thugs will come to provide assistance, not to you, but to their brother(s). Make no mistake about it. The mere presence of a police officer is a clear statement. They are saying, “you know what we’re capable of, you know what we do, and you know who we are.” To think anything else is a major miscalculation because any interaction with ‘the thin blue line’ gang can result in your death. If not by the actual member you’re encountering than by another member of the gang that have proven capable of such actions.

If there are cops out there who disagree

with the unspoken message the uniformity of the police represents, I suggest you take a moment to compare yourself to any other gang – or the mafia for that matter. If you don’t believe that you are, in fact, part of the world’s largest gang, then ask anyone how they feel when they see a police officer in their rearview mirror. You’ll find that they don’t say “safe” or “protected.” Nope, they normally say “nervous” or “scared.” That’s because of what you’re saying without saying anything at all. That’s because either you, or many of your brothers (and those before you), have made the clothing you wear, the badge on your chest, the cars you drive and the weapons you carry mean something. The meaning is not one of peace, protection or caring; it’s of fear, control and oppression.

This is why I refer to police (at times) as gang members, their uniforms as costumes and their actions as theft (raiding homes), extortion (most traffic tickets) and revenue generation. If it looks like a duck and quacks like a duck, then it’s a duck.