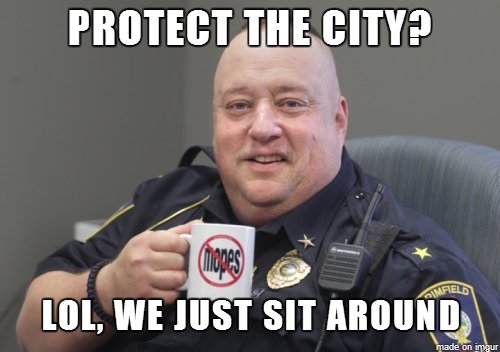 The following post was submitted via CopBlock.org’s submission tab.

Long time follower, love your work. This is not so much a police brutality case, more so an example of how useless the police are when the people actually need justice served.

I was at the LA Fitness in Garden City, NY. I had my wallet stolen out of the locker and the thief had already spent $350 by the time I canceled my cards. I called the police, the first officer I spoke to basically told me he couldn’t file a report because it was another precinct’s jurisdiction and that they will never catch the guy. I suggested getting security camera footage to ID the suspect. The cop said “but then what, just having a picture wont do anything” and he even had the gall to say “the credit companies are the real victims here.” I shook his hand and showed him the door, then I filed an official report with the third precinct.

Again I was told that the police won’t even try to find this guy. So, I take it upon myself to investigate. I went to the Auntie Anne’s location (where the card was used) and requested to view the footage myself. I knew the time of the transaction and looked at the corresponding footage. I then had five minutes of video of this POS using my debit card. I took a few pictures with my phone and proceeded to the gym. I showed some of the employees there this guys picture. One of the employees remembered him clearly and said the suspect signed up for a 3 day guest pass, which is how he gained access to the locker rooms. The employee then showed me the sign up sheet with the suspect’s information from his drivers license. Now I have the suspects name, address and phone number. I gave this information to the detective, who is just amazed with my work. The suspect has 23, count em, 23 previous arrests for similar crimes, but needless to say, he is still a free man.

The detective prepares me for the harsh truth that they may not be able to arrest him even with the proof I’ve gathered. On Sunday the 22nd, I gave the detective this info, the detective tells me he won’t be back to work til Friday the 27th. Apparently, detectives work 3 days and then have a 4 day weekend every week (amazing isn’t it?). Now, I’m patiently waiting for the law to do what any of us could have done by now, but I’m forced to sit back and hope that this man is arrested. It is such a hopeless feeling. I myself have been harassed by police and arrested for victimless crimes, how quick they have been to arrest me for a folding knife Yet, how long will it take them to arrest a career criminal with photo evidence of him committing crime?!? It simply baffles me.

I will keep you posted as the story develops. I have pictures of the suspect and his personal information. Should the investigation lead nowhere (as I anticipate), I will consider publicly shaming this person to get justice. This only adds to my theory that police are not meant to protect or serve us, only to fine and imprison us, while generating revenue for the state. The 94% drop in arrests by NYPD proves this point. 94% of those arrests are just to generate money. As you have seen, there wasn’t a tremendous spike in crime, nor was the city unlivable during that time. We all know this, but if my story can help change the minds of people who still think we need police to protect us I’m more than glad to help.

Thanks for sharing this story Stephen, sadly, I too have witnessed many people who are actually victims of a crime who get little, to no help from the police. I think your assessment is correct, that for far too long police have been nothing more than the State’s way to control people. I don’t even think the police are revenue generators, because the money doesn’t really mean anything. It’s only paper and they print it all day long, this is about control.

– CopBlock Groups Page: Connect with others in your area or start a group/chapter.
– Know Your Rights Page: Get tips, tactics and knowledge to help yourself during a police interaction.
– CopBlock Network: Support the great folks who make CopBlock.org possible by contributing $1/month to our efforts.