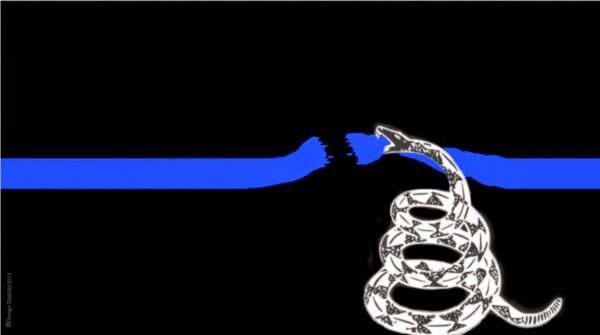 The following post was written by Joseph J. Julicher, a retired cop (whom I’ve invited to blog here at CopBlock.org) and was shared via the submission tab at Copblock.org. Christopher Dorner, Michael Brown, and Eric Garner are products of a broken system. A cancer exists within law enforcement; the corporate culture of police work in America is laced with prejudice and predisposition. However, those entrenched in positions of authority are products of that system. They are either unwilling to admit it or are intellectually dishonest. They would rather destroy a righteous man and his family than have to look in the mirror. They are cowards! When someone finally stands up for the voiceless, they close ranks, and protect that thin, blue line. When they’re motivated by keeping themselves out of prison, they can be downright sinister.

“Patrol Five to radio”; Who would have known? Words that I had heard uttered over our radio thousands of times before, but this time was destined to be different. Who would have known that, ten years in the FUTURE these words of a coward would eventually cost me everything; my career, my family, my house, my car, my investments, my ENTIRE LIFE.

“Patrol Five to radio, I’ve got a guy up milling around the Dodge Dealer lot; he’s up to something.” I listened to these words with one ear. For starters, the guy on the radio was clear on the other side of town, six miles away. Secondly, he was a glory-hound, narcissist who was constantly attempting to stir things up and make something out of nothing. Generally his “discoveries” were efforts in futility, serving only to interrupt the peaceful silence of the midnight shift.

“Radio, he’s taking off on me, in a white Dodge Neon, north on the Boulevard.”

“Good”, I thought to myself, “this thing’s heading north; hell and gone away from me!” I couldn’t have been more wrong.

“Aw, shit, coming my way”, I thought, so I posted myself near the entrance to the 190 South, just in case this thing found me. Well, as my lack of luck tends to bear out, it came my way, in more ways than one. The chase proceeds to intersect me, and I join the fray on the 190 South by the Sheridan Drive entrance. I’m soon going 110 MPH and not keeping up with the chase. I vividly remember looking over at the river and being reminded that our current fleet of police vehicles were experiencing tie-rod failures. “At this speed”, I thought, “If something breaks, I’m getting wet!”

Now, at this point, NOTHING has been established as to why we’re chasing this guy or what (if anything) he’d done. All things considered, I ease off of the accelerator and follow at a safer speed. The chase eventually winds it’s way onto the 33 East, and Patrol Five reports that the suspect has crashed out while attempting to utilize the Grant Street exit. As I arrive at the scene of the crash, I see the smoking Neon stuck in the fence; no driver, no patrol five or his vehicle. We try and raise him on the radio with no luck. There are a few genuinely tense moments while we can’t find our colleague.

Other following patrols arrive and we begin to scour the Buffalo State College campus; directly across from the crash sight. I find patrol five’s vehicle, empty, and hear some yelling and screaming. Officer Tim Waring and I both exit our vehicles and run towards the direction of the commotion. As we get closer, the voice yelling is the one of our co-worker, officer Joe Flanagan, and he is clearly distressed and irate. Rounding the corner to an alcove, my eyes were met with a sight that I’d never even considered in my life; the suspect lay prone on the ground, handcuffs behind his back, officer Flanagan straddling his back, screaming racial epithets

I locked eyes with Waring, in utter disbelief of the scene that we had just come upon; Flanagan had lost his ever-loving mind. His tirade was being executed with his gun in the suspect’s mouth! HO-LY-FUCK! This shit just got real! Waring and I run to Flanagan’s side. The look in his eyes is chilling; vacant and vengeful. With the wrong move, this incident is going to end the life of a suspect and the careers of three cops.

Waring bends down beside Flanagan, “Joe, it’s OK, Joe, let’s just back it down a little bit.” Flanagan looks at us like he doesn’t know us. I only remember thinking “please don’t go off, please don’t go off, I don’t want to hear any ‘bang’, oh, please, no!”

Waring somehow breaks through the hollow stare to make marginal contact with Flanagan, puts his own hand on the back of Flanagan’s, and guides the gun out of the kid’s mouth. I snap this kid up by the handcuffs and collar, and literally carry him for about thirty feet that way, just wanting to get him out of Flanagan’s proximity. By the time I put him up against my patrol car, this kid is absolutely irate. He’s screaming and kicking and swearing and raising all kinds of a fuss!

He repeated the phrase “I’ma call me Mister Johnnie Cochran, and he gonna’ sue yo’ ass” at least thirty times. I tried to take control of him, settle him down, telling him to just shut up a minute. Finally (and now, regrettably), out of sheer frustration I replied, “So what, just some nigger in an expensive suit”. That stunned him enough to break his mantra, and I was able to finally toss him in the back of my patrol car. At this point, backup arrived in the form of Buffalo State Campus Police. Standing up and closing the door, I turned to lock eyes with the first Campus officer on the scene, a petite black female. The look in her eyes confirmed that she had heard what I had just said.

Now I became concerned. Not that back then I had thought that there was anything wrong with what I had just said, but merely that I had been caught! Not only caught, but caught by the worst kind of witness, a black female! I was NEVER going to hear the end of this. My focus shifted from the atrocity that I had just witnessed to just how much trouble that I was in. I think I tried to offer some weak-ass apology for my commentary, which she knew wasn’t sincere. So, I went back to the task at hand: the kid in the back of my car who was still freaking out. I sat in my driver’s seat and listened to him rant.

“Man, that was fucked up!” he kept screaming. I replied, “Yep, that was pretty fucked up, that should have never happened, and if it were me, I’d be really fucking pissed off too.”

The kid calmed down, immediately. It was almost as if somebody had finally heard him in life, let alone some cracker-ass cop (his words, not mine, but I get it). Now, our suspect, Telly Heath, was no saint by any stretch of the imagination, racking up what I believe were something like twenty felony arrests during his twenty years on earth. While I had him in the back of my vehicle, we had a civil conversation. Unfortunately, what failed to register with me at the time is even if this kid was a piece of shit felon who broke the law for a living, he was entitled to civil treatment.

After the scene was secured, I met with a group of officers who were at the vehicle’s crash scene. Waring had already apprised them of the situation, and we all sat around discussing the events. NONE of the officers were surprised at Flanagan’s actions; we all knew that he was totally and completely capable of losing his ever-loving mind. Upon further discussions with Waring, I learned that Flanagan’s rage stemmed from the foot chase that he had become involved in with Heath. Heath had apparently run himself into a corner in the alcove and decided to hide in a garbage container. When Flanagan had come to find his location, Heath popped up out of the container, striking Flanagan with the lid, directly on his face. Flanagan did sustain a bloody nose and cut chin, something I’d hardly believe justified sticking his gun in Heath’s mouth. In short, Flanagan had gotten the shit scared out of him and then threw a temper-tantrum!

After Flanagan had received medical attention, we all reconvened at the station. Flanagan just so happened to be best friends with our platoon Captain, Joe Muranyi. The two had been laughing and high-fiving as Flanagan related the details of the chase and apprehension. In typical cowboy-cop behavior, Muranyi replied something to the effect of “That’s right, nobody messes with the midnight shift.” Really? Not only were these actions not met with admonishment; they were being CELEBRATED! Worse, Flanagan called Waring and myself into a meeting in the identification room. In writing our supplementary reports, he wanted to make sure that we were “all on the same page.” There was a massive inference that Flanagan was asserting pressure upon us, as a senior officer as well as best friend of the boss.

I distinctly remember exclaiming, “Joe, what do you think? I’m going to write ‘Upon turning the corner, I saw the suspect prone on the ground, with officer Flanagan holding a gun in his mouth’?”

Well, there I had gone and done it; I had participated in the age-old tradition known as the thin, blue line! To say that it was the worst decision of my life is a monumental understatement. However, there were underlying circumstances. Certainly, anyone can justify almost any action, and it doesn’t absolve me from my responsibility. At this point, Flanagan was a married father of two, approximately fifteen years into his career, and bucking for a promotion. I wasn’t about to drop a dime on this guy and ruin his career (possibly destroying his marriage and family as well).

But, in the moment, I did say silently to myself “I ain’t gonna write it, but this guy (Heath) is pitching a fit, so I’m certain that SOMEBODY is going to be asking some questions soon, and if asked if I saw a gun in his mouth, I’m not going to lie”. As it was, I had enough drama in my own life to deal with. I had just wrapped up a divorce from my first marriage. I was emotionally drained from that event, and I certainly wasn’t looking to get myself involved in anything inflammatory.

I figured for sure that I’d be receiving a telephone call from the Chief later that afternoon, but none came. I reported for work the next evening; same thing, nothing. My two days off came and went without any inquiry. When I returned to work the following week at midnight, I feared the worst. I would have bet anything that I’d be immediately questioned on the incident. Again; NOTHING! Days of inaction turned into weeks, and the events of that shift started to fade from the front of my mind.

Shortly thereafter, Flanagan received his promotion to Detective. It definitely gave way to the axiom “out of sight, out of mind.” Flanagan did remain the brunt of a joke on the midnight shift. Countless times, the phrase “well, it’s not like I stuck a gun in a guy’s mouth” was tossed around. Eventually, the incident faded from our collective memory, but it did remain midnight shift lore. I would hasten to guess that there wasn’t a single person on the midnight shift who wasn’t aware of the circumstances surrounding the Telly Heath arrest, nor was there even ONE officer who didn’t believe it.