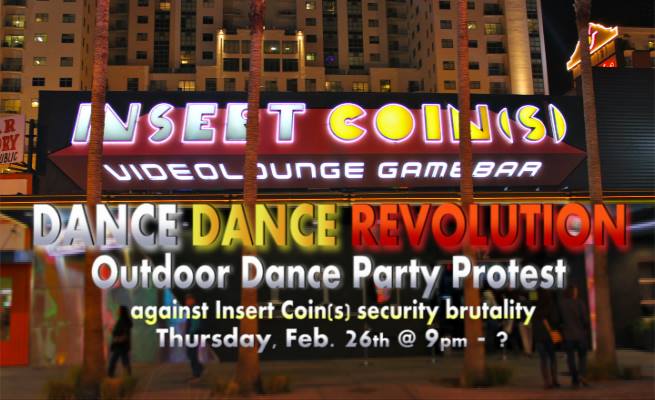 The following press release is being issued by Nevada Cop Block, Southern Nevada Watchdogs, and the Sunset Activist Collective in regards to an event being held in response to a Feb. 12, 2015 incident, in which a man was beaten by security guards employed by Insert Coins on the public sidewalk in front of their business on Fremont Street, in Las Vegas. The egregious nature of that incident, as well as the continued refusal to address the actions

of their security staff by the management of Insert Coins, has and will continue to prompt actions to bring attention to this incident for as long as is necessary.

You can view the original story about Insert Coins’ overly aggressive and violent bouncers and the condoning of that behavior by Insert Coins owner ,Chris Laporte, here and you can watch the video of them beating a man while he is already lying on the ground defenseless here. The Facebook invite page for this event can be found here. Join us and bring your dancing shoes. This is no game, but we know how to have fun with a serious matter. Since word spread about the homeless man getting beat up outside Insert Coin(s) by security (full story and link to video are included below), word of a potential dance protest has also spread and this Thursday, Insert Coin(s) is holding a weekly “futurefunk” show where the flyer states “Dancers Welcome.” Dancing is surely being encouraged. So it is time. Bring your dance moves, no need to be a good dancer or even have any experience. We can dance if we want to, on the public sidewalk outside their property, without having to fear that their bouncers will beat us.

As well as for the general public including the downtown community:
5) To be able to walk, dance, stand or sit on public sidewalks without fear of retribution, retaliation or brutality.

Recently, an unidentified (at this point) man was beaten and then choked while he was already on the ground by security guards working for Insert Coins outside the bar on the public sidewalk. Although it doesn’t show what happened immediately before on the public video, it’s been reported that the security guard involved in the beating was the instigator, based on the surveillance tape.

Regardless of whatever might have happened beforehand, beating and choking someone after they are already on the ground and rendered defenseless by three bouncers is wrong and it is pretty clear that that is what is happening in the video. Further, a fourth bouncer attempted to prevent a witness from recording the assault. later a fifth bouncer, who actually works for the Griffin (across the street), took that witnesses phone away from him, broke it, and assaulted him as well, in order to keep it from being recorded.

Finally, an officer from the LVMPD, who was responding to the call, refused to talk to the witness, view the video he told him he had, or in any way try to discern what had happened. Instead he told that witness to “get the f@!! out of here!” and arrested the person that had been beaten.

Read the article and catch up on updates to the story here:
NVCopBlock.org: Security on Fremont St. Beat Man Then Obstruct, Assault, and Threaten Witness]
Facebook Event Page: https://www.facebook.com/events/359427027575607

You can watch the video of the brutality here :
YouTube: Security from Insert Coins (Fremont Street, Las Vegas) Attack a Man Dancing on the Sidewalk

YouTube Description from attorney Stephen Stubbs:
“On the evening of February 12, 2015, A man (who appeared to be homeless and/or under the influence of drugs/alcohol) was dancing on the sidewalk in front of Insert Coins on Fremont Street.

A security guard attacked the dancing man, beat him up and continued to choke and beat him even after he was lying motionless on the ground. A plain closed security guard tried to obstruct my client from videotaping the incident and even physically pushed him away.

A security guard from the Griffin on Fremont then crossed the street, attacked my client, grabbed his phone and smashed it on the ground (destroying it).