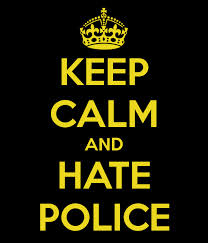 Hate mail from LEO’s is nothing new to me and this isn’t even the best hate mail I’ve ever got. Still, I felt the need to share the thoughts of Kathy Sclafini, retired KPD, since she decided to share hers with me. In a email sent via CopBlock.org’s contact tab:

Do you know what kind of harm you are doing? Your page is full of hate and is influencing young people not to mention people that are already deranged, to hate, disobey, and maybe even kill officers. The police are there to protect your sorry butt. They don’t make the law, they enforce it. I know for a fact that most of these stories are either made up or the whole truth is not told. Your writers could not be everywhere and able to get the full story first hand. There are always some underlying circumstances why some officer’s take the action they do.

Stats show that the percentage of bad cops in the nation is 1% – that’s way less than your elected officials. If you haven’t served you wouldn’t understand. Cops have a split second to react to a threat. I for one will do anything I can to go home at night. If that means I have to shoot someone who is a threat to me, my officer’s or the civilians we are sworn to protect…including your sorry butts…that’s what I will do.

By influencing these people to hate and disobey the authority given to us to do our job, you are just as guilty of the crimes they committed. I don’t know how your site found its way to my page, but I have blocked you. Maybe I should keep it. So I could prove you wrong. People don’t need people like you stirring the pot. There are enough anti police out there willing to do harm to the protectors of life and property.

Are there any bad cops? Yes, but they are weeded out eventually, and like I said the majority of police are fine upstanding men and women – who would take a bullet to protect people like you if need be.

Go spread your hate on the real threat, the criminal element.

(NOTE: the CopBlock email is not monitored daily and is not the best method of contact)

Kathy, who’s first name I got thanks to the Google+ Profile (here’s her FB too) that’s linked to her email, seems to believe that those who contribute here at CopBlock.org (or presumably, under the banner of) are creating some sort of harm? That people here influence others to hate, disobey and even kill. Seriously? I mean sure some people have hate, and I’ve personally disobeyed, but a blog can push people to kill? Now I know how Eminem felt when people accused his lyrics of making their kids do horrible things.

That being said, I’d hate to be the bearer of bad news, but the stories and videos (or even the podcasts, although they do tend to be “editorial” in nature) published at CopBlock.org aren’t made up. In fact, most of them are submitted from people who are fed up with being harassed by police – not haters who merely want to disobey and kill them. These submissions come from all over the country (and at times the world) and are submitted by a variety or people, with a number of issues with the modern day LEO, and that probably the reason nearly 200 CopBlock Groups exist.  So, if there’s hate, or the desire to disobey laws, in people who visit – or submit their stories – here then you and your thin blue line colleagues are the ones who’ve instilled that into them. Not the contributors of this website, nor the near 5,000 stories we’ve published since 2010 (that’s over 3 per day).

Kathy is retired and I’m glad that she’s no longer a cop, maybe things were different when she was a LEO. Maybe she was more the peace officer than the law enforcement officers of today. I don’t know, but I bet she didn’t ride in a Bearcat, lug around a AR-15 or get her chance to taze someone to death. What I do know is that I tried to give her the benefit of the doubt and attempted to end this post with the most recent story of a cop taking a bullet for a ‘citizen.’ Thing is, I couldn’t fine one. I guess cops like to make people believe they’d take a bullet for them, but in reality it doesn’t seem to happen to often. Try it for yourself, use Google and pull up a story of a cop taking a bullet for a person, not another cop.

While you’re waiting for that cop to take that bullet and prove me wrong, another 5 people will probably die at the hands of a cop. This week alone I’ve blogged about 4 killer cops, this week alone (A pregnant woman; John Paul Quintero; Jeremy Lett and Daniel Elroy). How many post can Kathy link you to of cop killers this week? Zero.

Pete created the video below titled, “What Happened to the Peace Officer”, which I feel is fitting for this post: