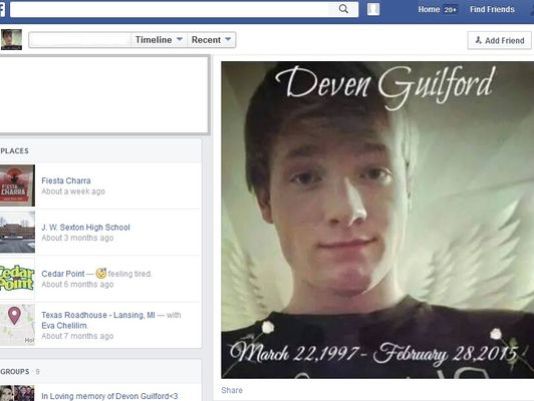 It has been two weeks since Deven Guilford was on his way home from church, where he was playing basketball with his brothers. It was there that Deven was shot and killed by Eaton County Police Officer Johnathon Frost at a traffic stop on Grand Ledge Hwy in  Mulliken, Michigan. The events took place near Cochran road, where Johnathon Frost pulled over the 17 year old. The reason for the traffic stop has yet to be disclosed, but we know the officer called for back up within minutes, saying shots were fired and adding that he was bleeding as well. The number of times Deven was shot by Officer Frost is still unknown, but he was believed to be shot in the head and chest multiple times. Frost was hospitalized with bleeding from his abdomen, an injury that the Eaton County police are calling “significant” but are not willing to explain, as in what caused the injury. Sgt. Jeremy Brewer has not released an update on Officer Frost, as is protocol, for officer-involved shootings and the department has not said if Deven was armed or not.

According to the Detroit Free Press, Deven was the second person in Eaton County killed by police in less than two weeks and the third in the Lansing area, since early December.

There are a lot of inconsistent factors in this incident including why the department wont release the body/dash cam footage, the reason for pulling him over and why he was removed from his car. You can find the original article regarding these events here. I will provide an update when the Eaton County Police Department decides to release more information. Please call the Eaton County Police Department at (517) 543-3512 and demand that they release the footage.

I’ll keep trying to find more information regarding this story, but if you’re in Michigan, consider connecting with one of these CopBlock.org groups: