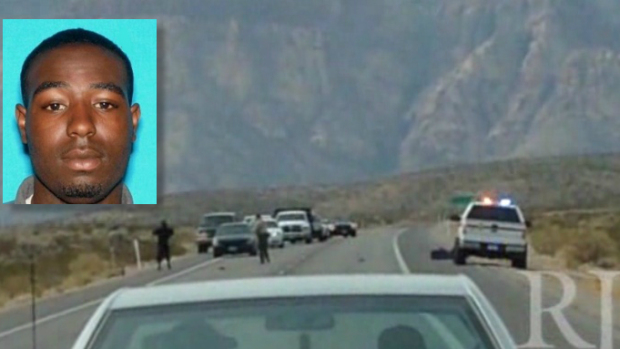 This post was originally published at the Nevada Cop Block website and was shared via the CopBlock.org submission page. At 9:00 AM this morning (March 2, 2015), the Clark County District Attorney’s office will be conducting a “Police Fatality Public Fact Finding Review” for the murder of D’andre Berghardt Jr., who was shot to death by Bureau of Land Management (BLM) agents on February 14, 2014 after he asked passersby near Red Rock Canyon (just outside Las Vegas) for water and some of them called to report that he may need assistance. Those BLM agents, along with a Nevada Highway Patrol Trooper, subsequently showed up and instead of offering assistance (or simply leaving him alone if he refused assistance), began to antagonize, pepper spray, taze, and beat Berghardt.

Not surprisingly, Berghardt attempted to get away from the people that were assaulting him and tried unsuccessfully to get into several nearby cars. Unfortunately, when he did finally find a vehicle that he could get into, it ended up being NHP Trooper Lucas Schwarzrock’s SUV. That prompted the two (unnamed) BLM agents to shoot and kill Berghardt, presumably because they were afraid that he would use the rifle that was locked up (according to the BLM’s own official statement) inside the trooper’s passenger seat.

Although a video (which is embedded below), taken by two people that witnessed the incident from their car while stopped on the road, surfaced within a few days of the shooting, there actually should be another video that would show a much better view of what happened that day. Unlike the LVMPD and other Las Vegas area police, Nevada Highway Patrol vehicles have dash cams. That video has never been released, nor has any explanation ever been offered for it not being released. It’ll be interesting to see if that will be included in the presentation or, at the very least, if some sort of excuse for it’s lack of availability will be given.

In spite of it’s Orwellian name, the “Police Fatality Public Fact Finding Review” is, in reality, designed to do anything but provide facts to the public. It was created after the LVMPD and Police Protective Association were unable to have reforms to the old Coroner’s Inquest overturned via lawsuits. The much maligned original Coroner’s Inquest had functioned as a rubber stamp process of automatically justifying police shootings for about 40 years. In spite of the proposed reforms standing up to those legal challenges and being declared constitutional by the Nevada Supreme Court, the entire process was scrapped in favor of this newer version that is even worse and less transparent than the Coroner’s Inquests had ever been. Basically, the new method of rubber stamping police shootings consists of the District Attorney declaring (every single time) that the killing was justified, then having someone present to the public the police version of events without any cross examination, witness testimony, presentation of evidence, or impartial representation. It essentially is designed in order to facilitate an official, institutionalized coverup, with very little opportunity for the public to question the official story they are being fed. You couldn’t ask for a much better opportunity to hide the truth and bury facts while advancing the official narrative. Nor could you more effectively sow mistrust and hostility within the communities that are effected by these killings, which historically have never resulted in any sort of accountability, regardless of how questionable they have been and whether the victims of the LVMPD’s trigger happy cops were completely innocent and/or unarmed.

The Police Fatality Public Fact-finding Review into the February 2014 death of D’Andre Berghardt Jr. will be held Monday, March 2, at 9 a.m. in the Clark County Government Center Commission Chambers at 500 S. Grand Central Parkway in Downtown Las Vegas. The review will be aired live on Clark County Television (CCTV) and streamed over the County Internet site at www.ClarkCountyNV.gov.

According to reports, Berghardt was shot and killed during a confrontation with law enforcement officers on state Route 159 near the Red Rock Canyon National Conservation Area.

The review of this incident will be presided over by Hearing Officer Chip Siegel. Mark Bailus will serve as ombudsman for the review. Both are longtime criminal defense attorneys in the community. Presiding officers and ombudsmen are selected by the county manager from lists approved by the County Commission. The ombudsman represents the public and the deceased’s family in this fact-finding review.