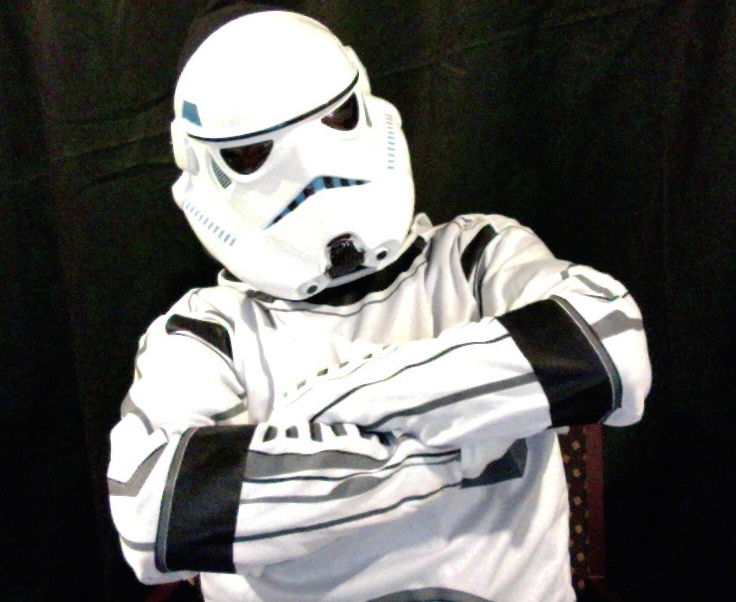 For the past three weeks or so I’ve been staying with DEO, of Greater Cleveland CopBlock, as he’s been working with me to rebuild the CopBlock Store and laying the foundation for the “CopBlock Network.” We’ve been excited about these advancements at CopBlock but you can only look at a computer screen for so many hours. Especially when you have a Stormtrooper costume and a brain full of ideas for filming the police, so DEO, Ken (aka, Liberty Phoenix) and I headed out to do some CopBlocking. The most interesting encounter of the evening happened after we filmed the cop that shined his light on me. When the traffic stop concluded we headed back to my car. As we were pulling out of the strip mall, we noticed the same cop parked awkwardly in the road and seemed to be talking to some young adults. Thinking he was harassing them for being out late I quickly jumped out of the car and headed toward the bus stop the kids and cop were at. As I got closer I heard one kid say, “You’re going to what?” and then the cop just drove off. When I asked the kids what the cop wanted they said he said something about taking the one kid; who obviously wasn’t 18 – probably 16, to jail for smoking a cigar. I guess the cop noticed me coming in my white stormtrooper costume and decided to end the engagement.

Our original goal that night was to find a checkpoint that we heard may be operating but when that fell through (there was not one that night) we decided to focus on speed traps. Parma ‘City Officials’ had recently reduced the speed on several roads in the are to 25, previously 35, and the cops were taking full advantage of it. Yet, every time we tried to catch one sitting somewhere, we encountered a traffic stop. So we spent most of the time filming those but rest assured you will see some more Stormtrooper CopBlocking from myself, so bookmark CopBlock.org, subscribe to my YouTube channel and Facebook page; you never know when Stormstroopers (or Uncle Sam) will pop up.