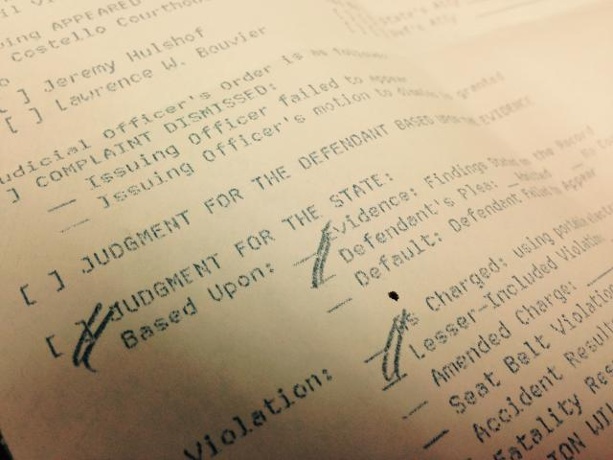 This was submitted by an anonymous reader, via the CopBlock.org submissions page. The original story can be found at www.wptz.com. It’s not exactly hard to figure out that Bill Bouvier got railroaded out of $217, even though he had conclusive evidence that he was innocent. Not that this is anything particularly unusual or even unexpected.
–

When Bill Bouvier was stopped Dec. 29 in Hinesburg while driving home from work, he tried to explain to the young officer there had been a mistake.

Bouvier, 59, said he often rests his head in his cupped palm while making the drive home to Bristol.

He assured the police officer he hadn’t touched his cellphone since getting behind the wheel.

The officer was unpersuaded and issued a $162 ticket…

Bouvier says he hadn’t used the phone and appealed the citation.

He also requested records from AT&T, his wireless carrier which showed no calls had been made between 4:07 p.m. and 5:21 p.m. — nothing close to the time of the 4:30 p.m. traffic stop…

She could not accept the phone records as evidence, Bouvier recalled, as they might be doctored.

Bouvier says he left the hearing shaking his head. Now, the $162 fine had jumped to $217 with his appeal and court costs.

He said the court had taken the officer’s word, after refusing to hear his defense.

“Absolutely,” Scott said. “That’s why you want to be sure an electronic device is in their hand to activate the (traffic) stop.”

Scott said he, too, was surprised the hear the phone records hadn’t been enough to have the ticket dismissed…

Of course, as is the case in most minor citations, Bouvier went ahead and paid the fine to “make it go away,” rather than spending even more money and lost time fighting it further, even though a former prosecutor and a Lt. in the Traffic Division both agreed that he likely would win, if he did. That tendency is why cops will write these citations even if they are clearly wrong. And the revenue and probable cause excuses that these type of laws create is the reason why they exist in the first place.

Last week Bouvier said he paid the $217 fine and court fee to make the matter go away.

But McArthur said he might have appealed to a higher court and likely won the case.

“There is a defense, a legitimate defense, and he should have prevailed,” the former state prosecutor said.

In the first three months since Vermont’s new law took effect last October, police officers have issued 388 tickets — and 383 warnings for using a hand-held electronic device behind the wheel.