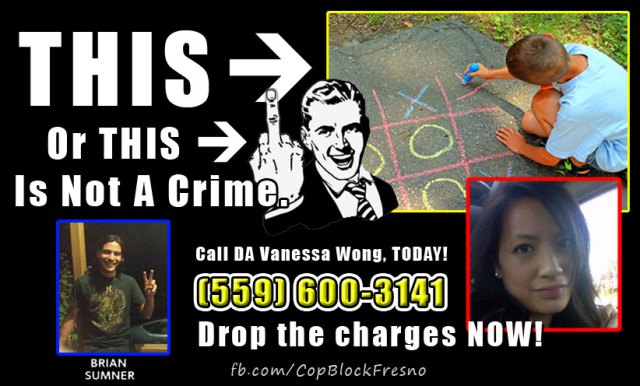 Literally, Thrown Out of Court

Last month, on February 10th, Brian Sumner was scheduled to appear in court for a pre-trial. His charge is vandalism of less than 400 dollars. This charge was based on him drawing with chalk, which causes no real property damage and can actually be washed off very easily with water. (see below or here for more details)

While he was waiting for his girlfriend to pass through the security checkpoint, Fresno Sheriffs deputies began to harass him for where he chose to stand. When asked for ID, Brian asked if he was being accused of a crime and if he was being detained or if he was free to go. The statements angered deputy Requino, and he dragged Brian out of the lobby. Brian attempted to enter the courthouse again, and the same sheriff that dragged him out, said he would be allowed inside if Brian produced ID. Brian’s reply was “I’ll show you my fucking ID.”

Right after this sentence was out, a sheriff shoved Brian to the ground, and four deputies lifted him off the ground by his arms, and legs. He was carried out of the courthouse and detained for no reason other than his freedom of speech, and a potential bad attitude.The Cpl in charge; Cpl Passmore said he would make sure the judge knew about the interaction, so no warrant would be issued. After checking with the public defender it was clear that this did not happen. This action by Sheriff’s Deputy Requino, and Cpl Passmore as well as two unnamed deputies resulted in Brian not being permitted to appear, for his pre-trial, as well as a bench warrant being issued for his arrest.

Please make sure to call the Fresno District Attorney, and demand that the charges are dropped, and that the city of Fresno choose not to waste over ten thousand of your tax dollars on a trial that will lead to nothing but a not guilty verdict. Join the call flood. https://www.facebook.com/events/398619406972453/ Witness footage of the detainment can be seen here. http://youtu.be/jCcJreWv60A

Date Requested for Call Flood: March 9, 2015 (Court is scheduled for 9am PST/12pm EST)
Outfit/Individual to Call: Fresno (CA.) District Attorney’s Office – Vanessa Wong
Phone Number(s) to Call: (559) 600-3141
Fax Number: (559) 600-4400
Email Address: damail@co.fresno.ca.us
Preferred Request/Statement: Tell Vanessa Wong (or whomever answers) that chalk is not a crime, and flipping off a cop is a Constitutionally protected gesture under the First Amendment. Also, ask that a video camera, which was stolen by police in a subsequent incident (using the excuse that it was evidence) be returned to Brian.
Further Information: See the Facebook Event Page or Cop Block Fresno website post

Brian Sumner of Fresno People’s Media, who is also one of the people involved with Cop Block Fresno, has requested a call flood to show support for him during a court appearance scheduled for March 9, 2015 (at 9am PST) and to urge that the unfounded charges of vandalism (for writing with washable sidewalk chalk) be dropped and an end to repeated harassment he has faced from employees of the Fresno Police Department, since the protest where that chalking action took place.

In the past, call floods have proven numerous times, including a previous case where Brian Sumner himself was charged with obstruction for filming cops, to be an effective way to deter the police and court official from pursuing frivolous and/or harassment based charges. We strongly encourage you to call and show that people are watching and will not tolerate these sort of retaliatory actions against peaceful protestors, such as Brian Sumner.

Chalk washes off with water and it comes off much easier than the blood on the hands of the Fresno Police Department, who prompted the original protest by unnecessarily shooting someone 17 times, ever will. During a protest against police brutality, and recent police shootings in Fresno, Ca. Brian Sumner used chalk on the Fresno Police Department Memorial. Phrases such as “FPD = Guilty”, “Badges Don’t Grant Extra Rights”, and “Who do you call when the police murder?” were written in an attempt to call attention to the issue.

Brian was arrested (see video below) with one other individual, and charged with vandalism of less than $400. Brian has already appeared in court twice for this matter, and on February 10th will be appearing for Pre-Trial. In addition, Brian is also facing charges the same day stemming from a separate incident of resisting arrest, and making a threatening gesture. This particular case was clearly a situation of harassment (one of several since the original protest) by Fresno police in retaliation for the previous chalking action.

Near the end of last year, Brian was sitting in a park waiting for a friend when Sgt. Andy Murcado of the Fresno police arrived, and pulled a taser out on Brian. He claimed that Brian was standing on the corner flipping off passers by, and yelling “Fuck You”. This claim is completely false, and even if it was true saying “Fuck you”, and using your middle finger are both actions constitutionally protected under the First Amendment. Sgt. Murcado, and multiple other officers grabbed Brian, took him downtown to be processed, and refused to return his video camera to him claiming that the video of the interaction between Brian, and the officers was evidence of a crime being committed. That video is unavailable at this moment, but Brian is working on having it returned him.

Brian is asking that everyone who is available to, please call the Fresno DA’s office, and remind them that chalk is not vandalism, as there is no permanent defacement, and police kidnapping activists out of parks on bullshit reasons, then stealing their property, are symbols of a society in decline. Demand that they drop the charges against him, and end the harassment.

Area Cop Block Affiliate: If you live in the Fresno (CA) area, you can help Brian Sumner and others advocate for police accountability and your neighbors’ rights by connecting with Cop Block Fresno, via CopBlockFresno.org their Facebook page and/or their Ustream channel. In addition, if you live outside Fresno, you can find the appropriate affiliate in your area by consulting the Cop Block Groups page or by Starting a Local Group.