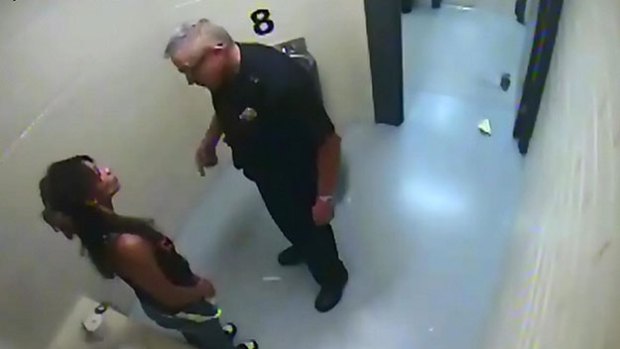 This was submitted via the Cop Block Submissions page Denver, CO PD Officer James Medina was fired last Wednesday, because of an incident that took place in July, 2014, in which he is accused of using excessive force against Seyrina Trujillo. Medina had claimed Trujillo, who was arrested on July 10th for allegedly attempting to interfere when officials were taking her boyfriend into custody, had spit on another officer and kicked him in the face. He then proceeded to struggle with Trujillo in the holding cell. The camera shows him throwing her to the ground and choking her until she became unconscious.

According to video of what happened next, obtained by CBS4, when Officer Medina took Trujillo into a holding cell, he ordered her to remove her belt and shoes, but the woman did not immediately comply with the order.

When Trujillo continued to ask questions but did not surrender her shoes and belt, Medina engaged her in a physical struggle which was captured by a video camera in the cell. During the struggle, the officer can be heard numerous times telling Trujillo not to bite him.

Eventually Medina was able to pin Trujillo to a bench in the holding cell and he placed his right knee against her neck. When he got off Trujillo, the woman went limp and fell to the floor, apparently unconscious. She remained blacked out on the floor of the cell for several seconds before appearing to regain consciousness.

She received no medical attention and Medina did not report the incident.

With the announcement of James Medina’s termination, came word that Medina has obtained an attorney in order to file an appeal.