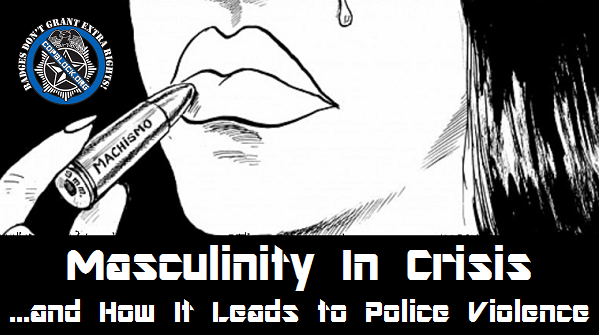 In the following article I am going to explore some perspectives that will undoubtedly offend some people. It is not my wish to do so. I am trying to upend every corner of our social structures to help understand why things have gotten so out of control. Conversations about gender and gender roles often cause a polarization between tradition and progress. Neither of those paradigms really apply to what I wish to convey. In examining the issues of gender I honestly believe we can shine some light on the police problem. I ask that you set aside for a moment your biases, beliefs and arguments to hear what I have to say. We are all here working towards a common goal and you will likely find that underneath our language, we probably all see and feel similarly about these issues.

“I think there could be a case made that there’s sort of a crisis of masculinity in the West. Particularly with white males.”
-Scott Thompson (Kids in the Hall)

It is a shame that masculinity, manliness, manhood or whatever you want to call it has become a sort of shameful taboo in our culture. Where it is celebrated, it is often done so with hyperbole and shallow caricaturization. It has become equated with these shallow symbols, so that manhood has been reduced to these embarrassing machismo archetypes. The falsehood which underlies these bad generalizations is that masculinity is an opposing force to femininity. Nothing could be less true. The masculine and feminine forces have no intrinsic incompatibility. The opposite is quite true. These forces can belong to the experience of all biological sexes. In their acceptance, understanding and balance we find harmony and peace. Yet in their rejection, they become powerful tools of those who would profit from the disorder caused by such distracting lies.

“Equality is not a concept. It’s not something we should be striving for. It’s a necessity. Equality is like gravity. We need it to stand on this earth as men and women, and the misogyny that is in every culture is not a true part of the human condition. It is life out of balance, and that imbalance is sucking something out of the soul of every man and woman who’s confronted with it. We need equality. Kinda now.”

The destruction of the feminine and masculine go hand in hand. Through the deprivation of our natural and social tendencies towards the roles that befit us as individuals we are delivered to an identity crisis. This crisis causes us to seek solutions through identity politics and the creation of new hyperbolized roles. Our political landscape has become littered with obfuscating discussions about gender and gender roles that are little more than red herrings celebrated by people suffering their own identity crises. The new roles have become mock-ups created from too much focus on singular aspects of masculinity and femininity. The health of both has declined accordingly.

“Masculinity is not given to you, it is something you gain. And you gain it by winning small battles with honor. Because there is very little honor left in American life, there is a certain built-in tendency to destroy masculinity in American men.”
-Norman Mailer

Because our abusive power structures have been under the leadership of men for so long there is a tendency to equate manhood with these patriarchal structures. Yet these structures also marginalize, alienate and prey on males just as often as females. Sometimes more so. Police violence is most often exercised against men.

“In the meanest are all the materials of manhood, yet they are not rightly disposed.”
-Henry David Thoreau

The crisis of masculinity has left men and women who aspire towards these manly traits through authority to become highly volatile by way of their insecurities. The distortion of masculinity as it has happened through countless social forces has created a new masculinity focused on all the wrong parts. This is just as true of criminal elements and individuals as it is of the authoritarian forces who are supposed to protect us against them. The rapist and murderer is just as much a product of the social sterilization of positive masculinity that informs tyrannical power structures like the police.

Violence, aggression and domination are the domains of the incompetent. By working against the human tendencies towards social roles through endless redefinition, we have weakened their strong foundations. In their place are social and gender roles that invite uncertainty, hate, self-loathing and insecurity. Where these thrive, so shall incompetence and the unnecessary violent struggles they lead to.

“The men whose manhood you have broken will loathe you, and will always be brooding and scheming to strike a fresh blow.”
-James Larkin

I believe this has become the case with masculinity. Through its distortions and rejection it has metamorphosed into its own evil twin. Because masculinity has come to be viewed with such ferocious negativity, it has become something truly worth despising. The sort of masculinity displayed by many police officers should be regarded as a tragic, artificial perversion of masculinity. In America, men make up 87% of the police. But it is not only men who can display masculine characteristics or their substitute caricaturizations. Just as men may also display feminine aspects, or cartoonishly hyperbolized versions of them.

“Manhood coerced into sensitivity is no manhood at all.”
-Camille Paglia

Our collective belief in a bastardized, ultra-violent version of masculinity has served to elevate the feminine above the masculine. I believe that this has been done through several means. Some factions of radical feminism seem to have adopted such a distortion of feminism that I believe the movement’s early intellectuals, like Margaret Mead, would be discouraged and disgusted. This does not mean that there are not and have not always been feminist thinkers who maintain a balance between the roots of feminism and its continued progress.

It was the dissemination of propaganda by people like CIA troll Gloria Steinem that began a destructive process which replaced feminism with a feministic misandry that relied upon emasculation to function. Not only has this been highly effective in creating a distraction from the social unrest it caused, it has contributed to the creation of a new manhood which is destructive to all.

“Men are recognizing that they have been forced to conform to a very narrow and rather two-dimensional picture of maleness and manhood that they never had the freedom to question.”
-Andrew Cohen

This new manhood is exemplified by the violent authoritarian. The abusive police officer and reckless soldier are both products of this new contrived masculinity that has emerged in the last century. Timeless ideas about manliness have given way to ideas that degrade individual men and women alike. These new ideas have created a hyperbolized manhood, a sort of macho stereotype that has discarded the more difficult and unpleasant responsibilities of manhood and replaced them with narcissism, bigotry and aggression. The timeless qualities of masculinity encompass the entirety of the being while today’s substitutes are a shallow, ‘roided up shell of violent, cowardly muscle.

“I’ll be the judge of my own manliness.”
-Dennis Rodman

Yet it is not just gender issues and identity politics at work here. Numerous forces have coagulated from our environment to threaten masculinity beginning in boyhood. Our foods, medicines, institutions, media and other factors have worked, even if unintentionally, to skew the idea and execution of the masculine.

“Do not fall prey to the false belief that mastery and domination are synonymous with manliness.”
-Kent Nerburn

If this research is any indication, our very way of lives may be working to distort manliness in our society. Industrialism has benefitted mankind greatly, but it has also created numerous pitfalls. One of these is that by removing much of the skill and effort needed to survive, we have become complacent in our evolutionary roles as a species and/or civilization. If this is the case, we must foster an awareness and appreciation of the issue and use our creative capacities to fight the sort of roles it creates which could lead to our destruction.

This is all conjecture without an example to tie into, so I shall provide one. Earlier this week I wrote about the shooting death of Derrinesha Clay. Derrinesha was killed senselessly by a police officer after breaking and entering a bank. In speaking with a friend, who is well-versed in firearms training, he assured me that the officer was probably well within protocol to fire his weapon. Yet he also said that it was immoral and unnecessary. Training exists to sharpen reflexes and instinct. It does so very effectively. Yet there is little to no training in the more subjective observations an officer uses to determine force. While violence may be within protocol, it may lie far outside of our morals, ethics and values. Masculinity helps us to inform our decisions towards aggression with our morals, ethics and values. Without them, the training becomes a set of hostile commands that endanger social justice and harmony. Where our character is lacking and training is allowed as a substitute, we are prone to create destructive situations and environments.

It is my contention that an individual with a well-adjusted ideology and performance of masculinity would not have pulled that trigger. Compassion, courage, understanding and the desire to protect those weaker than ourselves (even when they threaten us) should have stayed his trigger finger. But they did not. Instead, imbued with a toxic caricature of masculinity, he resorted immediately to violence, which should fall far lower on the list of options to the kind of man I think we should aspire to be, create and honor.

“First, find the man in yourself if you will inspire manliness in others.”
-Amos Bronson Alcott

I firmly believe that this crisis in masculinity contributes towards the crisis we are experiencing in an escalating police state marked by violence, corruption and abuse. I believe that well adjusted men and women who identify with masculine roles or attributes would not commit such atrocities or allow them to be perpetrated with such perpetuity. Honor, courage, pride, dignity, strength, a sense of justice and the other ideas associated with positive masculinity would intercede on humanity’s behalf and prevent such atrocious slippery slopes into barbarism. In order to de-escalate the aggression and tyranny, we must examine the problem from every angle. In resolving the crisis of masculinity we may do much to stem the flow of hyperbolistic machismo that flavors those individuals within our institutions. I also believe that it would help to alleviate many of the other social issues which have been constructed upon a form of authoritarianism colored by a tragic bastardization of what it takes and means to be masculine.

It is not the feminine which is the opposite of the masculine. It is fear, cowardice and control which lie in opposition to masculinity. It is cowardice, fear and control which leads to violence, abuse and oppression, while masculinity is a gift to humans to give us the conviction to serve and protect one another with strength and courage, transparency, understanding, peace and caring.