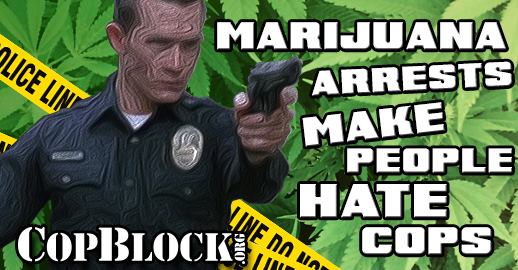 Marijuana arrests do in fact make people hate cops. My second interaction with a cop ever was for simply possessing a pipe I’d used to smoke marijuana out of. (My first was shortly before that for smoking a cigarette.) I’d been stopped while with a group of friends and all of us had been illegally searched. Obviously, none of us had anything dangerous on us, but that didn’t stop the police from hauling me into the PD and charging me with “possession of drug paraphernalia.” I was 17 years old at the time and although the charge was eventually dismissed, as a 36 year old man, I’m still haunted by that “criminal record” which is easily found by searching my name in WI CCAP system. Despite a majority of US citizens preferring that police spend their time on “real crimes,” there’s too much money to let such a lucrative practice go up in smoke.

I came across this video recently. It depicts Waukesha Alderman Aaron Perry and friends (one who appears to need his slippers and a beer) grilling a man over his employment at the local gas station. Despite the fact that selling alcohol to minors already carries substantial criminal and civil penalties and that the gas station itself has a vested interest in hiring people who they feel will comply with said law, the Aldermen decide their committee’s interrogation stands between chaos and order for those purchasing a Snickers bar and a 6 pack of Miller Lite.

On the day we as patriotic Americans commemorate our independence from tyranny, Adam C. was taking part in July 4 festivities in Whitewater, WI. Whitewater is home to UW-WW which means It’s a cash cow for the local police forces.

Adam had locked his keys in his car and at the time, apparently, believed police are here to help and would assist him in unlocking his car door.  UW-WW campus officer Hanecamp jimmied opened the car door. “Thank you kind Officer, have a nice day,” Adam C. probably thought.  Of course this was just the beginning of what would be a long, expensive, and arduous process for this “offense.” I can only speculate how the highly trained officer convinced Adam C. to let him search the vehicle. What I do know is that by the time Adam was handed off to City of Whitewater PD officer Shawn Reif, he was told he had to pay $1,193 for the discovery of a small amount of pot and a tin foil pipe. According to a public records request, the body cam video of this incident had been purged after 120 days in accordance with policy. (More on Whitewater, WI PD here.)

So now after nothing more than being naive as to the true role of his local police force, and after paying $1,193 in “fines,” and likely coming to terms with the fact that this arrest will effect the rest of his life, Adam is ready to move on. He moves to Waukesha and gets a position at the local Kwik Trip gas station. Little did he know that for such a position, he’d have to stand before this tribunal. It’s laughable what these Aldermen, who are on the taxpayers’ clock, ask Adam before finally signing off on his pursuit of happiness. (I will note that Waukesha Aldermen are not drug tested. Perhaps that should be discussed.)

We’ve all run into “those people” who want nothing more than to tell you what to do. They impose their will purely because they can.  They feel that their decisions, even basic ones such as where you should cross a vacant street, should be uniform and are better for you than your own. This becomes a big deal when their will is backed by a violent and robotic enforcement unit oft referred to as the Police.

As I’ve written before, Waukesha PD has been involved in numerous incidents of brutality, evidence deletion, and just plain bullying. After a recent survey I conducted of about a dozen dash cam/body mic videos I found that around 90% of WPD videos which are supposed to be available are “lost” or corrupted in some manner.

During the summer of last year, shortly after the $300,000 Schroeder settlement was paid, I mounted a campaign to fix the broken dash cam system in our fine city. As a former truck driver, I suggested in a detailed email to Alderman Aaron Perry, Police Chief Russel Jack, and my Alderman Chris Hernandez, a “pre trip/post trip” style inspection conducted by each cop to insure and document their working system. The police policies already dictate cops must make sure their system is working and this would simply put the checks on paper. I spoke for my 3 minutes at a City Council meeting and felt this was an easy fix.

Initially, Alderman Perry was receptive to my ideas, declaring “this type of thing is our job.” For some reason, possibly upon the advice of fellow Alderman Chris Hernandez, Perry later did an about face and stated that City Council can not interfere with the day to day activities of the PD.

But when it comes to the day to day activities of the people, Alderman Aaron Perry is more than happy to interfere. He’s cited here declaring that jacking up city fines will “produce all kinds of reduction in crimes” and bring in $50k in money for his friends. The police Chief supported this idea at a city council meeting, saying that with new “court fees” and “court costs” a $10 citation would magically bring in $73.60. I wonder what the current $606 pot citation would become.

On February 21 Perry rolled out his newest greatest idea of a “Social Host” ordinance. According to an article he linked on his Facebook solicitation for public comment, a special law would be made to target “(as few as) any group of 2 or more persons who have assembled or have gathered together for a social occasion or other activity.” This would apparently be used to target underage college drinking parties by nearby Carroll College students. It’d also be a great opportunity to search “groups” for “weapons (pot)” for “officer safety. It would also ensnare every single Packer Party I’ve been to.

There really is no escaping the war on pot. I’m working on an incredible story of Waukesha police department’s distinguished filth. I won’t go into detail today, as the case is ongoing and would probably take a series of articles to fully explain. In short, a neighbor calls in an “argument” between other neighbors outside. Waukesha cops show up and (after kicking in the door) determine nothing physical occurred, but arrest 1 party for domestic abuse and obstructing (for requesting a lawyer.) The charges are dropped after 14 months, but the alleged victim (listed as victim on pot tickets reports) is arrested for 1.4 grams of weed and 2 glass pipes. That individual was a trial defendant in one of the 210 trials (not plea deals but trials) conducted in Waukesha Municipal “Court” during 2013 and 2014 by Judge Joseph Cook. Every single trial defendant was found guilty in Cook’s court during those years. This persecution happened under the watchful eye of City Attorney Brian Running. The case is being appealed.

These are just a few examples of the 750,000 pot arrests each year by cops in the USA. These arrests represent just a small fraction of people who actually commit the “crime” of possessing weed.  According to a recent poll, about half of Americans have smoked weed. Perhaps not every single one of these people hate cops for arresting pot smokers, but a lot of them do.