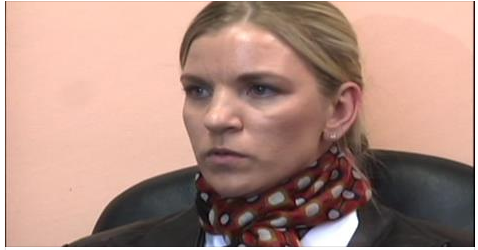 On February 5th 2015, Officer Kristi Sager of The Binghamton Police Department crashed into a parked car and fled the scene of the accident, allegedly smelling of alcohol.  She was subsequently suspended on February 11th, and is fighting to get her job back.

Sager claims that she did not drink that night and simply slid off the road after hitting an ice patch, despite five witness claims that she smelled of alcohol.  She also says she left the scene of the crime after reportedly having an “anxiety attack”, and needed help.  She is currently fighting misconduct charges after the incident.

As can be seen in a TWC News interview: Sager is not taking responsibility for her actions on that Thursday night, and makes several excuses of why she shouldn’t lose her job:

“I had hit my head hard on the steering wheel, I was bleeding in my mouth, I could taste it and I started having an anxiety attack. So I told him I had to go because I didn’t want to sit there and have that in front of people”

Sager later goes onto say that the Police Chief of her department- Joseph Ziksuki, is only giving her those charges in retaliation for refusing his sexual advances.-

“He’s a very vindictive retaliatory type person and when things don’t go his way, whoever doesn’t give him what he wants is a target and their job is in jeopardy”

Sager sees no reason why she should be suspended and lose her job, despite leaving the scene of an accident, and despite the mounting evidence of her driving under the influence.  Now she claims she is a victim, and is planning on suing the city if she can’t get her job back.

The hypocrisy continues March 24th, when Sager has her next hearing.