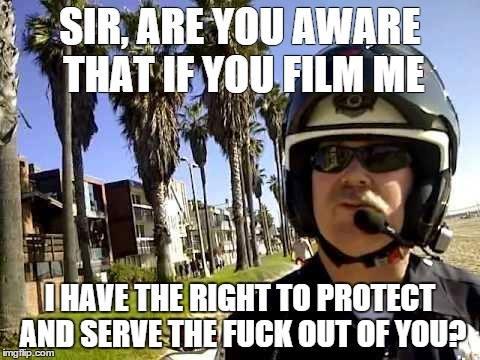 According to Paul Donnelly’s YouTube channel on, or around, January 12th, 2015 he came across Michael Young of the Earlsboro (OK) Police Department. Young is upset from the start saying, “why are you over there filming me work a crash? Is it that interesting? Seriously is it that interesting?” See for yourself.

That is probably one of the most surreal conversations ever between an officer and videographer. What’s particularly interesting to me is that Young seems to be wearing a body camera, as well. Meaning he was fully aware that he was being recorded and still choose to blatantly threaten (IMO) Donnelly.

After Young asks a series of questions about filming, Donnelly finally says, “Am I doing anything wrong?” Young then claims that Donnelly is following him around. Donnelly says he’s not following him, but was merely trying to get a cup of coffee when he noticed the lights and decided to film. He goes on to state that his personal experiences are the reason why he films and concludes his explanation by asking, “Am I free to go?”

“No. I want to know what you’re doing”

The pair go back and forth, Young claiming he’s being followed and Donnelly standing firm that he’s merely recording a public official doing his duties. As Young continues to push the issues, the true light of frustration comes out when Donnelly says, “Yeah, because I don’t trust you.” Young clearly seems shocked, or insulted, when he says, “What’s not to trust?” (Seriously, the cop honestly asked what’s not to trust, see here) Donnelly continues to keep his cool as he explains how Young’s actions are the reason for his lack of trust.

Of course, Young doesn’t agree, nor does he acknowledge any misbehavior or try to at least see Donnelly’s point of view. Instead, he decides to threaten Donnelly saying, “if you continue to follow me around and walk up on my stops I will arrest you.” Donnelly tells Young to contact the chief because he plans on filing a misconduct charge against him anyway. That’s when Young says, “You need to… because you’re really starting to irritate me.”

After another back and forth Young makes the claim that Donnelly has made threats in the past, I guess to justify his threats at that time. Donnelly quickly points out that if he had made a threat he’d be arrested, or at least have warrants out, and that Young has no proof of any threats. Adding that Young was the one that approached him, not the other way around. The pair finally part one another with matching warnings of, “You need to stay away from me.”

What makes it a little more interesting is that the video below is also posted on Donnelly’s YouTube channel. It’s not confirmed – via the YouTube description – but it seems to be the prelude to the video above. If that’s the case it’s clear that Donnelly wasn’t walking up on Young’s scene or causing a disturbance. Again, see for yourself.

Is this how you want those who claim to protect and serve you to treat you? How about Donnelly? This is a much better example of how to remain calm when dealing with a police officer, unlike the CopWatcher who became obnoxious that I blogged about last week. What do you think? Tell me your thoughts in the comments below.