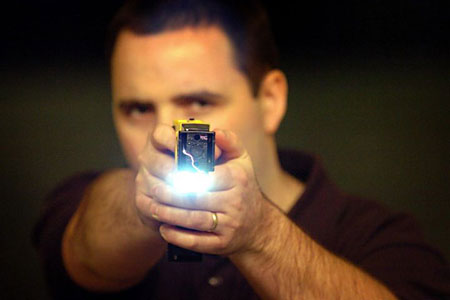 The video above by CBS6 – out of Richmond, VA – covers an incident at Powhatan Junior High School on Friday (March 13th) where an 8th graders became so unruly the he ‘had to be tazed’ by the school’s liaison officer. In the article posted with the video the sheriff’s department claims that, “the SRO tried to arrest the student, but he attacked the officer and then tried to flee. The officer then used the Taser on him.”

Chris Parks, whose children go to the school, said, “It’s obviously scary to see a child get Tased, it was a little shocking to learn. I hope the charges and officer’ actions were justified.”

I cannot see how these actions could be justified in anyway. Tasers are a very dangerous weapon despite the attempts of police – and manufactures of tasers – to sell them as ‘non-lethal’ devices. Even if this 14 year was attacking the officer, as they claim, how he (and the others around) couldn’t gain control of the situation is appalling. Are officers trained in any other tactics to subdue a person other than using more force or deadly weapons?

Why didn’t this officer simply follow the 14 year old? Or head to his house? How many places do 14 year olds have to hide? Does the officer realize that I could easily be writing a blog post about an 8th grader who was killed,ad of tased, by a cop? Then to charge the kid with felony assault of an officer, please! The kid was the one who went to the hospital, not the officer, and these felonies could ruin this kids life.

I’ve said it before and I’ll say it again, “This is what a Police State looks like.”

*I’ve left a message with the Sheriff’s department and will do a follow up on this story Monday. Stay tuned for more details.*