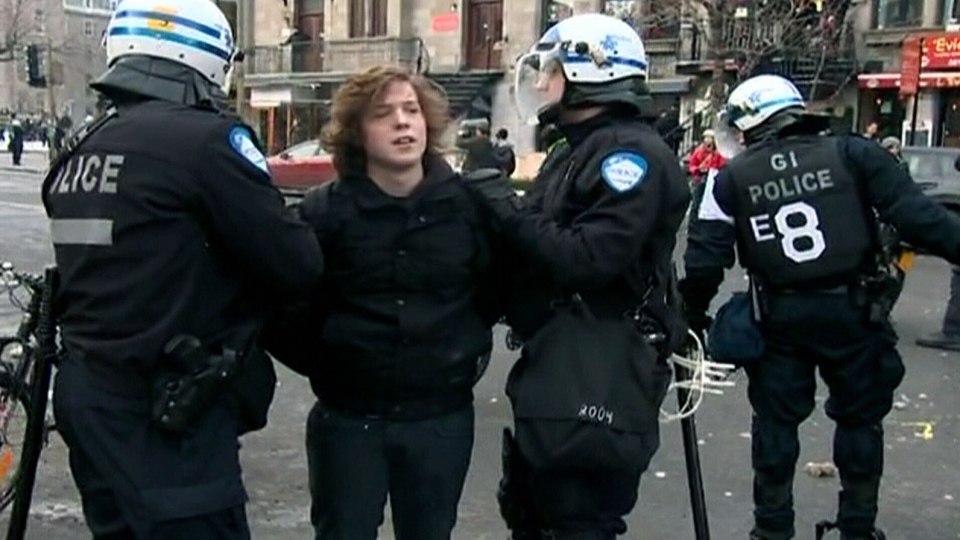 The police state doesn’t know any boundaries and stretches farther than just the US(s)A. Last week, I blogged about the pig head left outside the Police Brotherhood building in Montreal. On March 15th, the Montreal Police shut down, at least part of, an anti-police march before it could even begin. Are these two events connected? I do not know, but it wouldn’t surprise me if they were.

A Montreal march against perceived police brutality ended on Sunday with one arrest and nearly 100 tickets being given out.

The march was declared illegal as soon as it began because organizers had not informed authorities of their route.

As protesters split into different directions, police quickly surrounded a group of about 30 people, who were boarded onto waiting city buses without incident.

Police look on as protesters gather at Berri and Ontario Sts. ahead of the annual anti-police brutality march in Montreal Sunday, March 15, 2015.

The vast majority of tickets were handed out for highway code violations because of protesters blocking the street. No injuries were reported.

Eight police cars were vandalized during the demonstration.

The demonstrators, who waved flags and shouted anti-police slogans, gathered at the street corner where a homeless man was fatally shot by a Montreal police officer in February 2014.

The protest against police brutality has been held in Montreal for nearly 20 years, with some ending with smashed-in storefronts and damaged cop cars.

The organizers of Sunday’s march, the Collective Opposed to Police Brutality, were planning to hold a second anti-brutality protest to coincide with Montreal’s St-Patrick’s Day Parade next Sunday.

Montreal’s mayor has promised there will be no tolerance for anyone planning to disrupt the family-friendly event, which has been running for 192 years.

The police claim that the protesters were arrested for failing to provide marching routes that they had been asking for since Tuesday. Two other groups were allowed to march because one did provide such route and the other walked on the sidewalks. In the US(s)A we have constitution free zones, free speech zones and assembly permits. What does it mean when you can’t walk down the street and voice your concerns about the people with guns who terrorize your community?