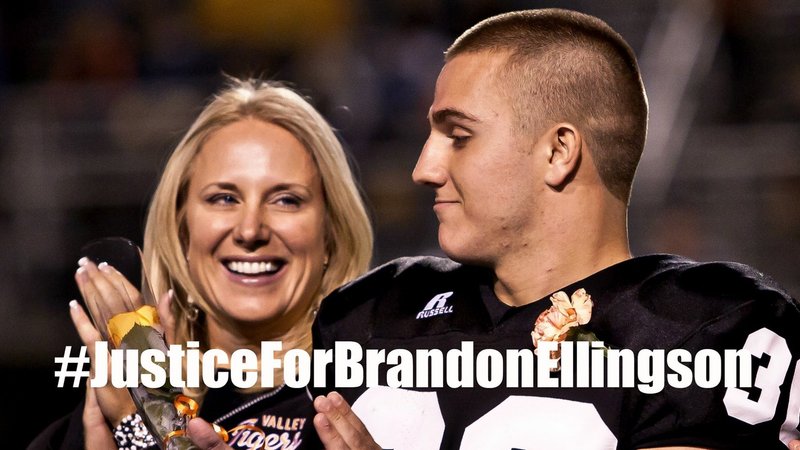 On that day, Brandon Ellingson was out with his friends boating at The Lake of the Ozarks in Missouri. He was arrested for suspicion of boating while intoxicated. By taped accounts of the arresting officer himself, Brandon was respectful and compliant while he was taken into custody, placed in handcuffs, donned with an ill-fitting and inappropriate life vest, and driven away at extremely high speeds. Brandon was ejected from the boat when it hit a large wave at 43 MPH and when he hit the water, the life jacket floated away from him. With his hands tied behind his back, Brandon struggled to stay above the water for many minutes. It wasn’t until a woman in a passing boat yelled for the officer to jump in and save him that he finally jumped in the water, but by then it was too late. While the patrol’s boat was equipped with three audio-visual cameras, the memory cards were not in place and the atrocious events of the day were not recorded. Brandon’s body was recovered the next day in 70 feet of water.

Rather than bring in a person outside of the Missouri Highway Patrol to investigate the death of a civilian in their custody, they conducted their own internal investigation. Then they had a coroner’s inquest with a hand picked jury; crucial witnesses and evidence were left out and no cross-examination was allowed. Jurors deliberated for less than 8 minutes before determining Brandon’s death to be accidental. Four days later, the prosecutor said she would accept the jury’s decision, and no charges would be filed against the officer.

I’m not the only person who thinks the circumstances of my son’s death are suspicious and outrageous. The Missouri State House speaker has created a committee to investigate safety on the lake and my son’s story has been reported in news outlets like The Kansas City Star, Des Moines Register, and USA Today. The person responsible for Brandon’s death needs to be held accountable, so that nothing like this ever happens again. The people that helped cover-up and whitewash his death as a tragic accident need to be held responsible, as well.

Brandon was a really special person. He had an infectious laugh and a love of life, and no matter who you were he made you feel like you were his best friend. When Brandon was in high school, our home was a gathering place for all kinds of kids — older, younger, different schools, different sports. They all came to hang out with Brandon. That’s who he was. He brought people together.

And now, people are coming together for Brandon again. We’re coming together to demand that the Department of Justice hold those people responsible for taking the life of a bright, promising young man and all those covering up the facts. It’s time to shine a light on what really happened to my son.  Please join me in demanding the Department of Justice investigate the Missouri Highway Patrol, specifically in regards to the death investigation of Brandon Ellingson, while in their custody. For updates on our progress, please visit www.justiceforbrandonellingson.org; https://www.facebook.com/JusticeForBrandonEllingson