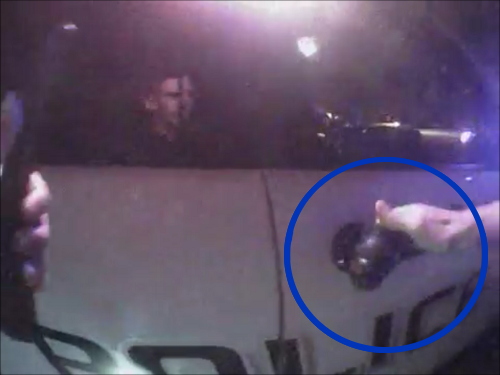 On Sept. 9th 2014, Salina Kansas Police employee Tyler Golsby pulled over Troy Dejulio for a non-working tag light. While reviewing the lapel cams to point out the deceitful and dirty coercive tactics these officers were using, I noticed a little strange behavior from Officer Carswell, an officer who was called as back up because the occupants had “prior drug charges” and the passenger “continually manipulated her purse”. Officer Carswell just happened to be a K-9 unit officer. And, of course, one of the other backup officers was a female. Probably didn’t have anything to do with a pre-planned search now would it?

In this video, we expose Officer Carswell’s dirty lowdown scum of a lie tactic as he deceitfully sticks his finger into a dog treat holder, presumably to gather the smell of a sticky sweet treat from inside the holder to wipe on the vehicle and generate a false alert from the K-9. After watching this video please call and inform the Salina Police Dept. that you have seen Carswell’s dirty tactic. I’m just guessing, but I bet there’s some good excuse for having stuck his finger in the treat holder. It should call into question any drug detection that officer Carswell and his K-9 have “sniffed” out.

Below you’ll find links to three lapel cams. In these videos, you’ll see that officer Carswell, the K-9 officer, had no knowledge of what traffic violation had been committed. You’ll see him lie and tell Troy that he has legitimate reason for running the dog, the traffic stop detainment, and that he HAS to get out of the car or he will be arrested. I find his lack of knowledge to the initial stop very telling. Not only does officer Carswell bully Troy wrongfully out of the car, but he later lies for the police report and stated he smelled alcohol on Troy and that’s why they were asked to exit the vehicle. There is no mention of alcohol till after Troy and the passenger are out of the vehicle. And it wasn’t a statement of smelling alcohol, it was the investigative tactic of trying to further the investigation with questions like, “how much have you had to drink”? Not implying he smelt it, but implementing his common in general investigative questions trying to gain cause for furthering the investigation.

You’ll also see that, though the passenger refuses consent to a search, they search her anyway. You’ll see one officer try and get information from a phone in the vehicle and you’ll see an officer rifle through the passengers purse and flip through her address/calendar book for a few. They did find a bag of broccoli in the car. Regardless of any outcome, the initial search was illegal because no consent was given and the stop was for a tag light out, which is not reason for a search alone, yet no other reason is given for the search. Both the driver and passenger had their rights violated. The moment Troy was forced from his car for a traffic violation, this contact became a violation of rights. Let alone, Troy being set up by Carswell and causing a false K-9 alert.