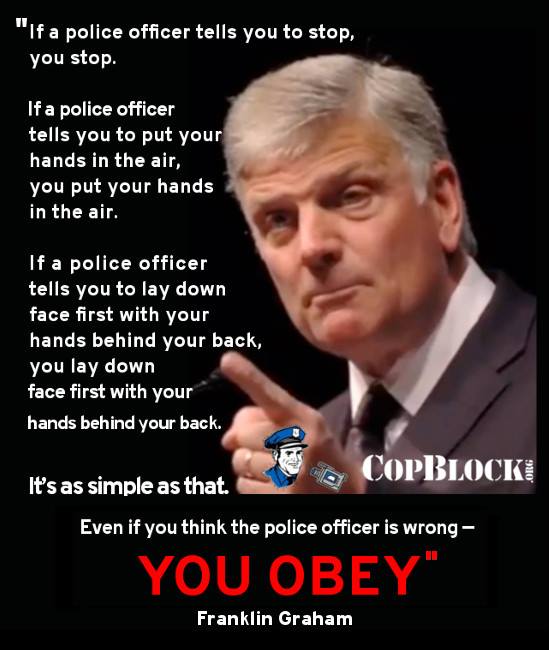 Franklin Graham, who’s the President of Samaritan’s Purse and Billy Graham Evangelistic Association, posted the status below to his Facebook page:

Talk about the worst police advice ever. Does this guy truly believe that things would be better for people if they were more obedient to police officers? Maybe Graham hasn’t read about John Crawford, who was shot inside a Beavercreek Walmart by police who demanded, “drop the gun” while firing theirs? Giving John no time to react before he shot and killed him. Same happened to Tamir Rice, a 12 year old boy, who was shot by Cleveland Police officers who were also giving commands while firing their weapons. The saying, “Hand Up Don’t Shoot” became popular because police have been pulling the triggers on their firearms faster than bolts of lightning strike the ground. Proving that even when orders like, “put your hands up”, are followed police still shoot (tase or beat) you – and get away with it. What Graham suggest here is that if you don’t obey an officer then the officer is justified in shooting you. Or that it’s your fault because you could have ‘avoided it’ with blind compliance. This is simply absurd.

Graham’s statement proves he knows very little about about the police state that exists today. He also highlights the similarities between the belief of religion and that of the state. Believe in God because we say so, do what the police say because we say so. Don’t question the actions of God, don’t question the government or its agents. If people would end these beliefs that a shiny badges and costumes grant extra rights, then “unnecessary shootings” would be reduced. Mostly because people would no longer tolerate the unnecessary actions of police.

I find some irony that Graham concludes his post with, “The Bible says to submit to your leaders and those in authority.” Really? Well, let’s be frank, Jesus obeyed authority and they – the Roman Police – nailed him to a cross. Are you sure this is the advice you want to follow? I know that’s not the path I’d like to take. How about you?