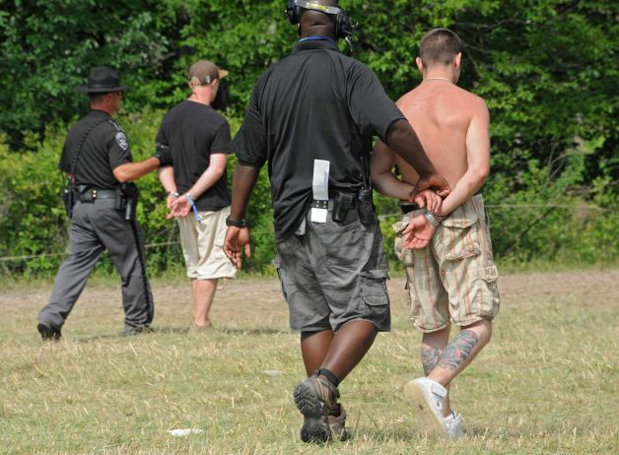 Dozens of officers, drug sniffing dogs, a multitude of checkpoints, searches, and a Judge on-site pretty much sums up 2014’s “The Hudson Project” music festival that occurred last summer. Located in Saugerties, NY- during the weekend of July 11-13, “ The Hudson Project ” was simply just an exercise of the police state.  Sporting about 16,000 patrons, MCP Presents (the promoters who hosted the event) – put on a mid-sized music festival that was meant to replace “Camp Bisco,” who had decided to skip the 2014 festival season.  Now, “The Hudson Project” is unlikely to return in 2015 after the mound of complaints and due to the fact of the festival ending one day early, because of weather (and over-protective officials).

Little to no warning was given to festival goers of the police presence arriving that late Thursday night.  Rumors of dogs and a high amount of police in the area fluttered through social media.  There would be three checkpoints – One car search, one bag search, and one persons’ search required to enter the venue.  Paranoia grew further once the arrests started coming in, and there was talk about surveillance cameras littering the festival grounds.  Talks of hidden cop cars pulling people over for “obstruction in the rear view mirror” and having “license plate covers”, became a very scary reality for many.  Entering “The Hudson Project” became nothing short of a sting operation.

Those who survived the gate were soon greeted by a muddy campground with cameras snooping on patrons every move.  Undercover officers in plain clothes could be spotted walking through the campgrounds and busting kids for whatever they could.

I spoke with a security employee, he said –

As the weekend marched on, the arrests grew.  A judge was on-site and people were getting lined up and booked by the dozens. 42 arrests reportedly were made in total and the kids names posted online.  Although it is very unclear how many were actually arrested as one local news website posted a much higher number of 151 arrests, and even more charged and violations given.  It’s very clear that both the police and MCP wanted to hide the real number from the public.

“I was put in cuffs and thrown in the back of a cruiser and brought a mile to the judge on site…  I was never read my rights and saw the judge that day.  I was given the option to either plead not guilty and have to return to court or plead guilty and be released back in the festival…  I pled guilty and was told to give all the money I had on me which was about $150, I was released and walked back to the festival… I never went to court after that and simply received a letter in the mail stating my charges.” When Sunday rolled around, so did the bad weather and the news that the music would be delayed until further notice.  Many campers were told to return to their cars to wait out the weather, but most stayed put waiting for the moment for the music to return.  But soon, the news came that the music wasn’t going to return and that the festival was canceled.  Panic and anger began to set in and patrons were told to go to their cars and go home. But with the rain pouring down and the sense of intoxication heavy, MCP later announced that you could stay the night if you must.  The ex-Woodstock grounds soon became a very dirty and wet apocalyptic scene.

To add insult to injury there was a DUI checkpoint stationed right outside the festival pulling people over left and right with hidden cop cars for miles.  In addition, many peoples cars were stuck in the mud and couldn’t get out for as long as days. All the food vendors were closed and soon the Red Cross had to show up. They gave people a bagged lunch with a peanut butter and jelly sandwich in it, as well as opening a shelter.

At the end of the day, most who got out of there vowed to never return.  From the beginning, MCP showed that they did not give any care for their patrons and their safety, as well as working hand in hand with the NYS Police.  The amount of money earned in fines by The State of New York, the town of Saugerties, and the legal and emotional harm done to the young festival goers will remain unknown, but it will not be forgotten.  Unfortunately, most news organizations touched very little on the atrocities of that fateful weekend due to either their profiting from the festival, or their relationship with MCP.

What lesson can be learned from all of this?  That New York is a bad place to have a large festival – Yes.  But more importantly, that event organizers like MCP need to look out for their patrons and think about how many young lives were greatly affected because of their poor organization and co-operation with the police.  This year “The Hudson Project” isn’t likely to happen, but will probably return in 2016.  Have MCP and the NYS Police learned anything from all this?  We will will have to just wait and see.

If you were arrested or have any thoughts on “The Hudson Project” please feel free to email me at tyler@copblock.org or post in the comments section.