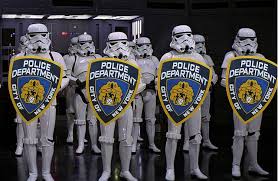 An investigation has revealed the two NYPD officers responsible for making questionable edits (trolling) to the Wikipedia entry for Eric Garner, Sean Bell and Amadou Diallo. The two officers, who have been identified but not publicly named, used NYPD computers to make changes and amendments to the article. The changes were made in a manner that attempts to provide justification for the events that led to the murders of citizens by NYPD officers. The two officers have been admonished, but will not face consequences.

According to NYPD Commissioner Bill Bratton: “They have been identified, I do not anticipate any punishment. We are in the process of reviewing our social media policies. Wikipedia would be one where right now we don’t have a policy specific to accessing that site.”

Mayor de Blasio stressed that what officers do on their own time is their own business and is protected under the first amendment. While this may be so, these activities seems to indicate a strong disinclination for a genuine attempt at objectivity required by public servants. They also continue to suggest cultural issues among law enforcement agencies. However, these edits were made using NYPD computers while on the clock, meaning that the cost of these officer’s personal agendas and commitment to falsehood was footed by taxpayers. We are assured by de Blasio, however, that these activities were not authorized. “It’s a well known city policy that people are not supposed to do personal activities on city computers.”

Well known perhaps, but apparently, unenforced. Which seems ironic for an enforcement agency, right? And is it just me, or aren’t public servants expected to uphold the values and ethics required by the public and their service to them? Can authoritarians who cannot maintain their own personal character serve the interests of those rely on and believe in those standards? Why isn’t common sense behavior and decency in the job description?

Having standards for police is not a character flaw; but policing without them, or attempting to validate, justify and excuse them, certainly is.