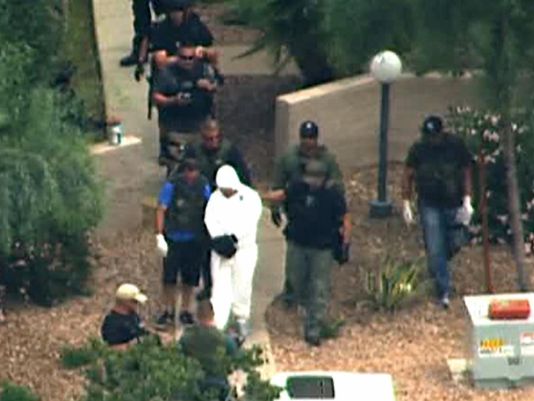 I’m sure you’ve heard about the shootings in Arizona today (March 18th), but for those who haven’t, let me recap. Allegedly, 41 year old Ryan Giroux went on a shooting spree, leaving 1 dead and 5 others injured. There are no known motives for his action at this time, but this post isn’t about Ryan’s motives. This post is about how effectively the police apprehended him, without terrorizing the neighborhood  (unlike the Boston and LA Police).

The first report of a shooting came in around 8:30 am and by 1 pm – only 4.5 hours later – Ryan was in custody. Let me remind you that he shot 6 people – killing one, there were multiple crime scenes and he was holed up in a vacant apartment complex. It wasn’t just a simple shooting in one location, there were moving parts here, it was complex.

Within a hour or so of the shooting – at least publicly – the police had Ryan’s name, address, prison record and (presumably) more. They cordoned off a grid that they were highly confident the suspect was in, gathered their personnel and moved in. According to reports from several news outlets, Ryan was tased and transported to the hospital, after being taken into custody. Yet, he’s alive and the police didn’t abuse him or the whole town of Mesa in order to accomplish all that.

For this I give the “thin blue line” gang a moment of praise. Well done LEO’s, for once you’ve shown that you can actually work a crime with a victim in a timely manner. Congratulations, click here for your prize (active LEO’s only).

Now, I said moment of praise because that’s what I meant – a moment – and that sh*t has passed. Before I lose all the readers here by being a copsucker, (term given to people who love the police state) I’d like to ask an important question to all the LEO’s I praised, “Why the f*ck can’t you do this to the cops that murder people too?” Seriously? Within 5 hours, the Mesa Police can not only tell the media all there is to know about Ryan Giroux, but they can corner him off and arrest him, as well. Except, when the killer is a cop, then you don’t get that information or results for weeks, months or EVER. Why is that?

Some might say that answer is obvious, it’s the double standard that exists in policing today that is to blame. Others may disagree but honestly, what would your reaction be if Ryan was escorted home, put on paid vacation while his best friends investigated the case, and the victims’ families are stalked by Ryan’s co-workers? Hopefully you’d be outraged that the police would let someone who clearly committed aggression against others go with such ease. Yet, everyone of those hyperlinks is to a story where a cop has received such treatment (side note; all of those cops killed people) and if that’s not a double standard I don’t know what is?

For example, this week Asa Johnson, PoliceStateDaily.com editor and new contributor to CopBlock.org, posted a video showing two cops who shot and killed a man with mental health issues. Their victim held a standard screw driver and merely walked towards them. Of course the officers will say they feared for their lives, but I’m sure Ryan could find some lame excuse to justify his actions too. That doesn’t make it right. It most certainly wouldn’t shield Ryan from the process of the justice system, but it does for cops. What I’d like to see is the Mesa Police round these two scumbags up in the same amount of time as it took them to snag Ryan. Yet, I’m not going to hold my breathe and I suggest you shouldn’t, either. This proves that the police are more than capable of working crimes with actual victims, when they want to, and can even work together with others in the community to achieve this. So, why don’t we see this happen more often? The answer is simple, crimes like this are rare. The majority of the time, police are merely rolling around collecting (fake) revenue, enforcing bad laws and furthering the fear mongering that provides an illusion that government is a necessary evil in a modern world. This is what the Ryan Giroux shooting can teach us about police.