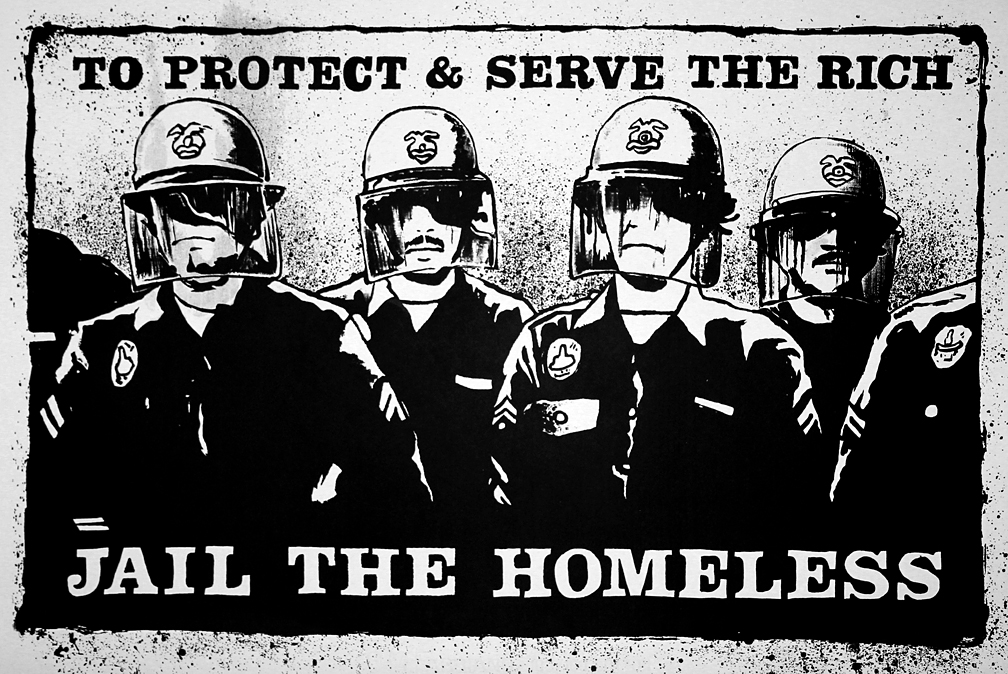 *This is a repost, sent to CopBlock.org’s Submission tab, from NakedRoots.net* Yesterday, 16 March, at about 11pm, two Clearlake police officers kicked down the doors of the Promise Center Church without a warrant and threatened the 15 people sleeping in the church to vacate the premise by morning.

The Promise Center is a church that holds two church services during the week – Tuesday nights and Saturday mornings. Once the services are over the chairs are stacked up and the cots are laid out. Then, the church turns into an overnight warming center during the freezing winter nights for the homeless that would other wise be sleeping outside. Many also use the center as a recovery house, seeking shelter from the grips of drugs and alcohol.

Pastor Kelly Kennemer explained, “God put it on my heart that the church wasn’t to be left unused for most of the week and to open the facility to those who need it most.” And so, without permits or code adherence, the doors had been opened since November 2014. An average of 18 people slept inside the sanctuary every night.

When I asked what they were going to do now after the bust, one of the witnesses responded, “Where is there to go? Do they [the police] want us back on the streets, slinging drugs, or going back to the dope houses? They just closed down the only other option we had.” One of tragic realities of Clearlake is the estimated hundreds of dope houses that infest the county like malignant cells eating up the destitute.

Lake County is California’s only county with neither a psychiatric facility nor a homeless shelter. The council made it clear that it isn’t very high priority right now or even in the near future, as stated in the Record Bee’s article, ‘Shelter finds no home in county’.

Their devastated faces express the frustrating cyclical oppression that hundreds if not thousands of people are going through in Clearlake. The unfortunate reality is that the necessary steps out of homelessness and into stable habitation simply do not exist – shelter, transportation, transitional housing, education, and occupation. When they make one step, another falls from beneath them, and they tumble back to where they started, homeless and hopeless.

What are the answers for Clearlake’s ever increasing homeless problem? Ignoring that the problem even exists won’t solve it. Pretending that it’s not a high priority won’t help. Neglect, knowing what needs to be done and not doing it, is worse than having never been informed in the first place. Yesterday, the City has taken an extra step backwards, busting (of all things) a church trying to help. The City isn’t willing to offer relief, but is apparently willing to shut down those who try. In a county with more confusions than solutions, with more opinions than volunteers, where is the hope?

Rather than scattering, the core group of refuges banded together. One of them, a mother with two kids, used the rest of her cash to check out a hotel room for the week and selflessly opened her doors to several others. The room is tight, a queen size bed with two feet of walking space on all sides. Others are cramming into a small house in town. Even though they are left with practically nothing, they came together and shared what little they have left.

Tuesday night’s service was not held at the Promise Center this week. Instead, the group of 12 core members, all homeless, congregated at the place where the ministry first began 9 months earlier – Redbud Park. They gathered around a few park benches, wrapping one another in layers of blankets to eat a warm potluck meal and fellowship. With the magnificent Volcano Konocti and glimmering Clear Lake in the backdrop, Pastor Kelly shared a message from the Word of God to the congregation. The message – perseverance.