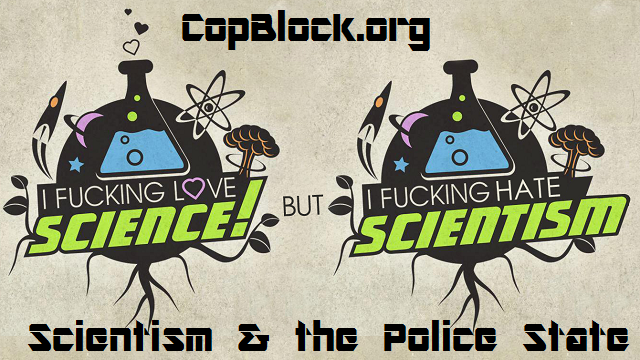 Scientism is another contentious topic that I think can shed some light on the emergence of the police state. It is one of the many angles from which we can explore the problem of police corruption, abuse and violence in order to gather a bigger picture of issues so complex that they cannot be explained without deconstructing our entire social fabric. Unfortunately, a discussion of scientism and its problems almost always degenerates into misleading narratives constructed from opposition factors within a false dichotomy. Scientism is the extremely unscientific worldview which claims that only science can provide meaningful answers to inquiries about nature, reality and existence. Its adherents attempt to stretch scientific methods and findings beyond their realm of epistemological relevancy in order to validate their own beliefs, convince others or to replace reason itself with a dogmatic ideology to further their agenda.

While the scientific method is itself a brilliant and immensely useful tool for answering many types of questions, even science or empiricism cannot be used to validate claims of its methodological superiority. The scientific method is predicated on philosophical suppositions and logical systems that precede formal science both historically and and intellectually. Order of operations. Non-empirical methods of discovery such as art and spirituality are similarly branches of philosophical inquiry. The claim that any single branch of philosophy provides the entirety of truth, whether it be science or religion or any other, betrays a fundamental ignorance of the greatest knowledge of all. Absolute objective truth is not accessible to humans. Truth is an ever-evolving journey that seeks new evidence, questions and answers, and good answers are the kind which that are sensible and polite enough to concede when they have been replaced by better ones.

The criticism of scientism is not the same as being ‘anti-science’. In fact, it is in keeping with the scientific method and spirit that we remain vigilant that such a powerful tool not become sullied and weighed down by dogma or allowed to be abused by the select few for maligned purposes. Already my explanation of scientism and pre-emptive attempts to quell the automated reactions from true believers of all ideologies feels too long and apologetic. Before you dismiss the problem of Scientism outright without trying to discover its complicity in the police state, please take some time to read the links scattered throughout this post, so that you might possibly benefit from lines of inquiry which you may not yet fully understand.

So, how does scientism contribute to the police state, then? As an ideology, scientism often suggests some basic axioms which creep into our thinking of all things. Since scientism tries to bend the scientific method into intellectual authoritarianism, it has become a cultural reinforcement for the dangerous and untenable idea of the superiority of systems over individuals. Because science requires interactions between scientists and a larger scientific community, it often utilizes systemic or institutionalized paradigms. And because these paradigms have shown some pragmatic success in helping to create human technologies and knowledge which benefits us, the adherents of scientism often come to believe that human civilization itself requires a similar method of organization. While this is arguably and demonstrably untrue, the scientismist projects the successes of empiricism outside of its realm into the study of nature and onto human societies. The scientismist often believes that the same formally rigid structures which brought about scientific knowledge is applicable to all phenomena.

The police state is itself one of those formal rigid structures. But because human beings exercise free will, the structure is inadequate to respond to a subject which does not act predictably. Dealing with human beings requires that we consider every human as an individual and not just some statistical aggregate. Yet because our policing institutions have begun to incorrectly model themselves after empirical disciplines, individuals are treated as categorical subjects. Police attempt to circumvent the difficult job of ascertaining the entire situation and particulars of an individual by categorizing them. This makes police work easier and reduces risks to law enforcement officers, while at the same time creating a corrupt and abusive power structure which relies on profiling and criminal assumptions that often target the innocent. Scientism has reinforced our ideology that only strict methods are useful and this ideology has become a building block of the modern police state. Scientism also relates to problems of propaganda, even when it is often unintentional. In the last few decades we have seen numerous television shows, movies and other media presentations which highlight forensic police work. In truth, forensics is only part of building a legal criminal case. The best of forensic evidence will not hold any weight in an honorable court without some kind of motive accompanying it. Yet we have come to see these quirky scientists who work behind the scenes as the central mediator of justice in our systems. Because their weapon of choice is the scientific method, and because we have perverted method into ideology, we assume that science has provided reasonable checks and balances in our legal system to prevent abuse and corruption. This simply is not true. While law enforcement contains an element of science, it is itself not scientific. When we credit it with the accuracy of the scientific method, we open ourselves up to a blind ignorance of how both policing and science work. Scientism has contributed to some other false assumptions that have become pandemic in our culture. One of these assumptions is how we have distorted the concept of ‘proof’. Proof, as it has come to be used in most discussions, is an irrational ideology. The only disciplines in which the actual concept of proof applies are closed axiomatic systems, such as logic and mathematics, where there can be no new information. In human activities, investigations and all throughout nature there is always an abundance of new information which could change what we know about a phenomenon.

The beauty of science is that its claims are made to be falsifiable, which means that the goal is to keep looking for deeper truth and not settle on a particular hypothesis or theory as the final answer. Yet somehow the cultural ideology of scientism has elevated the concept of proof to mean some kind of absolute and final objective truth. Such things do not exist in science or nature. Truth is a continuous journey of improving our knowledge. By distorting the concept of proof as has happened via scientism, we have erroneously come to believe that we have the ability to make final answers to all questions. Aside from being illogical and false, this is highly unscientific.

And yet the law enforcement system has come to rely on this faulty concept in many ways. We are asked by the police state to provide proof or told that proof is not on our side. Yet this concept of proof being appealed to does not apply to law enforcement or its methods. By usurping this meaningless concept, police and the cultural ideologies surrounding them have come to a sort of religious faith in the righteousness of law enforcement. This faith causes people to not question the police and their activities; which inevitably leads to a sort of authority in which abuse and corruption can go unnoticed and unchecked. However, it is within the legal system that we are able to find an example of the slipperiness of ‘proof.’ ‘Proven beyond a reasonable doubt,’ is a statement that verifies the subjectivity of proof. A legal system which tries to objectify scientistic concepts for its own purposes, while admitting the impossibility of objectivity, is one that bears much closer inspection.

Many other concepts which are either used by or as justification for the police state are also social distortions. For instance, we are often given statistical information as a way of justifying the follies of police from profiling to department expansions. The most common way this is done is by using statistics as prediction models. Statistical analysis and its prediction models are not even very scientific. The number of times an outcome has or has not happened in the past has no influence whatsoever on present probabilities. A probability is determined by the number of possible outcomes, not on statistical inference of prior outcomes. Once again, nature is not a closed system, so past information does not illustrate or influence a current phenomena. These statistical misconceptions are themselves highly illogical and incompatible with empiricism, and yet law enforcement at every level constantly uses these statistics to create fear and justify its activities, even to the exception of rational and ethical considerations.

Yet another false construct from scientistic thinking is that of predeterminism, which is the idea that external forces fate us to preordained thoughts and behaviors. Predeterminism was the basis of the Protestant movement and was largely considered a merely religious concept until twentieth century scientistic world views like physicalism, naturalism and materialism began to become influential in public spheres. From the very onset, predeterminism was used by law enforcement as method of ‘preventing crime’ by acting pre-emptively against those whose biological or cultural make-up allegedly put them at a higher than average risk for criminal behavior. In the late nineteenth-century such fallacious thinking was used to illustrate that phrenology could predict the emergence of criminals. Phrenology is the (thankfully) defunct idea that the shape of our skulls can be used to determine deep truths about individual human beings. While phrenology is no longer practiced by police, similar tactics are still used, even when they are officially unallowed. Profiling, stereotyping and the use of race and class to determine possible criminality are all widespread practices. Even when such practices are deemed institutionally impermissible, they still affect the thinking of individual officers who use pre- deterministic shortcuts in everyday policing. The unfortunate ideology of predeterminism is endemic to both Protestantism and Scientism. The scientistic and philosophical justifications for corruption and abuse by police are part of the problem of scientism.

The problem of scientism contributes to a grand oversimplification in our thinking. It provides shortcut rationalities and other inanities that bleed into our larger cultural ideologies. Scientism is a force which serves to create anti-intellectual paradigms in which we ignore larger truths in deference to a single method of knowing and/or understanding our world. By closing off our thinking and narrowing it into blind faith, we lose track of the bigger picture of our existence. This leads us to default on our ethical, moral and other subjective forms of knowledge which would otherwise provide checks and balances on a legal system run amok. Scientism is a problem for humanity. It has become the new religion of the state. It is a problem that has penetrated every corner of our social, economic and political existence. It is a contributing factor in the unreasonable thinking by which our police state is being constructed. One need not be anti-science to see the problem. In fact, those who truly appreciate science and its successes and possibilities should be vigilant in protecting the method from being perverted into irrational and dogmatic ideology. Not just for the sake of intellectual vigor and truth, but because scientism inadvertently creates real-world problems, like the police state with its growing corruption and abuse.