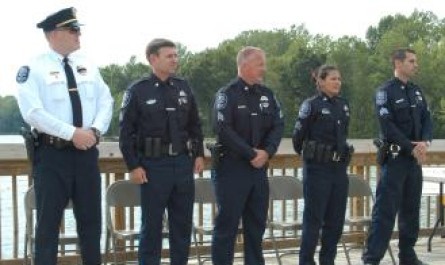 Nestled amongst the suburban satellite cities of Charlotte, NC, the community of Gastonia is ranked amongst the 13 most populous cities in the state.

A plague of job loss, coupled with an almost 10 percent population increase over the last 12 years, has meant an increase in crime for the city, with over 3 percent of the citizenry now being successfully convicted for property crimes each year.

Perhaps this is why local police have become particularly reactionary lately.

In the third questionable police shooting in one month, a witnesses is contradicting police statements.

After 52-year-old veteran William Dean Poole was shot by Gastonia police on March 16, officials claimed he had opened fire on the officers. A neighbor says however, that Poole never pulled his gun on the cops.

Officers were called to Poole’s residence at 130 Wedowee Lane, south of Gastonia, by the National Veteran’s Hotline, which the man had called expressing a plan to commit suicide.

The caller told the operator Poole had mentioned owning guns, had talked about “taking out others before himself,” but had urged the hotline not to send police, saying it “would not end well.”

Officers said they arrived to find Poole sitting on his riding lawn mower in his front yard. After police identified themselves and began approaching, the officers claim he pulled out a gun and opened fire. Four unidentified officers shot back, killing the man.

J.C. McDowell who lives across the street from Poole is telling another story, however. He says after officers approached Poole, they ordered him to put his hands up.

McDowell says he could see Poole start to pull his arms up, and that’s when they fired. “I just can’t get that image out of my head,” he said.

McDowell says he never saw Poole reach for his gun or fire it at officers.

“They did not have to shoot,” he said. “They come out here with guns pointing, looking like they want to kill everybody. That would startle anybody. It startled that old man.”

Poole lived with his wife. She was home at the time.

Gastonia Police shot a mother of two after she called them for help removing unwanted guests from her home, on February 17.

43-year-old Betty Sexton died at a local hospital after Officer LaDoniqua Neely shot her in the chest.

“My sister would not hurt anyone,” Debra Kennedy said.

Kennedy says her sister, Sexton, called 911 so police could help her remove two unwanted guests from the home she shared with her boyfriend.

At one point, Sexton grabbed a musket gun from the closet, police say.

“An old musket gun,” Kennedy said. “It has powder that goes down in it, and you got to use a rod down in it. Even pellets have to put down in it.”

Kennedy says her sister’s boyfriend told her the gun was not loaded, and that when officers told the mother of two to put it down, she began to comply.

“That officer still shot my sister dead in the chest,” said Kennedy. “All she wanted was someone removed from her house.”

Another Veteran in Welfare-Check Gone Wrong

Another elderly war veteran was shot and killed by a Gastonia police officer on February 7, after the officer forcibly broke into his home to preform a welfare check.

Police were asked for a welfare check on 74-year-old James Howard Allen, at around 10 p.m. by Allen’s relatives. Allen had just underwent surgery and the family was concerned for his well-being, police say.

Police say an officer went to Allen’s home on Mary Avenue around 10:20 p.m., and got no answer at the door. At around 11 p.m., police called area hospitals, but didn’t find Allen. So, an officer returned to his home.

Allen’s car was in the driveway and neighbors reported seeing Allen the previous day, police say.

After officers contacted a supervisor, the decision was made to enter Allen’s home through the back door. Police called Gastonia Fire and EMS at 11:30 to request additional help breaking in.

After forcibly entering the residence, police say Officer Josh Lefevers announced his presence before being confronted by Allen, who had a gun.

“He was challenged to lay the gun down,” Gastonia Police Chief Robert Helton said. “The gun was pointed in the direction of the officers, and a shot was fired that fatally wounded him.”

“Somebody kicks your door in, comes in your house, your first instinct is defend yourself,” longtime family friend Otis Thompson said. “I’m kind of shocked. I can’t believe something like this could have happened.”

A State Bureau of Investigation review of each incident has been launched as is practice with every police involved killing in North Carolina. Police and state officials have released few details in each case, refusing to comment on ‘ongoing investigations.’

Officer Lefevers has been placed on administrative leave. Best we can tell Officer LaDoniqua Neely remains on duty. The officers involved in the William Dean Poole shooting remain unidentified.