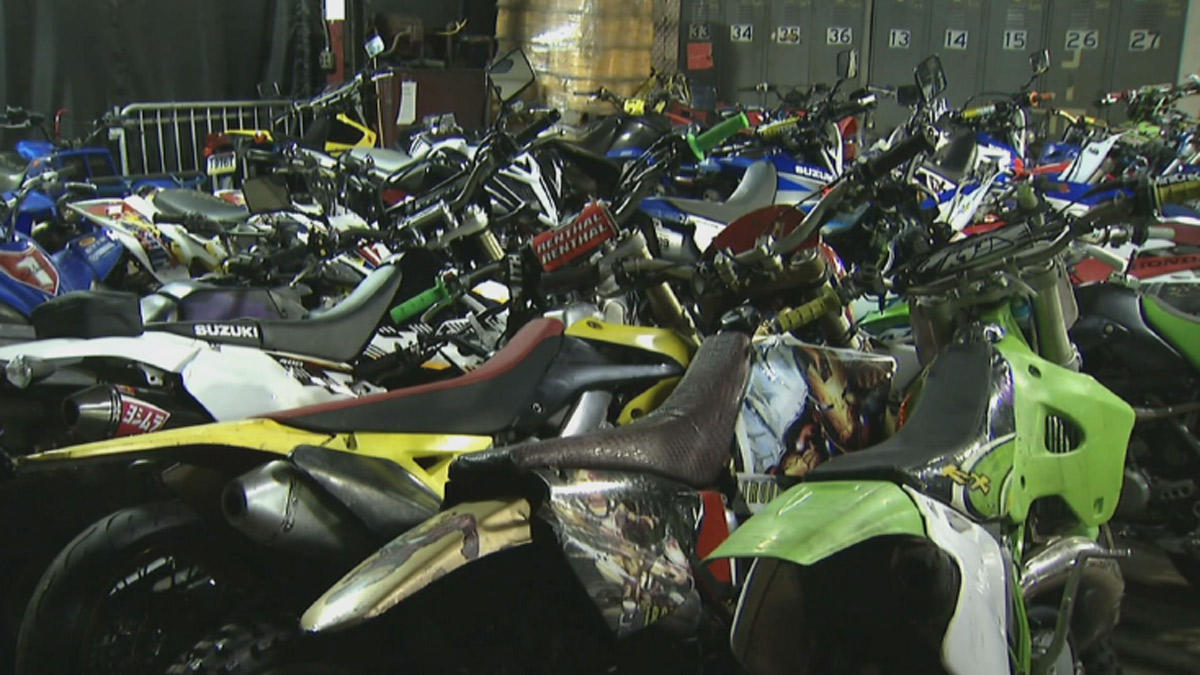 With air support, Philadelphia Police seized at least 68 ATVs and dirt bikes, and arrested four people Saturday, after riders took to the streets in a show of support for local hip hop entertainer Meek Mill.

Police say they noticed the call for a ‘ride out’ in honor of the 27-year-old rapper while monitoring social media feeds. Meek grew up in Philadelphia and was active in the dirt bike riding community.

His ‘Welcome Back’ concert began at 8 p.m. Saturday at the Wells Fargo Center, but first, fans had planned to show their support for the local star by mounting their dirt bikes and ‘riding out’ in solidarity.

Police say they seized the vehicles without incident. They confiscated 68 dirt bikes and ATVs as well as three trucks. Two of the trucks were transporting stolen ATVs and dirt bikes, police claim.

Police also say they made four arrests: one for a gun, one for drugs, and two for stolen bikes. Police say the majority of the riders came from New York and Maryland and were unaware there was a city law prohibiting riding dirt bikes in the street.

One man, whose vehicle was taken, told local reporters, “We all heard about it from the same place, all over the media where everybody else heard it. No one actually knew it was illegal. We were just there to show a cause for children.”

Dirt bikes and ATVs have been deemed “illegal on city streets” by local lawmakers, but Philadelphia Police department policy prohibits officers from chasing vehicles over moving violations alone, which makes the tactics used leading up to the incident questionable.

“[Dirt bikes are] extremely dangerous,” Philadelphia Police Chief Inspector Dennis Wilson said. “[They] cause auto accidents. There’s always the possibility that we have individuals on the sidewalk that are gonna be hit by these dirt bikes.”

“When we catch you, we’re gonna seize them,” Wilson continued. “You’re not gonna be allowed to get them back.”

This reporter was able to get in touch with one ‘ride out’ participant who has been outspoken on social media since the incident but has requested to remain anonymous.

“It was absolutely ridiculous,” the man said. “I have a license, tags and insurance [for my bike]. I’m from out of state and was not familiar with local laws, but if you are licensed, tagged, and insured, it shouldn’t matter. [Police] just wanted our bikes. I’m sure they will just be auctioned off or something.”

Police have used recent dangerous dirt bike scenes in the city to justify their actions, citing an incident in October, in which about 100 dirt bike and ATV riders weaved in and out of traffic while racing from one end of Broad Street to the other.