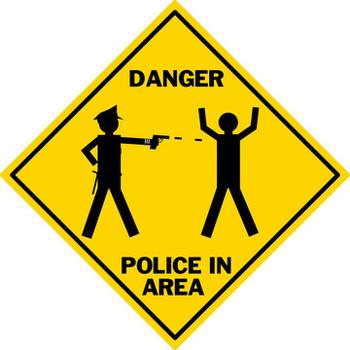 Last week I shared a story about my own personal experience with a semi-retired LEO whose distrust for his colleagues had become disturbing to him. It was disturbing to me as well. There have always been bad cops, as well as entirely corrupt departments. Yet this went beyond corruption into a deeply rooted culture of disregard for humanity and compulsive behavior, something that seems to be becoming widespread and institutionalized and integrated into our social and moral structures. Since I wrote that article I remembered another part of the story that highlights the compulsiveness or competitive ambition that has become endemic to law enforcement. The semi-retired LEO told me about an officer on the force who wrote five hundred tickets in a single year for rear window brake lights being out. This means that almost twice a day this officer went looking for somebody who had that unnecessary third brake light inoperable, so that he could write them a ticket. The officer was known to brag for his Herculean efforts of authoritarian horseplay and revenue generating. It was so ridiculous that even his fellow officers teased about it behind his back, secretly giving him a nickname. Because the type of vehicle he was generally able to pick this problem out in was a mini-van or other family sized vehicle, he became known among his colleagues as the ‘Mom-Mobile Enforcer.’ Compulsiveness indeed.

As a part of last weeks article, I asked for readers to share their own stories in which police had become mistrustful of police. So far I have only received two responses, but I would love share more in future editions of this topic. If you have a story you think fits, please share it with me at:

The first submission comes from Michael Blott in Washington, D.C. Michael shared with me the following anecdote about a close friend of his:

“She wanted to follow her father’s footsteps who was a state trooper and go into law enforcement. Mostly because of the economic opportunities and early retirement. She entered the academy with high hopes and left about halfway through. She said there was a constant drilling of us versus them and the most important thing was the LEO welfare above all things.” She took her concerns to her father, who was unable to make her feel any better about it.

“Her father understood and told stories of taking his people under him and set them straight from time to time but was not under any delusions that it stuck in all of them. He was doing what he could until retirement.”

Michael told me that she would often ask her father about stories involving police corruption she saw in the news, to which he most often did not have the heart to even respond.

On one hand, we may be better off with more people like this young woman behind a badge. Yet this young woman saw something that is hard for most people to accept. The system she was about to enter was itself corrupt. The job requirements and training were not meant to create ‘good’ cops, but rather ones who would follow the strictures of training and orders. Regardless if an individual is a good person or wishes to be a ‘good cop,’ the system is working against them, slowly weeding such individuals out. I hope that more individuals like this who feel called towards public service will not abandon their will, but will use it to create new alternatives to community safety to replace the increasingly unwelcome paradigm of traditional law enforcement. The next story comes from a Washington State activist group ‘Peaceful Streets Lewis County‘ who filmed the following video with Centralia, WA police officer C. Buster. In the video, Officer Buster talks openly with a James Madison, from PSLC, about police issues. Buster seems like a genuinely great guy who understands many of the issues regarding government, rights and police abuse. If you don’t find yourself doing an internal ‘FUCK YEAH’ when he asks the question, “Where’s the honor in that?” then rewatch it until you do. I commend Officer Buster for his willingness not just to remain free of the ideological dogma which many police fundamentalists grasp religiously to, but to speak openly to concerned citizens about these issues.

There are good people who put on a badge. Yet they are increasingly alienated by the problems inherent in the totality of the modern legal system. It is these people whose stories can provide us some of the most poignant insight into what is happening. Those who have watched the system worsen and decay from within will have the most credibility for those who still refuse to believe what is happening because it is too horrible to live with. We can deny ourselves any truth in the interest of avoiding cognitive dissonance, and often do so without realizing it. Changing that will require countless perspectives. So, again, if you have a story to share about LEO’s who have developed mistrust for their colleagues and/or the system they work within, your story may be the one that helps somebody to shake off those delusional safety blankets and join us in creating a better society with individual liberty, prosperity and humane and sustainable community safety.