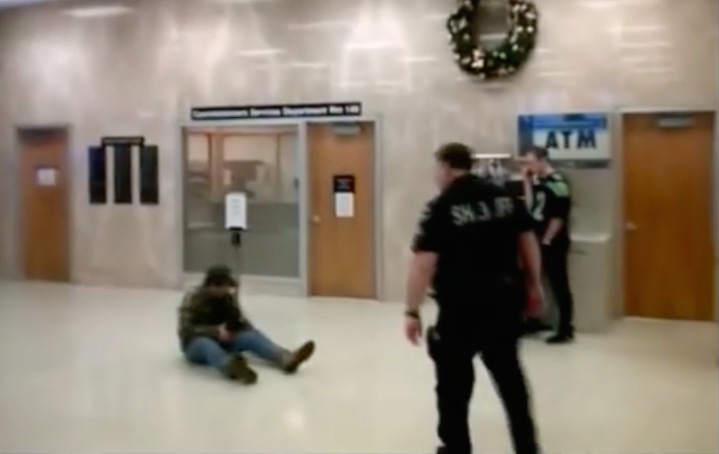 On the 26th of November, 2014, Brian Todd Green accompanied a friend to a routine parking ticket hearing at the County/City Building in Tacoma. While at a security checkpoint, his friend became suspicious of the security procedures. It appears that the man just has a genuine concern for the integrity of his paperwork and doesn’t wish to have it thoughtlessly rifled through without his assistance. Although this is perhaps an unusual request, it does not seem out of line. Security then calls a Sheriff’s Department deputy to the scene. If the man’s skepticism about the safety of his property seems paranoid, the deputy soon justifies this paranoia with some outrageous behavior.

As the deputy decides to come around and enter the security checkpoint area to evict Brian’s companion, he walks by Brian who is asking him what laws are currently being enforced. The officers response is to shove him across the room like the bad guy jock stereotype in some eighties teen comedy movie. When Mr. Green begins to assert his rights and demand an explanation for this behavior he is told that he is being arrested for obstructing justice and is promptly cuffed and escorted away. The details, in the video below, are even more disturbing than my brief explanation.

Now read a copy of the officers affidavit below and note the major discrepancies between what happened and what is reported, of which there are many. Let me tell you what I see here. I see a guy at work. Who doesn’t particularly like people, or his job or the world he lives in. Honestly, this is how most of us feel at work. At some point the fatigue of conforming to the necessities of the modern world causes us all to be petty and varying degrees of abusive at work. Whether frustration causes you to lash out at an unruly customer who is making your shift more difficult or to kick a piece of equipment whose folly is causing your job to be that much more dreadful; we all act out from time to time. Modern life has it’s own existential difficulties and often forces us into dreadful and toxic emotions that have to be relieved somewhere. Law enforcement jobs are no different in that way. The difference is, most of us don’t get to toss some guy across a room, have him arrested and cursed with a record that can destroy life opportunities. Cops are not much different than the rest of us in their unconscious existential angst driving them to breaking points. They are just given inordinate amounts of power, too much robotic training and can ruin, destroy or take lives in their tantrums. Underneath every disgusting and abusive law enforcement officer like this is another human being trapped by an even greater tyranny, which employs them. That employment gives them extra rights, protections and benefits; but it does nothing to alleviate the meaninglessness of the maligned purposes that they serve. If vileness is it’s own punishment, then law enforcement are their own greatest enemy.

Mr. Green is currently fighting his charges. I have scheduled an interview with him and will be addressing his case in another upcoming article. While the injustice perpetrated against him is nowhere near some of the more extreme abuse we are seeing every day, the little abuses scar our s ocial fabric, making criminals and suspects of all of us instead of neighbors and partners in peace. And every time an officer gets away with a trespass such as this they become emboldened in their brutality, so it is important that we work to get officers showing early warning signs of criminal behavior off the streets before somebody gets killed because they are having a bad day at work.

Thank you to Peaceful Streets Lewis County for sharing this story. Please stay tuned for more information about Brian’s case and what you can do to help.