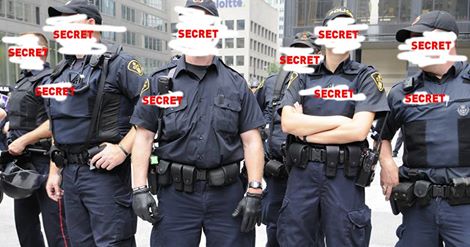 Do you know about SB 1445? The mainstream media isn’t talking about it – all that much – but it’s something you may want to know about. SB 1445 is a bill that would prevent the names of officers involved in shootings (or any investigation really) from being released to the public. According to the Phoenix New Times:

SB 1445 passed in the House Wednesday afternoon. The vote was 44 to 13, with three members not voting. (View the full voting breakdown here) It will now advance to Governor Doug Ducey’s office.

Community leaders and members of the ACLU gathered on the capitol lawn this morning to speak out against SB 1445, a controversial bill that “limits the release of the name of a peace officer who is involved in a use of deadly physical force incident for 60 days.”

It’s scheduled to be read for the third time this afternoon in the House, where it’s expected to pass and move on to the Governor’s office.

Community member Channel Powe said the bill is “a black eye on Arizona.” She urged lawmakers to vote against this “immoral and unconstitutional” measure that “limits transparency and promotes discrimination.”

The article details officers who claim SB 1445 is more of a “cooling” off period for people to “get all the facts” and to avoid a “whimsical mob” from “roaming the streets looking for blood.” Really? When was the last time an officer was dragged out of his home for something he did in the course of duty? Has there ever been a time an officer has faced a public mob? Furthermore, if anyone promotes a mob mentality it’s most certainly the police. There are countless examples of police officers swarming onto a scene and immediately using force without any idea as to why.

So why are the officers so concerned about something that’s never, or very, very rarely happens? Are they starting to realize that people might be losing faith in their service? Do they envision more aggressive police actions that might lead to people taking their own actions? What is the need for a bill like this if there are rarely any threats to officers? Officers kill thousands of people each year and have no problems releasing anyone else’s name. So why the fuss when it’s one of their own?

I guess when you have a job that requires you to do things you wouldn’t normally do, without a badge, uniform and gun, then you might want a little protection – or guarantee – that you won’t be sold down the river for doing such things. SB 1445 seems more about keeping the moral high within the LEO community than any actual concern for the safety of the police officer.

What are your thoughts? How soon should a killer cops name be released to the public? If you’d like to write up an overview of your thoughts on this matter, we’d like to hear it, visit our Submission Tab to get started.