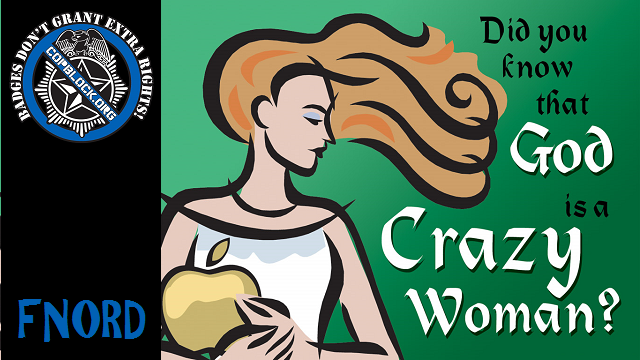 In the early 1960’s, as the pendulum of reigning counterculture swung from the beats to the hippies, the modern liberal movement ushered in by then youthful baby boomers began to take form. While the right began to be associated by an attachment to post-WWII political, economic and social values; the left began the march towards a progressive statist utopia inspired by misconceptions of FDR updated for the Age of Aquarius. Somewhere in between a small group of underground libertarian anarchists began work on a seminal piece of 20th century art and philosophy- ‘The Principia Discordia‘.

The Principia Discordia was to be the sacred text of a seemingly satirical religion called ‘Discordianism‘ based on the Greek mythological figure Eris, Goddess of Chaos, known as Discord by the Romans. It was the brainchild of Kerry Thornley and Greg Hill, as well as many other accomplices, including Robert Anton Wilson. While the book contains an acerbic wit full of surrealist twists and dada design that often feels like a precursor to Monty Python, there lies beneath a very poignant philosophical lesson. GP: Maybe you are just crazy.
M2: Indeed! But do not reject these teachings as false because I am crazy. The reason that I am crazy is because they are true.

The essence of Discordian philosophy is that chaos is the underlying principle of the universe. From that chaos conscious beings may create order. This suggests that chaos is not the opposite of order, but it’s prerequisite. The subatomic building blocks of consensual reality, as it were. However, not all order is intended in the spirit of creativity. A cantankerous old archetype named Greyface embodies what Discordians refer to as destructive order. Destructive order is order which seeks not to create harmony from chaos, but to harness chaos with order for the sake of power and control or out of mere existential confusion. When destructive order is imposed, the result is disorder. Disorder is not to be confused with chaos.

“The belief that “order is true” and disorder is false or somehow wrong, is the Aneristic Illusion. To say the same of disorder, is the ERISTIC ILLUSION.”

To Discordians, the dichotomy lies not between chaos and order, but between destruction and creativity. Raw primordial chaos is a creative medium from which any type of order may arise. Creative order, which is the sort of order suggested by advocates of voluntary association, emerges spontaneously out of need by the community. Even when dealing with the sort of unfortunate possibilities and social liabilities that emerge out of chaos. Destructive order is marked by the state and it’s misguided attempt to impose order through aggression until it’s eventual by-product, disorder, results from this philosophical confusion.

Discordianism essentially applies the laws of physics to human interactions. For every action there is an equal but opposite reaction. The laws of thermodynamics and entropy also correlate metaphorically to highlight the folly of intensified interactions between processes and phenomena in finite social systems. The growing police state is the product at an attempt to impose destructive order upon chaos. As this wrong-minded order grows, so too does the disorder it creates. Our current predicament is a feedback loop in which two sides of the destructive coin -criminals and authoritarians- continue to drive one another to new heights of unsustainable growth. There can be no doubt that the world has its share of ‘bad guys’. But when we create an order of ‘good guys’ who use the same destructive behavior as their counterparts, we escalate the situation. You cannot fight fire with fire while creating more flammable conditions. Our attempt to compete with social problems by creating new ones is a game that nobody can win. “THE PARABLE OF THE BITTER TEA

When Hypoc was through meditating with St. Gulik, he went there into the kitchen where he busied himself with preparing the feast and in his endeavor, he found that there was some old tea in a pan left standing from the night before, when he had in his weakness forgot about its making and had let it sit steeping for 24 hours. It was dark and murky and it was Hypoc’s intention to use this old tea by diluting it with water. And again in his weakness, chose without further consideration and plunged into the physical labor of the preparations. It was then when deeply immersed in the pleasure of that trip, he had a sudden loud clear voice in his head saying “it is bitter tea that involves you so.” Hypoc heard the voice, but the struggle inside intensified, and the pattern, previously established with the physical laboring and the muscle messages coordinated and unified or perhaps coded, continued to exert their influence and Hypoc succumbed to the pressure and he denied the voice.

There are numerous forces at work in the world which contribute to an existential unease, and with unprecedented technology and population growth, there are no easy answers. In order to survive this critical mass of rapid exponential evolution we are going to have to seek entirely new social orders. The kind which are localized and function through inclusiveness, transparency and voluntary consent. The human condition is such that sometimes, from the endless vat of primordial chaos, comes an individual who threatens the liberty, safety and health of others. They will no doubt have to be dealt with. Yet our current system is creating, rather than discouraging, an endless cycle of feedback consisting of destructive forms of order. The human race will begin solving it’s problems on the day that it ceases taking itself so seriously.

To that end, POEE proposes the countergame of NONSENSE AS SALVATION. Salvation from an ugly and barbarous existence that is the result of taking order so seriously and so seriously fearing contrary orders and disorder, that GAMES are taken as more important than LIFE; rather than taking LIFE AS THE ART OF PLAYING GAMES.

To this end, we propose that man develop his innate love for disorder, and play with The Goddess Eris. And know that it is a joyful play, and that thereby CAN BE REVOKED THE CURSE OF GREYFACE.

And when men become free then mankind will be free.
May you be free of The Curse of Greyface.
May the Goddess put twinkles in your eyes.
May you have the knowledge of a sage,
and the wisdom of a child. Hail Eris.

We are all caught in this trap together. Our very beliefs about our existence and our purpose, meaning and proper course of action have enshrined us in a game that nobody is winning. The ruling elite do not see their folly and those following their orders either do not see it nor care. The bigger problem lies with the rest of us. What we believe about our world and our existence and the narratives that we create weave our patchwork consensus reality. As complex and seemingly impossible the problem of police and other state abuse seems; the solution is really quite simple. We stop believing in it. We stop feeding it with our thoughts and words and actions. There is nothing so ensconced in reality that it cannot be changed by a shift in human awareness. If we choose it. A SERMON ON ETHICS AND LOVE

One day Mal-2 asked the messenger spirit Saint Gulik to approach the Goddess and request Her presence for some desperate advice. Shortly afterwards the radio came on by itself, and an ethereal female Voice said YES?

“O! Eris! Blessed Mother of Man! Queen of Chaos! Daughter of Discord! Concubine of Confusion! O! Exquisite Lady, I beseech You to lift a heavy burden from my heart!”

WHAT BOTHERS YOU, MAL? YOU DON’T SOUND WELL.

“I am filled with fear and tormented with terrible visions of pain. Everywhere people are hurting one another, the planet is rampant with injustices, whole societies plunder groups of their own people, mothers imprison sons, children perish while brothers war. O, woe.”

WHAT IS THE MATTER WITH THAT, IF IT IS WHAT YOU WANT TO DO?

“But nobody wants it! Everybody hates it.”

At which moment She turned herself into an aspirin commercial and left The Polyfather stranded alone with his species.

And if you think this is wild, check out these guys!