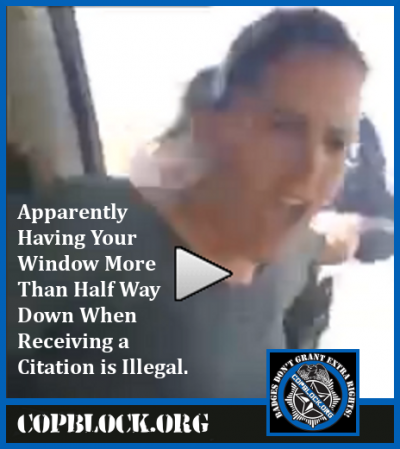 In the video below, we have two women who seem to know their rights, but as you’ll see that will not matter. This is a complete embarrassment to law enforcement and the State of Nevada.

Traffic violations are one of the most common contacts between law enforcement and the public that lead to police brutality and bully behavior. It is a War On The Poor!

Badges Do Not Grant Extra Rights!

Unless of course you are a cop that is ignorant of his own lack of authority, and these officers demonstrate that from the get go. This Nevada officer wants the window to be rolled down all the way to issue a citation. Apparently, more than halfway down just wasn’t sufficient. Of course they intermingle the terms “I’m ASKING you to” and “I’m TELLING you to” in the whole of the contact. See, there is a little grain of understanding that pops out of their mouths now and again when they use words like ASK and PLEASE. Unfortunately, it is generally accompanied with “because I said” and some physical force, of course.

Let me fill this part in for the critics, “if she just would have complied then…”.

He reaches in her car, opens the door, and tells (asks) her to step to the back of the car. When she asks “why”,  the officer responds, “so I can give you your citation.” Over and over, she asks why she needs to exit the vehicle to receive the citation. The real answer, “cause I told you so!” When she questions the legality of being forced to get out of her car to receive the citation, the officer makes this claim:

“It is Legal”, “There is a law, you are mistaken, I’m sorry, but you’re mistaken”

Let me quote an unknown author here, “Ignorance is bliss till you open your mouth, then it’s just evident.”

The officer claims he is trying to be nice. I suppose violating rights and breaking your own laws, not to mention the assault, is considered being nice.

Mollie, one of the ladies in the car says “we had to spend two days in jail, they took all of our money, and we had to get lawyers bond out for 5000 for me and 7500 for Karen”.

Officer proceeds to assault and man-handle this young lady while another officer grabs at the passenger.

KNOW YOUR RIGHTS! ALWAYS RECORD! You never know when an officer will violate your rights.