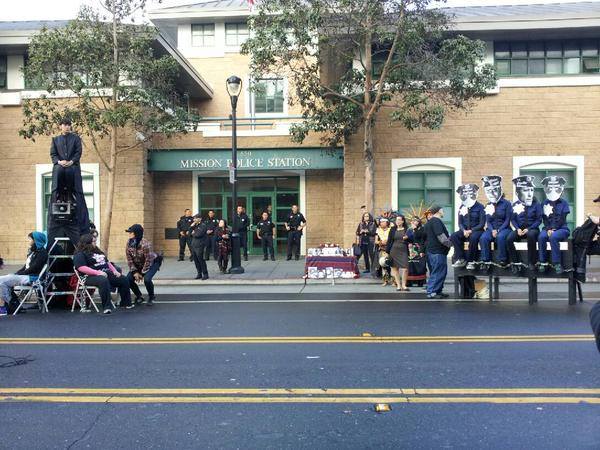 One year after Alex Nieto was shot at nearly sixty times by San Francisco police, protestors have chained themselves to the gates of the Mission District Police Department looking for answers and accountability.

On March 21st, 2014, police responded to a call about a man in a park carrying a taser, who had allegedly threatened to use it on a dog that was encroaching on his property. When police arrived at the scene things quickly went wrong. Officers claim that Nieto then brandished his taser and pointed it at them, which they mistook for a gun, and opened fire. Officers still arriving at the scene after the shooting begun also joined in the gunfire until the body of Alex Nieto lay lifeless, full of almost a dozen bullet wounds. In February, the officers involved were cleared of any wrongdoing in his death, which has infuriated community members. Officers claimed to believe their life was in danger, even after the young man had already been shot multiple times. Despite the fact that police are trained in both firearms and taser usage, officers were somehow unable to differentiate between the two types of weapons and responded as though Nieto was firing at them, which they claim to have believed was happening at the time. On top of this, police used smear tactics, calling in the young man’s past to attempt to justify their bungled killing of an innocent man. Regardless of the young man’s past, family, friends and community members cannot understand why a young man without a firearm was killed in such a brutal way. His supporters paint a much different picture of a vibrant young man who aspired to become a probation officer so that he could assist youth and those in his community in getting and staying on the right track. They also say that Nieto was on his way to work as a security officer at a nightclub, which is why he was in possession of a taser. Many also expressed doubt that Nieto would ever draw a weapon on police, both because of his character and knowledge of the potential consequences. Over the weekend a memorial was held to celebrate his life, mourn his death and to come together as a community to ask questions about this and other incidences of local and nationwide police brutality. This morning that memorial turned into a direct protest at the Mission District police station as opponents of excessive force have gathered and chained themselves to gates, demanding answers and accountability.

If you are in the San Francisco area we urge you to head down and join them in their call for justice.