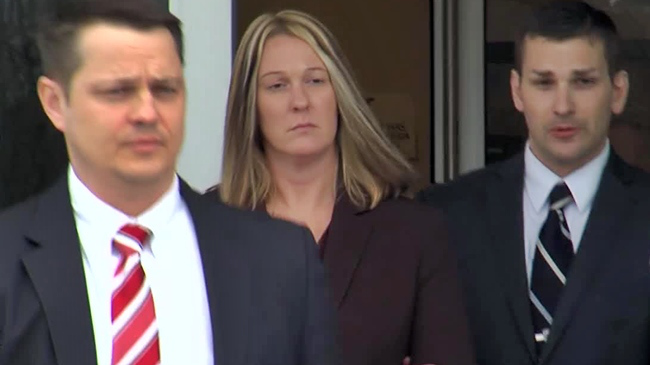 Officer Mearkle stopped Kassick for an expired state safety inspection sticker when he fled the scene. Mearkle eventually caught up to him and tazed him repeatedly, she then decided to shoot him in the back because he refused (or was unable) to show his hands. According to ABC27.com:

The district attorney said Kassick did not have a gun and never brandished anything that could have been viewed as a potential weapon. He said the only item recovered near Kassick was a syringe.

According to the criminal complaint filed by state police, Kassick was not physically aggressive, had no contact with Mearkle, and was not facing her when she fired the first shot. Mearkle again ordered Kassick to show his hands and was still using the stun gun when she fired the second shot, again while Kassick was facing the ground.

“She did not know what this person had under his belly and he kept going to it time and time again,” her attorney, Brian Perry, said. “She felt that pulling that trigger was the only option she had to protect her life.”Mearkle told investigators she fired because she believed Kassick was reaching for a gun in his jacket pocket and because he ignored her orders to show his hands. She acknowledged that she did not see him display anything that could have been considered a weapon, the complaint states.

For those of you that are delighted that this officer is about to go down. Please, don’t hold your breath just yet. This is not the first time a police officer has been charged with some variation of murder. Rocky Ford Police officer, James Ashby, was arrested for fatally shooting Jack Jacquez in front of the victim’s mother in their own home – just last month. Albuquerque prosecutors also brought charges against SWAT team member Dominique Perez and former Detective Keith Sandy for their roles in the shooting death of James Boyd, a 38-year-old homeless man with a history of mental illness who was camping in the city’s Sandia Foothills last March. Those cases haven’t gone through the legal system entirely but I wouldn’t expect much, considering the same “justice” system let Kelly Thomas’s killers walk free.

Sure, it’s nice to see some sort of accountability but I can’t help but think that these officers were just too stupid to drop a gun or give the internal investigation team an easy (though often lame) out. When you storm into someone’s house and shoot them in the back, or while they are face down, then you’re going to need a better story than, “he didn’t put his hands where I could see them.” These goons never got that memo but I’m not convinced that their badge, especially since Mearkle is a 14 year vet, isn’t going to get them some sort of special treatment.

If justice can’t be served to these families then I hope a message is being sent to active LEO’s that there are times you will be prosecuted just like the rest of us. So be careful coppers, don’t draw that weapon too soon and make sure you’re thinking logically… or you might find yourself in a bad place for former cops; prison. Or you could always quit and provide the service of protection via your own business, instead of the government’s way.