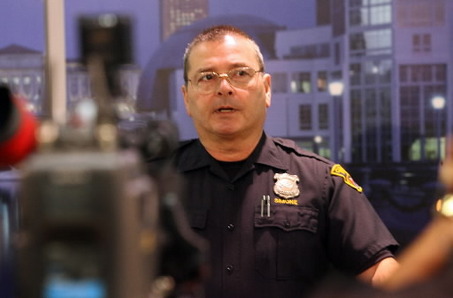 I was reading through my Facebook feed this morning, when I came across a post that was announcing a new documentary on the Timothy Russel/Mallisa Williams shooting here in Cleveland in 2012. Embedded within that post was this article from 2012.

It focuses on Cleveland’s “Supercop,” Jim Simone. Apparently in Cleveland in 2012, according to this article, a supercop is one who’d spent, “nearly 40 hyperactive years arresting enough people to populate a midsize town, writing enough traffic citations to deplete a forest, justifiably killing enough people to fill a morgue, and rescuing enough abused canines to start a decent-sized dog park.”

Jim has been a cop in Cleveland for 35 years. He has shot 11 people and killed five of them. With the recent Department of Justice report documenting at least 10 years worth of excessive force, and civil rights abuses. One has to wonder if Jim really was justified in killing five people in the streets of Cleveland. He was certainly a cop during the DOJ investigation, he was definitely involved in some high profile cases, and this is his attitude when it comes to policing in Cleveland. “I’d rather smack a kid in the back of his head or carefully get the attention of a disorderly than slap them with a felony arrest that may follow them and ruin their lives.” (This is the EXACT reason why you should film police!)

In the article, Officer Jim “Supercop” Simone laments, “Police work has changed. Politicians run the department. We’re not allowed to use the fear of heavy-handed policing to try and influence behavior.” Jim likes the heavy handed tactics that made him infamous among the people of Cleveland and famous amongst his pals within the ranks of the thin blue line. Most of whom, on both sides, embrace the police state, as I’ve observed since moving here from New Jersey shortly after 9/11.

There are at least five people who are no longer with us that might want us to dig a little deeper into Simone’s past. Jim retired from Cleveland police to be a Mayberry type guy. He now works in Grand River, a small town in Lake County. Hopefully, none of the 399 residents of that town ever violate any of the many bullshit laws Simone has sworn to uphold, no matter how ridiculous they are. The one question that didn’t get answered for me in the article is if there’s a law they could pass that Officer Simone WOULDN’T enforce? What if they told you it was illegal to drive a black Chevy tomorrow? What if they told you the penalty was  death and that you were to shoot anyone driving a black Chevy? Would you enforce it? Would you make sure that anyone caught driving a black Chevy feared Supercop’s heavy-handed policing of unapproved vehicle categories? Or is that where you’d draw the line?

In fact, that’s my question for all cops! What law would you not enforce if they told you to? Where is your line in the sand officers?