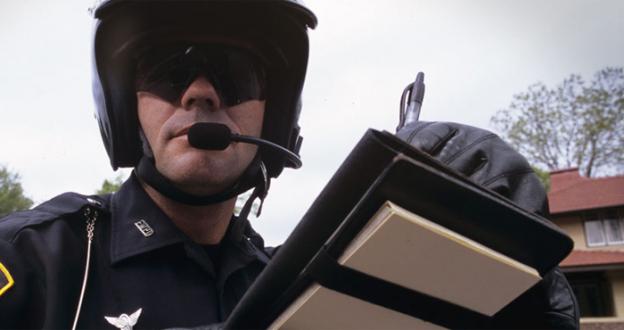 *This is a repost from Truthstream Media sent to CopBlock.org via the submission tab*

My friend and coworker at The Daily Sheeple Lily Dane was terrified tonight after police pulled her over for the high crime of expired tags and it turned into a bullying session that lasted over an hour and that apparently required four cop cars and SIX POLICE.

I guess because we have this many officers and not a lot of actual, dangerous crime going on, they’ve got to justify their jobs somehow… This isn’t protecting and serving. It’s extortion.

Although the initial female officer seemed cordial and made the situation out to be no big deal, her male partner decided to turn the situation into a long, drawn-out bullying session and called Lily a criminal because she “broke the law” (as if all laws are equal and someone with expired tags is on par with, say, a rapist or baby killer), even though Lily has no criminal history and had done nothing wrong at that point other than having expired tags (except, perhaps, maybe for speaking out and being politically active against the police state online as an alternative media journalist).

This video is the story of what happened. I’m sharing it because we live in such an insane police state that something has to change.

As our previous special report exposes, police are using pre-crime algorithms to assign color-coded threat scores to each and every one of us before an officer ever lays eyes on us based upon, among others, our social media and online posts. Is Lily special because of her political views, or is this just the way they treat everyone nowadays simply for driving with expired tags?

How come we can’t leave our houses and get into our cars in this society without being targets to be pulled over and financially raped and potentially imprisoned (or worse) by this gestapo system at any moment? Guilty until proven innocent simply because we got behind the wheel? Not free to openly travel in this society without being continually taxed, fined, and under constant big brother suspicion and surveillance at all times?

Nothing about this is freedom.

Come on, let’s be honest. Having an expired license plate tag isn’t about the safety of our society, it’s about REVENUE GENERATION. PERIOD!

It isn’t a reason to bully and intimidate and harass some lady for over an hour, acting like she was lying about owning her car, lying about her insurance card, and even lying about what state she lived in (even though it was on her driver’s license).

At one point he even threatened her that he could take her car away and throw her in jail if he wanted to just to be an even bigger bully.

She asked how she would get home and he shrugged and went, “a taxi?” She was 45 minutes away from her house at the time, by the way, which was in a neighboring state and it was night time and well after dark. Guess he’d love it if some guy treated his wife that way??

In the end, the hero of the hour just doing his job protecting America from hardened “criminals” by bullying a woman with an honest paperwork issue for over and hour gave Lily a ticket and told her she just “shouldn’t drive” until the matter gets straightened out… I guess because she’s a slave and shouldn’t be allowed to freely travel in her car until she follows bureaucratic marching orders? Never mind that, as one commenter wrote on yet another police state story over gestapo abuse:

Transportation is a COMMERCIAL activity that CORPORATIONS must be LICENSED to conduct along the Common right of way. CORPORATIONS apply for the PRIVILEGE (permit/license) of doing BUSINESS. Travelers not engaged in COMMERCE aka TRAFFIC are doing so because they have a RIGHT to do so.

Know rights or no rights.

Something has got to change, people.

We cannot all continue to participate in this broken, corrupt, tyrannical gestapo-run system that operates like a parasite, feeding on our suffering and enslaving us all…