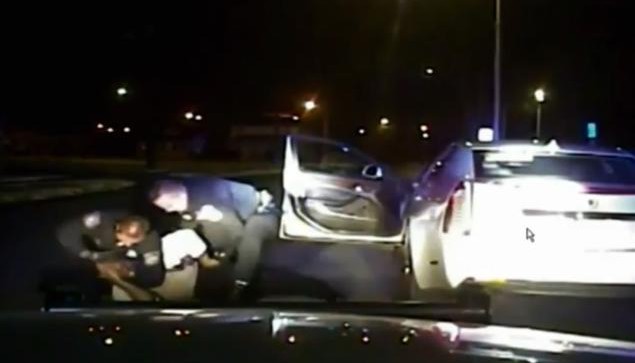 Dashcam video emerged Wednesday showing Michigan police employees choke, beat, and tase a man, after pulling him from his car at gunpoint during a traffic stop.

The footage shows 57-year-old Floyd Dent receive 16 blows to the head, a kick to the arm, and multiple taser strikes during the January 28 incident with Inkster city police.

“I’m lucky to be living,” Dent said Wednesday at a press conference.  “I think they were trying to kill me, especially when they choked me. I was on my last breath. I told them, ‘Officer please, I can’t breathe.'”

Police say they followed Dent’s car into a suburban Detroit neighborhood known for drug dealing and pulled him over for failing to come to a complete stop at a stop sign.

Police claim Dent was trying to flee in his car, but the video tells a different story.

The dashcam footage clearly shows Dent comply with officers by pulling over before opening his car door, in order to address them. At no point does the footage show any attempt at retreat.

Dent can be seen bleeding profusely from his head as officers escort him to a patrol car.

Police say Dent refused to show his hands and made a verbal threat towards the officers, but dashcam microphones were off.

Dent was arrested on numerous charges, including driving with a suspended license, resisting a police officer, simple assault and battery of a police officer, and possession of crack cocaine, which police allege was found in the car.

The Inkster Police employee seen applying the chokehold to Dent has been identified as Ex-Detroit Police Officer William Melendez – who was known as “Robocop” in that department.

While working in Detroit, Melendez was indicted along with 16 other officers in 2003 for the charges of planting evidence, falsifying reports, and stealing seized cash and property.

A jury found Melendez not guilty, but he is again facing claims of planting evidence and falsifying reports in connection with Dent’s arrest.

Dent has no criminal record and a blood test at a local hospital revealed that no drugs or alcohol were in his system. He is scheduled to appear in court in April.