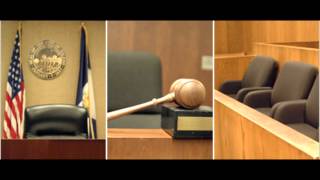 Submitted through the CopBlock.org submission tab by Joshua Edward Williams.

On October 31, 2014, I attended a traffic court date with a friend, Randall McKinney. Before the judge showed up, I noticed an 8 to 10 year old child standing where the clerk of court sits. The child was opening up legal files and reading and writing in them. I thought this was odd and told my friend about it. He didn’t believe me, so I said I’m gonna take a photo and show my law professor.

I thought, from a recent Supreme Court ruling, that I was not in violation of the law. The ruling stated that any where a person has the right to be in public, they had the right to take a photo of anything they can view from that spot. After I took the photo, I was approached by a deputy from inside the court room. He came out and said, “You can’t stand in front of the doors.”

I moved away, but 5 minutes later two sheriffs came out from the court room and approached me. The first one pointed at me and said “That’s him!” The second officer asked if I took a photo. I responded, “I’m not gonna answer that, but if I did, would you like me to delete it”. He replied, “No, I want you to show me so I can charge you with a felony!” I replied “Well I’m not gonna show you my phone then”.

He then had a supervisor come over and he demanded to see my phone. I refused and was asked to go tell the judge why I wouldn’t show my phone. I replied “I don’t have to tell him anything”. He then said, “Well if you won’t show me your phone, you have to leave.”

I said okay and proceed to leave.  When we reached the elevator things changed and they said, “No, you are gonna see the judge and explain to him why you are taking photos”. They proceeded to pick me up and force me to go into the court room where one of the officers asked the judge to find me in contempt. The judge told him, “What do you want me to do? He wasn’t in the court room. He didn’t do anything wrong. You are the deputy, handle it how you see fit”.

When they approached and said “Lets go!” I asked where we were going, and they responded for me not to worry about it. I asked if I could leave, and he said no I’m remanding you into custody.

During this whole encounter I was recording on my phone and I locked my phone preventing them from getting into it, which they tried. After I was arrested the officers can be heard trying to find a charge to charge me with. Once they found my license to carry a concealed weapon, one of the deputies stated, “Well if we charge him with a felony he can kiss his conceal license GOOD BYE.”

Soon after another officer walked in who knew me from the youth football league. He does security for when he is off-duty. He tells them he recognizes me and that I shouldn’t be around kids if I want to act like an asshole. The officer who spoke earlier then stated, “Well if we charge him with a felony he can kiss coaching GOOD BYE.”
He then proceeded to tell the other deputy, “Look up the contempt of court charge. I think it’s a felony.”

I remember reading it over at the booking desk. A supervisor tells him, it’s not. He then says “I thought it was. Well we can still try to get him with felony obstructing an officer.” The supervisor says again, “No you can’t it’s not a felony!” He then tries again and says, “How about felony disorderly?” The supervisor gets stern and says, “NO!” The younger officer then says, “Well I meant just regular disorderly, we can charge him with that until we figure out what else to charge him with.” The older officer concedes and says “Yea, that will at least get him held then you can figure out what else to charge him with.”

Later on, you can hear a different officer, who was in the hallway for the whole encounter outside the court room say, “He didn’t do anything wrong but he was helping his buddy with his ticket,. That’s like practicing without a license we can’t have that.”Later on while, walking over, an officer who had not been involved, but was helping walk me over asked, “Well, if you didn’t do anything wrong, why did you refuse to ID?” I responded by saying, “I asked him if he suspected me of a crime and he said no, so I don’t have to ID.” He then said, “He doesn’t have to suspect you of a crime to demand ID.” I said,”You’re wrong!” and I stated the statute to him from memory. On the recording, I stated,
“The statute says anyone in a public place, who a law enforcement officer suspects of, committing a crime, going to commit a crime, or being a witness to a crime, must provide name, age, and address.”

He then says, “See?  Your trying to find a loophole! Your just like my kids! You try to find loopholes! I acted like that as a child. Then I grew up an learned to respect those with authority. Maybe this will teach you a lesson!” I asked, “So I was arrested to teach me a lesson?” The young officer from earlier who was walking me over said “Yep!” I said, “Well this is a good lesson. Do what officers say even if it’s illegal”. “That’s enough talking shut up!” Was his answer.

I believe this arrest showed that I was arrested to get access to my phone which is a violation of my Fourth Amendment rights. I believe a lot of my rights were violated in the arrest, and subsequent arraignment. At my arraignment, I was read the charges and asked how I plead? I asked to see the charges. The judge proceeded to ask if I was an attorney. No was my reply. He then asked, “Why do you need to see the charges?” I replied, “Because I have a right to see them before pleading and I never got to know what I was being charged with even after they released me.”

He asked if I had an attorney.  Again, I replied no. He asked if I planned to hire one. “No I am disabled.” was my answer. He then asked some more question and determined that I am entitled to a public defender. He asked the bailiff to hand the list of charges to a gentleman that was seated next to him. The judge said he will talk to you out side was what I was told. The gentleman took me out into a side room where he asked, “How did you bail out if you need a public defender?” “A friend bailed me out.” I replied.

He also asked, “Are you an attorney?” “No.” I replied and he stated, “Then don’t try to be one!” He then stated,“I’m only gonna ask the judge one thing and that is to relieve me. I would advise you to remain quiet.” He then proceeded to enter a plea of not guilty and ask the judge to relieve him from this case because he could tell “we would not see eye to eye.” I tried to speak and was told to remain silent by the judge, he then proceeded to remove him without my input.

The judge then asked if I planned to hire an attorney. As I told him earlier I am disabled I can’t afford an attorney. He said, “So you are going pro se? You are gonna defend yourself?” I said, “No, I want a public defender.” He replied “Well you can’t have one. I just relieved him, so you are either gonna have to hire an attorney or represent yourself.”
I tried to argue, but he said he had made his ruling next case! I then tried to ask about rule 12, and was again asked if I was a lawyer. I was also told that I should not try to pretend to be one and he was not gonna rule on anything I had to say.

I cannot believe that in today’s society this is occurring and this is not an isolated incident. The friend I spoke about earlier is a witness to this happening to me. This exact same thing happened to him on the day of my arrest. He was offered a deal by the public defender. He refused and asked to go to trial. He was told I don’t do that and she had herself removed, leaving him with no attorney. At his next hearing in front of Judge Christensen he again asked for a public defender in which he was told you already had one and she was removed.

When he asked the judge “How can that be done I didn’t fire her?” Judge Christensen replied “You didn’t hire her you can’t fire her, I removed her.” He was then told, just like I was, that now he had a choice.  He could hire an attorney or represent himself. Even though he was determined to be indigent and eligible for a public defender. Usually, I thought that if the public defender’s office was relieved from the case the judge would then appoint a private practice attorney to defend the defendant. Is that not true?

Thank you for your time and consideration,
Joshua Edward Williams