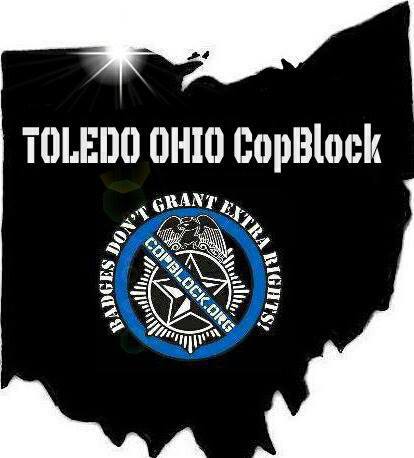 Police in Ohio seem to not be able to understand the job very well. Local news got a story of a Toledo cop punching a handcuffed suspect in the face. The female officer walks over and hauls off and hits the handcuffed man right in face as he bends down to allow the officer behind him to adjust the cuffs. “Police brutality captured at its finest,” says Brad Bollinger, the neighbor who shot the cell phone video. Even the Toledo Public Relations officer agrees it is police brutality just from looking at the video!

I was in Toledo not to long ago and thought I made it crystal clear with the protest and the Robin hooding video, and the interaction I had with Toledo police that they understood they were being filmed. I guess we’ll have to get David Evans and Toledo Cop Block out there to hook up with Brad and make sure they get the message loud and clear!

This is not the first time TPD has been in the spotlight. I was there in October of last year at a rally to arm the police with body cameras. The people of Toledo felt the need for such an outcry in light of recent TPD brutality and misconduct cases. While I was there I decided to do a little Robin Hooding with Larry Kiddey of Ohio Valley Cop Block, and we got to speak to a few TPD officers and informed them of the public’s right to record them. They agreed we had that right and we went on our way.

What’s really weird to me is that I have witnessed here in Parma, and in other places I have visited and lived, when someone assaults someone in front of a gaggle of cops, regardless if they already have someone else in custody, they always swarm the person doing the assaulting. In the video, I see at least eight cops and a dog, stand there and allow their fellow officer to assault this man! AND THEN! Let her walk away from the scene without handcuffs on! I think ALL the officers involved should be charged with conspiracy! This is why I as a Cop Blocker have a problem with the police.

You can even see that when he is struck, the folks on the sidewalk start to react and the cops go rushing over as if they are going to do something to that officer. And they should expect that the family of the victim would want to retaliate against the attacker! Especially when eight cops stand around and do nothing when one of theirs assaults their brother or father, or whatever! These people then have to watch a gang of thugs that just allowed one of theirs to assault their family member, take that person to the police station, out of their sight, and trust that he will make it there alive? I call bullshit!!

To emphasize this point even further. As I write this, I am informed by a Toledo Cop Blocker that another person has died in TPD custody last night. So we are supposed to trust police with all this information we have about the bad ones? Especially when we are finding out daily how this is not a once in while occurrence.

You can check out the Toledo protest video and the Robin Hooding video and other videos on Greater Cleveland Cop Block’s You Tube Channel.